The Celtics head to Cleveland for a big game against LeBron James and the Cavaliers.

Share All sharing options for: Celtics visit LeBron and his Cavs as they continue to push for the playoffs


The Celtics head to Cleveland for a big game in their playoff push. This is the 2nd of 4 games this season. The Heat won the first 2 games 122-121 in Boston in November and 110-79 in Miami in March. They will meet for the 4th and final time on Sunday in Boston.

After the Cavs clinched the number 2 seed on Wednesday, LeBron hinted at possibly sitting out the next two games in order to rest up for the playoffs. However, LeBron announced today that he plans to play in this game. Hopefully he decides to sit out on Sunday to possibly give the Celtics a better chance at winning at least one of the games. The Cavs are 2-9 without LeBron this seasoon. Perhaps Kyrie Irving would want to rest in this one, which would also be helpful.

The Celtics currently are the 7th seed in the East and if they remain there, this home and home series would be a preview of the first round of the playoffs (minus any resting players, of course). The Cavs have won 18 straight at home and have held opponents to 91.2 points on 40.5% shooting in those games. They are also 21-0 at home when they score at least 100 points. The Celtics have won 4 of their last 5 games and their last 5 road games.

The Celtics are 2 games behind the Bucks for the 6th seed. They are tied with Brooklyn but occupy the 7th spot because they own the tie breaker. They are 1 game ahead of Indiana and 1.5 games ahead of Miami who lost to the Bulls at home on Thursday. Charlotte is 2 games back of the Celtics. Games to watch are Charlotte at Atlanta, Washington at Brooklyn, and Indiana at Detroit. 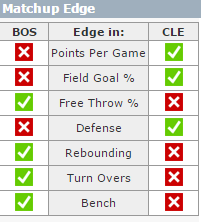 Marcus Smart vs Kyrie Irving
Irving is one of the top point guards in the league and will be a tough matchup for Marcus Smart. He is averaging 22 points, 3.2 rebounds and 5.2 assists per game. Smart will need to play tough defense to try to slow him down.

Evan Turner vs LeBron James
LeBron James is a tough cover for anyone and he will definitely be tough for Evan Turner. Jae Crowder may be more effective defending LeBron if Evan struggles. And Brandon Bass has also done well in the past guarding him. But no matter who guards him, it's next to impossible to shut him down.

Honorable Mention
Brandon Bass vs Kevin Love
Love is also a tough cover. He is averaging 16.4 points, 10.0 rebounds, and 2.3 assists. He is a very good 3 point shooter and can also take the ball into the paint. Bass will have his hands full trying to keep up with him.


Keys to the Game
Defense Defense Defense!! Defense is key to winning every game. The Celtics' defense has been much improved of late, but they still need to increase their efforts on that end. The Cavs are 21-0 at home when they score 100+ points. The Celtics are 7-34 when they allow their opponents to reach 100 points. It will be very important for the Celtics to play tough defense and keep the Cavs below 100 points

Push the Pace - The Celtics need to push the pace of the game and keep the Cavs running. If they do, they will have a chance to get some easy points before the Cavs defense sets up. When the Celtics walk the ball up and slow the game down they struggle. They have to run and they have to move the ball. No hero ball.

Effort - The Celtics have won their games by putting out more effort than their opponents. They don't have the talent that the Cavs do, so they have to make up for it with effort and aggressiveness. Their effort was very poor in the last meeting between these two teams and they lost by 31. They have to be the first team to loose balls and rebounds, and they have to be the team that works harder if they want to have a chance to win this game.

Play 48 Minutes The Celtics have to play hard for 48 minutes from the opening tip to the final buzzer. They can't afford to let the Cavs get a big lead because the Cavs are a very good defensive team and it won't be easy to dig out of a hole against them. They also can't let the Cavs back in it if they can manage to build a lead.

Go to the Hoop - The Celtics need to go to the hoop and get into the paint. 3-pointers are nice and all but when they aren't falling, they can take a team right out of a game. The Celtics need to drive more and not rely as much on shooting from beyond the arc, especially when they aren't falling. They drove into the paint against the Pistons and it worked out very well for them.

Play Hard No Matter Who is Playing - Sometimes when a team is missing key players it seems as though the Celtics underestimate them and don't play quite as hard. There is a good chance that at least one and maybe more of the Cavs' stars will sit this one out. The Celtics have to give 100% effort no matter who is playing for the Heat.

X-Factors
Who Plays and the Officiating
If LeBron and/or Kyrie sit the game out, it would make a win a little easier to get. With the whole team playing, it would be a very tough game to win on the road in an arena where the Cavs have win 18 straight. Also, the officiating makes a difference. Most of the time, the Cavs get more than a little help from the refs. Against the Pistons, it was nice to see the Celtics get the calls for once but we can't expect that against the Cavs (unless for some very bizarre reason the league actually wants the Celtics in the playoffs). The Cavaliers (and any team LeBron is on) usually get special treatment from the refs. If you saw Shaqtin' a Fool this week, you saw Perk take 9 steps all around as he was looking to pass and they didn't call him for a travel in spite of the fact that the ref was looking right at him. The Cavs get that kind of special treatment.

In a game earlier this season against the Cavs, the refs called the game fairly even for 3 quarters and then very one sided for the Cavs in the 4th quarter with the final free throw disparity 37-23 in favor of the Cavs. There were several obvious bad calls against the Celtics that even Cavs fans questioned. Against Memphis this season, there were quite a few terrible calls, the worst of which when the ball very obviously hit the rim on a shot to beat the shot clock. The Celtics got the rebound and put the ball back in and at that point, they called a 24 second call on the last shot. The Celtics are 2-4 this season and 4-6 in their last 10 games with Spooner while the Cavs are 1-2 this season and 3-7 in their last 10 with Spooner. His home team W/L record this season is 29-28 so he's not easily influenced by the home crowd.


Justin VanDuyne
Justin VanDuyne is one of three new officials for the 2014-15 season. VanDuyne joins the staff after four seasons as a referee in the NBA D-League, already having officiated 16 regular season NBA games as a non-staff official. Prior to joining the NBA, Van Duyne officiated in numerous college conferences including the PAC-12, Mountain West, Big West, WCC, and WAC. Already in his young career, Van Duyne was part of a poorly called game where the Timberwolves shot 32 free throws to just 9 for the Celtics and there were a number of questionable calls the entire game. Even Wolves fans were commenting on how many breaks they were getting. The Cavs are 4-1 with Van Duyne while the Celtics are 0-6 for his career. Alson not influenced by the home crowd, his home W/L record this season is 25-27.

Gary Zielinski
Gary Zielinski has officiated 787 regular season games and 11 playoff games. In addition to his 13 seasons in the NBA, Zielinski officiated for seven seasons in the CBA and four in the WNBA. Zielinski worked the CBA Finals from 1997-2000, the CBA All-Star Game in 1995 and the WNBA Finals from 1998-2001. In an incident two seasons ago, Zielinski was accused of cursing at DeMarcus Cousins when giving him a T but nothing ever came of it as far as was reported. The Celtics are 2-1 this season and 5-5 in their last 10 games with the Celtics and the Cavs are 1-2 this season and 6-4 in their last 10. Zielinski is a homer ref with a home W/L record of 43-13 this season.