The Celtics host the Raptors in their last home game of the regular season.

Share All sharing options for: Celtics host Raptors in final home game of the regular season

The Celtics host the Raptors in their last home game of the regular season. This is the 4th and final meeting between these two division rivals this season. The Raptors lead the series 2-1, winning one game in Boston in November and one in Toronto in January. The Celtics won their last meeting in Toronto on April 4.

The Raptors seemed to have that one won as they led by 1 point with just 2.6 seconds left but Marcus Smart hit the game winner at the buzzer to give the Celtics a 117-116 win. Toronto fans called foul, saying that the time keeper didn't start the clock on time, but the Celtics came away with the win. So, the Raptors have a very good reason to want to win this game.

They also have other motivation to want this game. They are still fighting for playoff positioning. They clinched home court in the first round regardless of their opponent. They are in the 4th spot, half a game behind the Bulls. If they remain the 4th seed, they would play the Wizards but if they move up to the 3rd spot, they would face the Bucks.

The Raptors are on the last game of a 4 game road trip. They are 3-0 on the trip so far, having beaten the Hornets, Magic, and Heat so far on the trip. They have a chance to go 4-0 on a road trip for the first time in franchise history. Also, a win in this game would set a new franchise record for wins in a season.

The Celtics have clinched the playoffs by virtue of the Bulls beating the Nets on Monday night. So, whether they win or lose this game, the Celtics will be in the playoffs. Their positioning is still in question, however. They are one game ahead of Indiana, who slipped into the 8th spot by half a games. Winning should keep them in the 7th spot. A couple of losses combined with an Indiana win would drop them to the 8th spot.

They are in the playoffs regardless of the outcome of this game. Even though the Hawks might be a more attractive matchup for the Celtics, since they have beaten them once already, Brad Stevens will want to win both games to go into the playoffs with confidence and on a winning note. 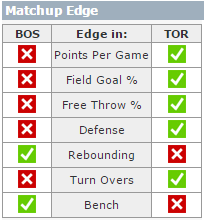 Avery Bradley vs DeMar DeRozan
DeRozan is capable of putting up a lot of points in a short time as they found out last game. DeRozan finished that game with 38 points. He is averaging 20.1 points, 4.6 rebounds, 3.5 assists, and 1.2 steals. Avery will need to work on defense to keep him from having a big game.

Marcus Smart vs Kyle Lowry
Smart has been compared to Lowry more than once and both are tough defensive point guards. Lowry is averaging 17.7 points, 6.8 assists, and 4.7 rebounds per game. Marcus needs to play tough defense to keep the Raptors from getting into their sets quickly and to keep Lowry from having a big game.

Honorable Mention
Isaiah Thomas vs Lou Williams
Williams is the Raptors' offensive threat off the bench and is capable of putting up a lot of points in a hurry as evidenced by his 27 points in their last game vs the Celtics. Isaiah Thomas can do the same for the Celtics and hopefully he has a better night than Williams. Both are in the discussion for 6th man of the year and their head to head matchup may garner one or the other some votes. Williams is averaging 15.5 points, 2.0 assists and 1.5 rebounds per game.


Keys to the Game
Defense
Defense has always been and always will be the key to winning. The Celtics defense was exceptional against the Cavs in the last game. When they play tough defense it also brings more energy to their offense. The Raptors are 4th in the league in scoring at 104.3 points per game so it will be very important to bring tough defense right from the start and keep it up throughout the game.

Be Aggressive
The Celtics must be aggressive on defense, in going after loose balls, in crashing the boards, and just all around going all out. They have to aggressively attack the basket. They need to start the game with that aggressive attitude and be aggressive through the whole game with no let up.

Rebound
The Celtics must crash the boards. They can't score if they don't have the ball. Much of rebounding is effort and desire. The Celtics have to be the team that puts out more effort from every player to go after rebounds.

Run and Move the Ball
The Celtics need to run on every possession and get up the court before the defenses get set up. When the Celtics slow down, they don't play very well and so they need to run throughout the game. They also have to move the ball and find the open man. When they over-dribble and slow it down, their offense gets stagnant. The Celtics must run and keep the ball moving.

Start Strong The Raptors are 29-7 when they lead after the first quarter. The Celtics need to get off to a strong start and then keep playing hard through the final buzzer. Brad Stevens called their game against the Cavs a complete game and they need another game like that to get a win in this one.

X-Factors
Home Game, Motivation and Officiating
This is the Celtics final home game of the regular season and the crowd will be very excited knowing that they will have playoff basketball this year. The crowd should give the team an extra boost. The Celtics should be motivated to close out the season strong and to enter the playoffs on a high note, but then again, they may be motivated to miss the Cavs in the first round. I can also see the refs being given the orders to be sure the Celtics win to assure what they consider an easy first round matchup for LeBron and his minions.

Derrick Stafford
Over his 26 NBA seasons, Derrick Stafford has worked 1,534 regular season, 123 playoff, and seven Finals games. He was a member of the crews that officiated the 1992 Legends All-Star Game in Orlando, the 1997 McDonald’s Championship in Paris and the 2002 NBA All-Star Game. The 24-year NBA officiating veteran has also served twice on the Executive Board of the National Basketball Referee Association. Stafford has six years of CBA officiating experience, and he officiated Pro-Am basketball for six years. He also has seven years of collegiate officiating and 10 years of high school officiating experience in Georgia where he worked the state finals. While at Morehouse College he played football for two years and baseball for four. Stafford made All Conference three years in baseball and led the confereence in hitting in 1978. He was also co-most valuable player in baseball with NFL referee Jerome Boger in 1976. Stafford is the founder and president of his own foundation, "Don’t Foul Out, Inc.".

The Celtics are 0-4 this season and 3-7 over the last 10 games with Stafford on the court. In one win over the Magic last season, the Celtics took 14 free throws to 9 for the Magic and the refs let them play on both sides. The officiating in the first game against the Cavs this season was one skewed slightly to the Cavs, but again, they let them play with the Celtics shooting 13 free throws to 14 for the Cavs. Two seasons ago, in a loss to the Lakers, the officiating was terrible and the Celtics shot just 5 (yes, that's FIVE) free throws to 20 for the Lakers so he can be good and he can be bad depending on the game. The Raptors are 1-3 this season and 3-7 over their last 10 games with Stafford. His home W/L record this season is 35-25.

After leaving the Navy, Richardson decided to pursue officiating full time. Since joining the NBA staff, he has officiated 1,106 regular season games and four playoff games over the past 19 seasons, and was a member of the crews that officiated the 2000 Schick Rookie Game, 2000 NBA All-Star Saturday and the 2003 Japan Games. Richardson has three years of CBA officiating experience as well as 10 years of Pro-Am officiating experience, including the 1992 Pro-Am Nationals. He also has three years of collegiate officiating experience in the Big East, Southeastern and Ohio Valley Conferences. Richardson spent eight years officiating in Virginia high schools, where he worked the VHSL State Tournament. There's not a lot of controversy surrounding Richardson and for the most part, he hasn't been bad in calling the Celtics games. His home W/L record is 36-27.

Eli Roe
Eli Roe has officiated 499 regular season games during his first nine NBA seasons. Prior to joining the NBA staff, Roe officiated in the CBA, NBA Development League and WNBA. He officiated in the NBA D-League Finals for two years, the D-League playoffs for four years and the WNBA Playoffs for two years. At the collegiate level, Roe refereed in the SEC, ASUN and OVC conferences and numerous Division II and III, NAIA and Juco league games. He also worked in four Division I postseason conference tournaments.