The Celtics close out the regular season with a visit to the Milwaukee Bucks.

Share All sharing options for: Celtics visit Bucks looking to close out the season with their 6th straight win


The Celtics close out the regular season with a visit to the Milwaukee Bucks. The Bucks lead the series 2-0 with one win at home and one win in Boston. The Celtics have won 5 straight and are looking to close out the season on a strong note. The Bucks are set in the 6th spot and will more than likely rest some of their players.

The Celtics are set in the 7th spot for the playoffs and Brad Stevens has said that he will also probably rest some of the Celtics in this one. Avery Bradley left the game against the Raptors with an injury and won't make the trip. Expect to see some James Young and possibly Chris Babb and Gigi Datome tonight.

I have no idea who will actually play or start in this one and so the starting lineups are just a guess. Both teams will make finishing the game without any injuries a priority. This should resemble a preseason game where both teams experiment with lineups and the end of the bench. 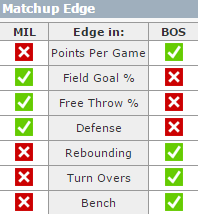 Marcus Smart vs Michael Carter-Williams
Carter-Williams is averaging 14.4 points, 5.4 rebounds and 6.7 assists for the season. He has had 3 triple doubles this season, but all before the trade to Milwaukee. At 6'6", the presents a matchup problem for many teams at the point. Evan Turner may guard him if Smart can't keep him in check.

Jae Crowder vs Giannis Antetokounmpo
The Greek Freak, as Antetokounmpo is called, has been playing very well and will be a challenge for Jae, if he plays that is. He is averaging 12.8 points, 6.8 rebounds, and 2.5 assists and is tough to matchup with on both ends of the court. If this is indeed the matchup at the starting forward, it will be a good test for Crowder on the defensive end.

Be Aggressive - The Celtics need to be aggressive on defense, in going after loose balls and rebounds, and in driving to the hoop. They have to be the team that plays harder and wants the win more.

Defense - Defense is always the key to winning. The Celtics have got to concentrate on getting stops and on defending the Bucks in the paint as well as on the perimeter. As Brad Stevens said, they need to have a defensive DNA and play tough team defense for 48 minutes.

X-Factors
Who Plays and No Injuries
The key to this game will be to play hard but to avoid any injuries that may linger into the playoffs. It will be important to play the right way, but to avoid injuries.

He was lead official in the Nets game that resulted in a brawl the season before last. Capers gave Doc a T for yelling to Rondo. They let the Nets get away with pushing and shoving and hard fouls the entire first half. The Nets shot 17 free throws to 5 for the Celtics in the first half and 3 of those free throws were on technicals. They did better in the second half after the brawl, but the refs' failure to call the game evenly in the first half led to the fight. This season, he called the Golden State game and made a terrible call to end the first half on a last second heave. Even the Warriors fans thought it was a terrible call. The calls all went the Warriors way down the stretch and Warriors fans couldn't believe how they were getting the benefit of all the questionable calls. The Celtics are 1-6 this season and 1-9 in their last 10 games with Capers. The Bucks are 3-3 this season and 4-6 in their last 10 with Capers. He is a homer ref with a home W/L record this season of 38-23.

Eric Lewis
Lewis has spent the last 10 seasons in the NBA, officiating 618 regular season games and 14 playoff games. Lewis spent two years working in the USBL, officiating the Finals in 2002 and 2004. Prior to that he spent three seasons in the NBA D-League, where he worked the 2003 and 2004 Playoffs and 2004 Finals. He tallied eight years in the college ranks, participating in the Atlantic Sun, Ohio Valley, Sunshine State, Florida Sun and Mid-Florida conferences. Lewis officiated in Florida high schools for six years. With the exception of a Cavs game that was called pretty much one sided, and the Hawks game this season that was also called one sided toward the Hawks down the stretch, Lewis has been pretty good in calling the Celtics games. The Celtics are 2-3 this season and 4-6 in their last 10 games with Lewis. The Bucks are 1-5 this season and 3-7 in their last 10 with Lewis. His home W/L record is 35-30.

Ben Taylor
Ben Taylor is in his second season as an NBA referee. Taylor joins the full-time staff after six seasons as a referee in the NBA D-League, already having offciated 17 regular season NBA games as a non-staff official. He also serves as an FIBA International Basketball Referee.

This is Taylor's second game with the Celtics this season. The first was against the Magic where the officiating was terrible. The Celtics were mugged all night with no calls while they were called for ticky tack contact with the Magic. Orlando shot 28 free throws to 20 for the Celtics, but 6 of the Celtics' free throws were intentional fouls at the end of the game. They are 2-7 over Taylor's career. The Bucks are 2-2 this season and 7-3 over their last 10 games with Taylor as a referee. His home W/L record this season is 26-26.