Cavaliers at Celtics - Game 4- It's win or go home time

The Celtics will try to avoid being eliminated in their first round series as they host the Cavaliers in game 4.

Share All sharing options for: Cavaliers at Celtics - Game 4- It's win or go home time


The Celtics will try to avoid being eliminated in their first round series as they host the Cavaliers in game 4. The Celtics have challenged the Cavs in the first three game but have come up short in all three, although they have come closer to a win with each game.

The talk after the Celtics Saturday practice was that there would be a change in the starting lineup as Brad Stevens tries to get more rebounding and energy into the starting lineup. Although the coach wouldn't confirm the changes, Evan Turner, Avery Bradley, Jae Crowder, Jonas Jerebko, and Tyler Zeller were wearing the green practice jerseys that usually signify the starters while Marcus Smart and Brandon Bass were wearing white jerseys.

The Turner, Bradley, Crowder, Jerebko, Zeller lineup was the Celtics' most effective lineup in Thursday's Game 3 loss. They recorded a collective plus 10 rating in 15 minutes together. That was the lineup that Brad Stevens started the second half with and they played very well together. It appears that Bass will remain in the starting lineup but we may see more of Jerebko if Bass is struggling.

In Game 2, Jonas Jerebko was limited by a sore calf muscle but he played well in game 3 and practiced with the starters on Saturday. Jared Sullinger sat out Saturday's practice with an injury to his tailbone that he sustained in game 3. Although he struggled on Saturday, he is listed as probable for game 4. Sullinger finally seemed to be getting his timing back in game 3 and hopefully this won't be a setback for him.

The Cavs are holding the Celtics to .431 shooting in the series, while shooting .450 themselves. The Celtics will need to shoot better and if their jumpers aren't falling, find a way to get into the paint. The Celtics improved on the boards in game 3, but they are going to need an even better effort in this game, especially down the stretch.

No team has ever come back from an 0-3 deficit in the playoffs and not many have hopes that these Celtics will be the first to do so. But, even one win in the series would be a big boost for this young team. Hopefully the Celtics can put it all together in this game to keep the Cavs from celebrating in the Garden. 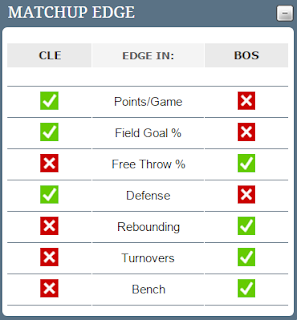 Avery Bradley vs Kyrie Irving
Although Evan Turner is expected to start at the point and Avery Bradley at the two, expect Bradley to get the task of guarding Irving and Turner will be on JR Smith. Irving wasn't quite as effective in game 3 as he was in games 1 and 2 and hopefully, they will be able to slow him down again in this game.

Jae Crowder vs LeBron James
Although it's next to impossible to stop LeBron, Jae has been pretty good in slowing him down somewhat and making him work for everything he gets. It will be key once again to slow him down and make him work on both ends of the court. Kyrie Irving and Lebron James have either assisted or scored every single point in the 4th quarter so far in this series. Guarding them, especially in the 4th quarter will be key to getting a win in this game.

Honorable Mention
Brandon Bass vs Kevin Love
Love had his first big game in Game 3 and it will be important for the Celtics to slow him down and keep him from getting comfortable. Bass will also have to go at him on the offensive end and make him work harder on defense. If Bass starts slow, we could see more Jerebko on Love down the stretch.

Keys to the Game
Defense Defense Defense!! The Celtics must play tough defense and concentrate on getting stops. They need to pick up their defensive intensity both in the paint and beyond the arc. The Cavs have won 30 of their last 31 games when they reach 100 points. The Celtics have to find a way to play tougher defense and to slow them down.

Rebound - The Celtics must crash the boards as a team to prevent the Cavs from getting second chance and fast break points. They also need to rebound to give themselves extra possessions and to fuel their running game. They were out-rebounded 46-34 in the first game and 47-39 in Game 2. They tied the Cavs with 45 rebounds a piece in game 3. They allowed the Cavs to get key offensive rebounds in down the stretch in all 3 games. Boxing out and crashing the boards must be a priority in this game.

Play with Effort and Be Aggressive- The Celtics don't have the talent that the Cavs do, so they have to make up for it with effort and aggressiveness. They can't afford to come out with less than a full 100% effort. Hopefully the change in the starting unit will allow them to be more aggressive from the start. They have to be the first to get to loose balls and rebounds, and they have to be the team that works harder if they want to have a chance to win this game. There can be no let up!!

X-Factors
Officiating and Poise
The officiating is always an X-Factor, especially when playing the Cavs. The first two games were called in Cleveland's favor but game 3 was called fairly even, letting both teams play. Hopefully this game will once again be called fairly.

Brad Stevens called the Celtics out for lack of poise after game 3. The effort was there but, being a young team lacking experience, they could use a bit more poise, especially down the stretch. They can't let themselves get rattled and just have to keep working and playing hard.

The Celtics are 1-2 this season and 4-6 in their last 10 games with Brothers while the Cavs are 2-1 this season and 4-6 in their last 10. Two seasons ago, in a game vs the Knicks, twice Brothers made the correct call from across the court after Dick Bavetta, who was standing right on top of it, missed the call. All in all, Brothers is one of the better refs in the league. But, inexplicably in the last game against the Lakers, he was terrible. He was the referee who ejected Isaiah Thomas on a bogus technical call, which has since been rescinded. He also missed a clear travel and double dribble by Lin right in front of him at a very crucial time. There were bad calls and bogus calls all game. The Lakers shot 38 free throws to 27 for the Celtics. Even the Lakers fans were complaining about the officiating going their way all game. Here is a comment from the Lakers boards that says it all, "The Refs are screwing our tank." Other than that game he has been a decent ref so who knows what we will get in this game. His home win/loss record this season is 39-28.

In the past, Goble has been good in some games and terrible in others. He was the referee who called the clothesline on Barbosa in a Nets game 2 seasons ago a regular foul. He also called a foul at the end of that game on an obvious clean steal that could have changed the outcome of the game. In a Clippers game last season, he ignored fouls by the Clippers and called phantom fouls on the Celtics all game. Tommy made the comment that the Celtics had no shot to win after the officiating took over. This season against the Timberwolves, the officiating was terrible and the Wolves shot 32 free throws to 9 for the Celtics. In the last game he called for the Celtics this season against the Pacers, there were quite a few head scratching calls prompting Tommy to yell "That's terrible" several times. The Celtics are 3-2 this season and 5-5 in their last 10 games with Goble and the Cavs are 3-2 this season and 5-5 in their last 10. He us a homer ref with a home W/L record of 43-23.

After leaving the Navy, Richardson decided to pursue officiating full time. Since joining the NBA staff, he has officiated 1,106 regular season games and four playoff games over the past 19 seasons, and was a member of the crews that officiated the 2000 Schick Rookie Game, 2000 NBA All-Star Saturday and the 2003 Japan Games. Richardson has three years of CBA officiating experience as well as 10 years of Pro-Am officiating experience, including the 1992 Pro-Am Nationals. He also has three years of collegiate officiating experience in the Big East, Southeastern and Ohio Valley Conferences. Richardson spent eight years officiating in Virginia high schools, where he worked the VHSL State Tournament. There's not a lot of controversy surrounding Richardson and for the most part, he's been decent in calling the Celtics games. The Celtics are 4-2 this season and 5-5 in their last 10 games with Richardson while the Cavs are 3-3 this season and 6-4 in their last 10 with Richardson. His home W/L record is 38-27.