Celtics continue their playoff push as they visit the Detroit Pistons

The Celtics continue on their quest to the playoffs as they visit the Detroit Pistons and look to avenge their March loss to them.

Share All sharing options for: Celtics continue their playoff push as they visit the Detroit Pistons

This is the third and final game between these two teams this season. The series is tied 1-1 with the Celtics winning one game in Boston and the Pistons winning their last meeting in Boston. Both of their previous games went into overtime. The Pistons snapped an 8 game road losing streak with their last win in Boston. Marcus Smart was serving his one game suspension in that game and Sully and Isaiah Thomas were both out injured also.

Greg Monroe has missed 11 games with a right knee strain. He practiced with the team on Monday and is expected to start for the Pistons in this game. Spencer Dinwiddie is questionable with an ankle injury and Brandon Jennings is out with an Achilles tear. Jae Crowder didn't practice on Monday with an ankle sprain but is expected to play in this one.

Jonas Jerebko and Gigi Datome are making their first trip back to Detroit since the trade deadline when they were sent to Boston for Tayshaun Prince. I'm sure that they would very much like to show the Pistons and their fans that they are capable of helping a team win, a chance they didn't get with the Pistons for the most part. 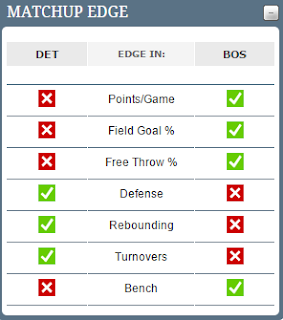 Marcus Smart vs Reggie Jackson
Jackson is very quick and is always a threat to drive to the basket. He is averaging 14.3 points, 4.3 rebounds, and 5.6 assists. Marcus Smart missed the last meeting between these two teams and the Celtics will very much need his defense to keep Jackson from having a big game.

Tyler Zeller vs Andre Drummond
Drummond is a beast in the paint and is averaging 13.6 points, 13.4 rebounds and 1.8 blocks per game. Zeller is going to have to play very well on both ends of the court to keep him in check.

Honorable Mention
Brandon Bass vs Greg Monroe
Monroe is rejoining the team after missing the last 11 games with a knee injury and is expected to start. The Pistons have played very well without him in the lineup and there are questions as to how he will fit in on his return. He is a very good player and he will also be a free agent this summer so his play down the stretch will be important for him. Will his return help or hurt the Pistons?

Play as a Team - The Celtics have to play as a team and move the ball to find the open man. They have to defend as a team and rebound as a team. Hero ball rarely wins games and so they need to have each other's backs and play together.

Focus and Motivation
The Celtics are on the road and have to stay focused and try to block out the distractions and hostile crowd that come with being on the road. They also have to keep their goal of making the playoffs at the front of their minds and give 100% effort to make it happen.

After one of the Celtics playoff games in Chicago in round 1 in 2008, there was some controversy when he was seen leaving the arena with his family all decked out in Chicago Bulls gear (along with Marc Davis and his family). He was in the news last season because he was accused of having a bias against Marc Cuban because the Mavs were 2-16 in games officiated by Crawford two seasons ago and Cuban was very vocal about it. The Celtics are 1-1 this season and 3-7 in their last 10 games with Crawford on the court while the Pistons are 3-2 this season and 5-5 in their last 10 with Crawford. His home win/loss record this season is 35-23.

Eric Dalen
Eric Dalen officiated 336 regular season games in his first six NBA seasons. Prior to the NBA, Dalen worked for five seasons in the NBA Development League and officiated the 2008 D-League All Star Game and the Finals. He also officiated for three years in the Southeastern Conference. Dalen was a two-year letter winner at the University of Minnesota where he played tight end for the football team. I couldn't find much on the guy other than an article where Andrew Bynum was complaining about Dalen calling all 6 fouls on him in a game in 2008.

Kirkland earned some measure of notoriety when he jumped in to block a Kris Humphries free throw in a Nets game last season. This season in a game vs the Grizzlies, there were quite a few terrible calls. One of the worst was when the ball hit the rim and the Celtics tipped it in and they called a 24 second violation without checking on the monitors in spite of pleas by every Celtic to do so. There were a lot of head scratching calls and non-calls in that game. In the win over the Pacers this season the free throw differential wasn't bad with 18 for the Celtics and 23 for the Pacers, but there were quite a few head scratching calls prompting "That's terrible!!" from Tommy several times. The Celtics are 4-0 this season and 4-6 in their last 10 games that Kirkland officiated. He can be good or bad depending on the game. The Pistons are 2-3 this season and 3-7 in their last 10 games with Kirkland. His home W/L record this season is 30-25.