The Celtics look to complete their 3 game road trip with a win as they visit the division rival Knicks.

Share All sharing options for: Slumping Celtics look to get back on track as they visit the Knicks

The Celtics complete their 3 game road trip as they visit the division rival New York Knicks. This is the second of 4 games between these two teams. The Celtics won the first meeting on December 27 at the TD Garden. They will play again on February 2 in Madison Square Garden and they will play the final game in Boston on March 4.

Since that time, the Celtics have dropped to 9th in the Eastern Conference, half a game behind the Orlando Magic. The Knicks are 10th in the East and have climbed to within 1 game of the Celtics. The Celtics are on a 3 game losing streak while the Knicks are coming off a win over the Bucks on Sunday.

The Celtics are finally close to having everyone healthy. Avery Bradley returned from a hip injury on Sunday. He aggravated it slightly on Sunday against the Grizzlies but said that he plans to be in the lineup for this game. The Knicks are missing Cleanthony Early who is out with a knee injury. 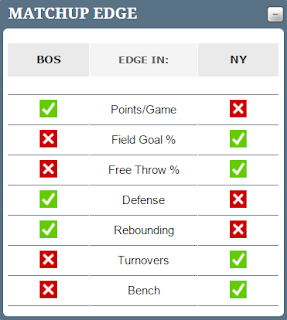 Jae Crowder vs Carmelo Anthony
Carmelo Anthony is the leader of the Knicks and is always a handful to defend. Jae Crowder will be tasked with trying to contain him in this game. In the first meeting between these two teams, Anthony finished with 29 points and 10 rebounds. He is averaging 21.6 points, 7.7 rebounds and 3.7 assists per game this season.

Amir Johnson vs Kristaps Porzingis
The Knicks 7'3" rookie is averaging 13.6 points, 8 rebounds and 2.0 blocks per game and he has long since changed the boos he heard on draft night into cheers. In his first game vs the Celtics he had 16 points and 12 rebounds. His length makes him tough to handle and the Celtics will have their hands full, especially keeping him off the boards and away from the basket.

Honorable Mention
Avery Bradley vs Arron Afflalo
Afflalo is averaging 13.6 points, 3.9 rebounds and 1.8 assists and is capable of putting up big numbers if not defended well.

Keys to the Game
Defense - Playing tough team defense is the key to winning every game. The Celtics need to concentrate on getting stops and keeping the Knicks' offense off balance. The Knicks average just 98.2 points per game but they allow just 99.4 points per game. The Knicks have been locking down on defense in recent games, allowing just 95.2 points over their last 5 games. The Celtics need to play tough defense to limit the Knicks scoring and to match their defensive intensity.

Set the Pace - The Celtics need to run on every possession from start to finish. It seems that when they run they build leads and outplay the other team. When they slow it down, they fall behind and lose leads. They have to run and keep up the pace for the whole game and not just the first half.

Move the Ball - When the Celtics move the ball and find the open man, they play very well. When their assist total is high, they are tough to beat. When they start to play hero ball and stop moving the ball, they usually lose and look terrible while doing it. They need to play as a team with no hero ball.

Smart Offense - The Celtics need to move the ball and find the open man. They have to realize that if the 3's still aren't falling they need to take the ball inside. They can't take quick shots instead of finding the best shot. Play team ball and don't let up.

X-Factors
Focus - The Celtics have lost 3 in a row. They know they need this game and if they come focused on the task at hand and stay focused from the opening tip until the final buzzer, they have a good chance to win this game.

Officiating
The officiating is always an X-Factor. You never know if a crew will call the game tight or let them play and the team has to be able to adjust to any officiating style. And you never know when a ref will have an agenda and call it one sided for one of the teams. We can only hope for an evenly called game where they let them play.

The Celtics have had mixed results with Mott as an official. Like many refs, he can be good or bad depending on the night. It was Rodney Mott that Rondo was joking with and accidentally bumped in a game vs the Hawks. Even though Mott didn't show any reaction at the time and backed up Rondo's story that he was indeed joking with him at the time, Rondo was suspended for the incident. Mott hasn't been particularly good or bad in recent games with the Celtics. The Celtics are 2-0 this season and 3-7 in their last 10 games with Mott. The Knicks are 5-5 in their last 10 with Mott. He is a homer ref with a home W/L record this season of 21-8.

Steve Anderson
Steve Anderson enters his third NBA season having officiated 99 regular season games. He joined the full-time staff in 2013-14 after six seasons as a referee in the NBA D-League and already having officiated 18 regular season NBA games as a non-staff official. Anderson officiated the FIBA U19 World Championships in the Czech Republic in 2013. This season in a game vs the Nets, the officiating was one sided toward the Nets and Brooklyn took 30 free throws to 14 for the Celtics and that was after they tried to even it up down the stretch. He also called a game vs the Pacers last season in which there were quite a few head scratching calls that prompted a "That's terrible!" from Tommy several times.

He called the win over Miami this season and for the most part let both teams play. But, made a few bad calls against the Celtics down the stretch. With just over 2 minute left, they called a foul on Amir Johnson for a foul when Amir and Bosh were both scrambling for a loose ball. Amir was on the floor with the ball and Bosh landed on top of him. It gave Miami possession in a close game. The Celtics are 1-0 this season and 6-4 in their last 10 games with Anderson while the Knicks are 2-6 over Anderson's career. His home W/L record is 16-8.

David Jones
David Jones has officiated 1,556 regular season games and 71 playoff games throughout his 26 seasons as an NBA official. In addition, Jones officiated both the men’s and women’s 2000 Olympic Bronze Medal Games. Jones has eight years of collegiate officiating experience in the Southeastern, Trans-American Athletic, Metro and Sunshine State Conferences.

In the past, he has been pretty good in calling games. Last season against the Magic, he was terrible. He called a flagrant 2 on Smart, which was later downgraded and then he called an even worst flagrant 1 on Isaiah Thomas. The officiating was one sided throughout the game with Orlando shooting 30 free throws to 16 for the Celtics. He also called that atrocious game against the Bucks with Lauren Holtcamp where several times Tommy was exasperated and just called for the refs to go home because they were missing everything. It really was bad.