The slumping Celtics return home from their 3 game road trip to face the tough Indiana Pacers.

Share All sharing options for: Celtics looking to snap 4 game losing streak as they host the Pacers

The Celtics return home from their 3 game road trip to face the Indiana Pacers. This is the 3rd of 4 games between these two teams this season. The Celtics lost the first two games in the series, one in Indiana and one in Boston. They will meet one more time in Indiana on March 15.

The Celtics have everyone mostly healthy with the exception of some bumps and bruises. Avery Bradley still has some soreness in his hip from the injury that kept him out for two games last week. He returned on Sunday against Memphis but aggravated the injury in that game. He played on Tuesday against the Knicks but still isn't 100% healthy. Rodney Stucky is questionable for this game after leaving Tuesday's game against the Suns with a right foot injury.

The Celtics are coming off a tough loss to the Knicks and have lost 4 in a row and 6 of their last 7. The Pacers are coming off a big win over the Suns at home and are looking for their second straight win. The Pacers are in the 5th spot in the East and playing some of their best basketball of the season. The loss to the Knicks moved the Celtics down to 10th, a game behind the Magic, who are in 8th. 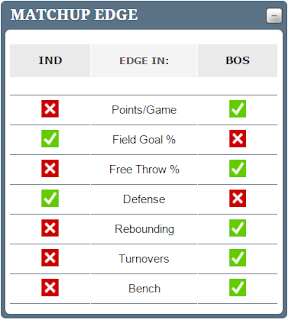 Jae Crowder vs Paul George
George is the star of this Pacers team and is playing the best basketball of his career this season. He is averaging 24.3 points, 7.6 rebounds, 3.9 assists and 1.8 steals per game. The Pacers move him to power forward in small ball lineups and that causes mismatches for many teams. Jae will get the task of trying to keep him from having a big game at either the 3 or the 4. George led the Pacers in both of the games between these two teams with 26 points and 10 rebounds per game.

Isaiah Thomas vs George Hill
Hill has a height advantage over Isaiah Thomas, but then again, who doesn't? Hill is averaging 12.4 points, 4.0 rebounds, 3.1 assists, and 1.5 steals per game. He is shooting 42.3% from beyond the arc. Isaiah will need to out-quick him in order to get the better of this matchup. Then again, it might be time for Marcus Smart to reclaim his starting spot.

Honorable Mention
Avery Bradley vs Monta Ellis
Ellis is averaging 13.3 points, 2.9 rebounds, 3.8 assists and 1.8 steals per game. He is capable of putting up big numbers in any game if not defended well.

Keys to the Game
Focus on Offense - The Celtics biggest problem in their losses has been the inability of anyone to hit their shots on a regular basis. The Celtics finally seemed to get their offense on track in the first half vs the Grizzlies and then reverted back to missing everything in the second half. They shot much better against the Knicks but have to do that consistently. They need to keep their focus, move the ball, and find the open man on offense with everyone making their shots. If the 3 pointers aren't falling yet again, they need to take the ball inside to get easier shots.

Rebound - Especially if either team is struggling to make shots, the Celtics must crash the boards. They can't score without the ball and it will take extra effort on their part to grab the rebounds. However, in their first 2 meetings, the Pacers out-rebounded the Celtics. The Celtics have to crash the boards and should not allow that to happen again if they want to get a win.

Be Aggressive - The Celtics must be aggressive on defense, in going after loose balls, crashing the boards, and just going all out on every play. They have to aggressively attack the basket. It will be most important to start the game with that aggressive attitude and then be aggressive through the whole game with no let up. The more aggressive team will usually get the benefit of the doubt from the refs as well.

Play Defense - Defense wins games. The Celtics have to guard the perimeter as well as in the paint because the Pacers have players who can be dangerous from both the perimeter and inside. Indiana is holding opponents to 98 points and have consistently played tough defense. The Celtics allowed the Knicks to shoot 53% from the floor and 35% from beyond the arc. The Celtics must do better on the defensive end.

Play Team Ball - In the last two losses, Isaiah Thomas has had 30+ points but hasn't been particularly efficient. He took 23 shots vs the Knicks, twice as many as any other Celtic. The Celtics play best when they are moving the ball and finding the open man and all contributing. Their best wins have come when no Celtic scores more than 25 points and they spread the scoring around. Standing and watching Isaiah look for a shot and then passing when he doesn't have one just isn't working. They have to get back to playing team ball.

Revenge Factor - The Celtics have lost to this team twice this season already. Can they use the home court to their advantage along with the desire to get back on track and to avenge their earlier losses?

Official Report
Tony Brothers
Tony Brothers is entering his 22nd season as an NBA official and has officiated 1,270 regular season games, 84 Playoff games and five NBA Finals games during his career. He was a member of the crew that officiated the 1996 Mexico Challenge, 1998 Schick Rookie Game, 1999 McDonald’s Championship in Milan, Italy and the 2008 China Games.Prior to joining the NBA, Brothers spent four years officiating in the CBA, including three CBA Finals and a CBA All-Star Game. He has one year of collegiate officiating experience at the Junior College level. Brothers also has seven years of high school officiating experience in Virginia, including three state tournaments.

Two seasons ago, in a game vs the Knicks, twice Brothers made the correct call from across the court after Dick Bavetta, who was standing right on top of it, missed the call. All in all, Brothers is one of the better refs in the league. But, inexplicably in a game last season against the Lakers, he was terrible. He was the referee who ejected Isaiah Thomas on a bogus technical call, which has since been rescinded. He also missed a clear travel and double dribble by Lin right in front of him at a very crucial time. There were bad calls and bogus calls all game. The Lakers shot 38 free throws to 27 for the Celtics. Even the Lakers fans were complaining about the officiating going their way all game. Here is a comment from the Lakers boards that says it all, "The Refs are screwing our tank."

Dallas shot 35 free throws to 24 for Boston, even after several intentional fouls by Boston at the end. Brother was also the crew chief in the game against the Timberwolves. In that game calls went the Celtics way at first. After 2 technical fouls against Minnesota's bench things reversed and calls went mostly the Wolves way. Again, the Timberwolves fans said it best:

When fans admit they are getting help from the refs, you know that the officiating is bad. Minnesota shot 32 free throws to just 16 for the Celtics. Other than those games he has been a decent ref so who knows what we will get in this game. Brothers calls 42.8 fouls per game with 47.1% of those fouls called on the home team. The Celtics are 1-2 this season and 3-7 in their last 10 with Brothers. The Pacers are 1-0 this season and 5-5 in their last 10. His home W/L record this season is 15-11.

Wall was the ref that called the clothesline on Barbosa by Bogans in the Nets game 3 seasons ago just a regular foul. Wall also officiated the Cavs game last season where they called it evenly through 3 quarters and then they gave the game to the Cavs in the 4th quarter. Wall also officiated a Warriors game last season where all the calls down the stretch went the Warriors way and even Warriors fans were surprised at all the calls going their way. The Celtics are o-1 this season and 3-7 in their last 10 games with Wall while the Pacers are 2-0 this season and 3-7 in their last 10. His home W/L record is 13-11.

Leon Wood
Leon Wood’s connection with the NBA began as a player when he played professionally with Philadelphia, Washington, New Jersey, San Antonio, Atlanta and Sacramento, averaging 6.4 points, 3.2 assists and 1.2 rebounds as a guard during his six-year NBA career. In addition to his NBA playing career, Wood was a member of the Gold Medal winning 1984 United States Olympic Basketball Team, and he won another Gold Medal in the 1983 Pan-Am Games. During his 19-season NBA officiating career, he has worked 1,113 regular season games and 20 playoff games. Wood has three years of CBA officiating experience and one year of collegiate officiating experience in the Ohio Valley and Trans America Athletic Conferences. He also has one year of high school officiating experience in California.

You would think that being a former player, Wood would try to be fair but he has been a fairly mediocre ref at best. Although he's been pretty good for the most part in Celtics games he has officiated, one terrible one last season stands out. Against the Magic, the Celtics were mugged all night with no calls. The Magic got the benefit of ticky tack calls. The game ended with 28 free throws for the Magic and 20 for the Celtics, but 6 of those free throws were the result of intentional fouls by the Magic down the stretch. The Celtics are 6-4 over their last 10 games with Wood officiating. This is his first game with the Celtics this season. The Pacers are 1-0 this season and 5-5 in their last 10 games with Wood. His home W/L record this season is 15-7.