Celtics look to win second straight as they host the Suns

The Celtics look to begin a win streak at home before heading out on the road for another 3 game road trip.

Share All sharing options for: Celtics look to win second straight as they host the Suns Celtics will play their second game at home before heading out on the road for another 3 game road trip. The Celtics host the injury riddled Suns for just the second time since the trade that brought Isaiah Thomas to Boston. They split the season series 1-1 last season with each winning on the others' court.

Three days after the trade last season that brought Isaiah to Boston, the Celtics played the Suns in Phoenix and Isaiah led the them to a 115-110 victory with 21 points and 7 assists. Eight of his points came in the final minute and 37 seconds. The Celtics are playing in the first of back to back games and will play in Washington on Saturday night.

Now that Isaiah is a starter for the Celtics and he has had a year to ingratiate himself to his new team, he will be looking to get a win against the team that he feels disrespected him and then traded him. He had been vocal about being the 3rd or 4th guard on a guard heavy team and that more than likely led to the trade. He has said that there is no bad feelings about the trade, but you know he has to feel justified now that he is playing so well in Boston. Hopefully he stays within the game and plays team ball rather than playing hero ball and trying to do too much as he looks to prove that his former team made a mistake to trade him.

The Celtics snapped a 4 game losing streak with a win over the Indiana Pacers on Wednesday. The Suns also played their last game against the Pacers, losing 116-97. The Suns have lost their only 3 road games this month by an average of 20.6 points to Sacramento, LA Lakers and Indiana. The Suns are just 1-9 in their last 10 games and have lost 12 of their last 13.

The Celtics are finally healthy for the most part with just a few minor bumps and bruises. Marcus Smart is still working his way back from injury as is Avery Bradley but both will play. The Suns are struggling with injuries to Eric Bledsoe, Alex Len, and Ronnie Price, who are all out. Brandon Knight missed the game vs the Pacers with food poisoning but is expected to play in this game. 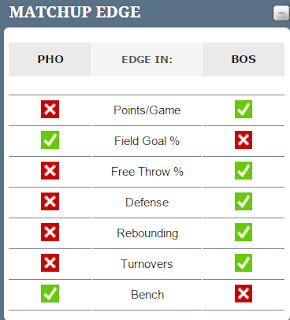 Isaiah Thomas vs Brandon Knight
Knight is averaging 19.7 points, 5.3 assists and 1.3 steals. He is coming off a case of food poisoning but should be fine for this game. Isaiah is on a tear, averaging 32.3 points in his last 3 games and will be motivated to beat his former team.

Jared Sullinger vs Tyson Chandler
Chandler is averaging just 5.3 points, 7.1 rebounds, and 0.6 blocks per game. He is capable of having a big game if the Celtics don't keep him out of the paint.


Keys to the Game
Play 48 Minutes - The Celtics need to keep their focus and intensity for 48 minutes. Against some teams they have gotten off to a fast start only to collapse at the end. Some games they have fallen behind and then mount a comeback in the second half only to fall short. They have to play hard and stay focused from the opening tip to the final buzzer.

Run, Run, Run! - The Suns are short handed and the Celtics can use their depth to keep the Suns running and tire them out by the end of the game. The Celtics play best when they run and set the pace. When they start to walk the ball up and not run back on defense, they struggle.

Defense - Defense is always a key to winning. The Celtics amped up their defense against the Pacers and it led to a win. They need to continue to make defense a priority if they want to continue to win. You can't win without defense.

Be Aggressive - The Celtics have to be the more aggressive team in going after loose balls and rebounds, in defending, in going to the basket. They tend to back off and be less aggressive when they face teams that are missing players or teams they expect to beat easily and they end up losing. They can't let the fact that Phoenix is short handed keep them from being aggressive.

X-Factors
Isaiah Factor - Although Isaiah said there were no bad feelings after the trade, every player wants to get a win over their former team. Hopefully he won't try too hard and lapse into hero ball. He needs to play within the team concept and not worry about showing the Suns what they are missing.

Depleted Team Factor - Too often when the Celtics face a weaker team or a team that is missing key players they come out flat and fail to play with energy. We have seen this against the Lakers, and the Nets and other teams that were less than full strength. They have to play just as hard against the Suns as they would the Warriors.


Forte was one of the refs that officiated a Celtics win in Indiana 2 seasons ago. The officiating in that game was horrible and very one sided toward the Pacers. One of the comments from the Pacers' forum said that they wouldn't blame Celtics fans if they punched out the refs. It's bad when the officiating is so terrible that the opposing fans feel bad about it. Tommy also had this to say, "I hope this group of officials doesn't officiate the playoffs. Holy cow! They are terrible." He's been good in more recent games, however. He called the wins vs Houston and Washington this season and the officiating in both was good. They let them play and didn't interfere with the flow of the game. The Celtics are 3-0 this season and 8-2 in their last 10 games with Forte officiating. The Suns are 2-3 this season and 4-6 in their last 10 with Forte. His home W/L record this season is 17-13.

Gediminas Petraitis
Gediminas Petraitis is entering his first season as a full-time NBA official. Prior to joining the NBA, Gediminas officiated three years in the NBA Development League, working 2015 NBA D-League Finals, as well as working 12 regular season NBA games as a non-staff official. Additionally, Petraitis officiated three years of Division 1 basketball, mainly working in the Big South Conference, while also being a member of AAC officiating staff. Petraitis also officiated in various Division 2, 3 and Junior College leagues. Gediminas began his refereeing career at the high school level in Maryland, where he is a member of IAABO Board 12. He also serves as a FIBA Basketball Referee.

Petraitis called the first game between the Spurs and the Celtics in Boston along with lead official, Danny Crawford. In that game, they allowed the Spurs to get away with a lot of contact: pushing, grabbing, hacking etc. At the half, The Spurs had shot 14 free throws to 3 for the Celtics. Boston had 52 points in the paint compared to 38 for the Spurs and the Celtics were being aggressive in going to the basket. In spite of that, the Spurs finished with 25 free throws to 14 for the Celtics. They let a lot go on both sides overall, but did favor the Spurs. He called the 2nd game vs the Spurs as well along with crew chief Tom Washington. They favored the Spurs a bit in the first half, but called it more evenly in the second. They pretty much let both sides play. Both teams shot 22 free throws.

The Celtics are 1-2 over Petraitis' career and the Suns are 1-1 this season and 3-1 over his career. Sometimes new referees will be intimidated by the home crowd and sometimes they go the opposite way just to prove they aren't intimidated. With his home W/L record of 10-14, it seems more like the latter.

There hasn't been a lot of controversy with James Williams as a referee. None of his games stand out as terribly bad as with some refs. Williams called the game against Miami earlier this season and for the most part they let them play. However, he made a head scratching call against the Celtics. With just over a minute left, he called a foul on Amir Johnson, when Johnson and Bosh were both scrambling for the ball and Bosh landed on Amir. That gave Miami possession in a close game. Other than that, he's been decent in the games he has called for the Celtics. The Celtics are 1-1 this season and 6-4 in their last 10 games with Williams while the Suns are 0-1 this season and 6-4 in their last 10. His home W/L record this season is 14-16.