Celtics back (to back) on the road to take on Wizards

Share All sharing options for: Celtics back (to back) on the road to take on Wizards

After two games at home, the Celtics begin another 3 game road trip with a visit to the Washington Wizards. This is the 3rd of 4 games between these two teams this season. The Celtics won the first two game in Boston 115-98 and 111-78. They will play one more time on 1/25 in DC.

The Celtics have dropped three straight on the road while the Wizards have lost three of four at the Verizon Center. This game is important as far as Eastern Conference standings are concerned. With a win, the Celtics can assure themselves of winning the tie breaker between these two teams should that factor in at the end. Also, The Celtics have moved back into the 8th spot just 1/2 game behind the Pistons in 7th and just 1/2 game ahead of the Magic in 9th. They are also just 1 game ahead of the Wizards, who are in the 10th spot.

The Wizards are dealing with several injuries to key players.Alan Anderson is out with an ankle injury. Marcin Gortat (knee), Kris Humphries (knee), and Otto Porter (hip) are all day to day. Bradley Beal missed 16 games with a stress reaction in his leg and returned in Friday's game vs the Pacers. His 22 points in 22 minutes off the bench showed no rust. He may return to the starting lineup or may come off the bench again. The Celtics report no one out with an injury. 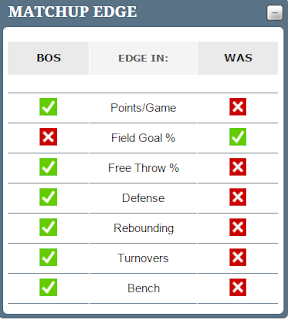 Isaiah Thomas vs John Wall Wall is averaging 19.6 points, 4.1 rebounds and 9.6 assists. The Celtics need Isaiah's offense, but he is going to struggle to keep Wall from having a big game. Expect to see Bradley or Smart on Wall if he starts to have a big game.

Avery Bradley vs Bradley Beal Bradley Beal has missed 16 games with a stress reaction in his leg. He returned on Friday night to score 2 points off the bench in 22 minutes. Beal is averaging 19.3 points, 4.6 rebounds, 1.1 steals and 3.2 assists. Beal may come off the bench again or he may return to the starting lineup but the matchup will be Bradley vs Beal, even if Garrett Temple starts.

Honorable Mention
Amir Johnson vs Jared Dudley Kris Humphries has been out with a knee injury. It's possible that he may return for this game and would start at power forward. Dudley led the Wizards with 19 points in their last meeting with the Celtics. Amir has been playing great in recent games and so this should be an interesting matchup for both sides.

Keys to the Game
Play Strong for 48 Minutes - In some games the Celtics start strong but then struggle to make shots and turn the ball over allowing the other team to get a lead. In other games they struggle out of the gate and then spend the rest of the game trying to catch up. They need to give a consistent effort for the entire game.

Defense - The Celtics need to continue to make defense a priority. Defense wins games. They especially need to contain the Wizards' talented back court. They beat the Pacers with their tough defense down the stretch and the defense led to offense. They need to keep that up.

Play as a Team - The Celtics need to play team ball. They have to move the ball and find the open man with the best shot. When they lapse into hero ball where each player tries to make the home run play, they usually struggle. They play the best when they are moving the ball and racking up assists and playing team defense.

X-Factors
Back to Back - The Celtics have made it a point of pride to play their best on the second night of back to back games. Hopefully they continue that in this game. The Wizards are also playing in the second of back to back games and haven't been quite as successful in those situations. The Wizards have also been playing short handed and that could also figure into it as could the fact that they are playing at home while the Celtics had to travel between games.

Officiating - Officiating will be an X-Factor for every game. Every crew has their own way of calling the games and they have their own agendas. Will they call it fairly or in favor of one team or the other? Will they let them play or call every little contact? The way the game is called always has an effect on the way it is played.

Tony Brothers is entering his 22nd season as an NBA official and has officiated 1,270 regular season games, 84 Playoff games and five NBA Finals games during his career. He was a member of the crew that officiated the 1996 Mexico Challenge, 1998 Schick Rookie Game, 1999 McDonald’s Championship in Milan, Italy and the 2008 China Games.Prior to joining the NBA, Brothers spent four years officiating in the CBA, including three CBA Finals and a CBA All-Star Game. He has one year of collegiate officiating experience at the Junior College level. Brothers also has seven years of high school officiating experience in Virginia, including three state tournaments.

Two seasons ago, in a game vs the Knicks, twice Brothers made the correct call from across the court after Dick Bavetta, who was standing right on top of it, missed the call. All in all, Brothers is one of the better refs in the league. But, inexplicably in a game last season against the Lakers, he was terrible. He was the referee who ejected Isaiah Thomas on a bogus technical call, which has since been rescinded. He also missed a clear travel and double dribble by Lin right in front of him at a very crucial time. There were bad calls and bogus calls all game. The Lakers shot 38 free throws to 27 for the Celtics. Even the Lakers fans were complaining about the officiating going their way all game. Here is a comment from the Lakers boards that says it all, "The Refs are screwing our tank."

Dallas shot 35 free throws to 24 for Boston, even after several intentional fouls by Boston at the end. Brother was also the crew chief in the game against the Timberwolves. In that game calls went the Celtics way at first. After 2 technical fouls against Minnesota's bench things reversed and calls went mostly the Wolves way. Again, the Timberwolves fans said it best:

When fans admit they are getting help from the refs, you know that the officiating is bad. Minnesota shot 32 free throws to just 16 for the Celtics. Other than those games he has been a decent ref so who knows what we will get in this game. It's odd that Brothers just called the Pacers game this past week and is now calling another game for the Celtics. In the Pacers game, they mostly let both sides play but missed a couple of big calls that even the ESPN announcers mentioned. One was an out of bounds play and the other was an offensive foul against Amir that was not called. Other than a few glaring calls, they weren't all that bad. It's funny that before the game, both fan bases were bemoaning the fact that Brothers was one of the refs. Brothers calls 42.8 fouls per game with 52.9% of those fouls called on the home team. The Celtics are 2-2 this season and 4-6 in their last 10 with Brothers. The Wizards are 0-2 this season and 5-5 in their last 10. His home W/L record this season is 16-12.

Ford is entering his first season as an NBA referee. Prior to joining the NBA Ford spent five seasons (2009-2015) in the NBA D-League where he officiated 11 playoff games from 2010-2015 including the 2015 NBA D-League Finals and the 2014 NBA D-League All-Star game. Ford also spent four seasons (2011-2015) officiating in the WNBA. He also officiated Division 1 basketball for three season in the Big 10 Conference, Mid-American Conference, & Summit League. In addition, he acted as the Assistant Director of Intramural Sports at Purdue University for six years (2009-2015). Ford holds both a Bachelors & Masters from Ball State University in Sport Administration.

Tiven lives in Connecticut and he has a twin brother who is a big Celtics fan and who has been shown in the crowd at the Garden when Tiven was officiating. Tiven also has little controversy in his time in the league and has been fairly good in the games he has called for the Celtics. In the game this season vs the Spurs, however, the officiating was one sided toward the Spurs with the Spurs allowed a lot of contact and the Celtics called for any contact. In spite of the Celtics being aggressive with 52 points in the paint to 38 for the Spurs, the Celtics shot just 14 free throws to 15 for the Spurs. At the half the free throws were 14-3 in favor of the Spurs. The Celtics are 2-1 this season and 8-2 over their last 10 games with Tiven. The Wizards are 0-2 this season and 4-6 in their last 10 games with Tiven. He is a homer ref with a home W/L record this season of 23-7.