Celtics and Sixers both look for a second straight win as the Celtics travel to take on the Sixsers.

Share All sharing options for: Celtics brave the snow to pay a visit to the division rival 76ers


The Celtics travel to Philadelphia to face the last place 76ers. This game was originally scheduled for Saturday night but was postponed until Sunday because of the inclement weather from Winter Storm Jonas. The Celtics were on standby to travel and expected to travel to Philly on Sunday morning before the game.

This is the third of 4 games this season. The Celtics won both of the previous games this season, both of which were in Boston. They will meet one more time on 3/20 in Philadelphia to complete the season series. While this may look like an easy win, you never can depend on that with these Celtics. In the second game in Boston, the Sixers were up by 7 with just 4 minutes to play and the Celtics somehow held the Sixers scoreless for the last 3 minutes to get an 84-80 win.

The Sixers are coming off a 96-87 win over the Orlando Magic and given that they took the Celtics down to the wire in their last meeting, they will have their confidence about as high as it could be for a 6 win team. They have been playing much better since bringing in Ish Smith to man the point. The Sixers are 3-16 at home while the Celtics are 11-11 on the road.

Joel Embiid, who has yet to play for the Sixers, will be out once again. Nik Stauskas practiced on Saturday but struggled and is not expected to play in this game. Nerlens Noel (migraine) and JaKarr Sampson (hip) left Wednesday's game vs the Magic but are expected to be ready to play in this game. Jae Crowder played in Friday's win over the Bulls in spite of suffering with flu like symptoms. He missed Saturday's practice but will travel with the team and is expected to play.

Evan Turner is returning to Philly to play the team that drafted him second overall in the 2010 draft. He played for the Sixers from 2010 to 2014 and was much maligned there for never living up to the expectations they had for a number 2 pick. 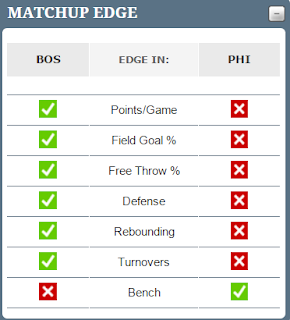 Amir Johnson vs Nerlens Noel and Jared Sullinger vs Jahlil Okafor
The Sixers strength is in their young center and power forward. Noel led all rookies in rebounding (8.1), steals (1.77) and blocks (1.89) last season. The only other rookie to average more than 1.5 blocks and 1.5 steals was David Robinson. He is averaging 10.4 points, 8.3 rebounds, 1.6 steals and 1.6 blocks per game. He could be a tough matchup for the Celtics. Jahlil Okafor was the 3rd pick in this year's draft and is athletic and talented and will also test the Celtics interior defense. Okafor is averaging 17.6 points, 7.4 rebounds, and 1.1 blocks per game.

Honorable Mention
Isaiah Thomas vs Ish Smith
The Sixers have been playing much better since signing Ish Smith to play point guard. Smith is listed at 6'0" and, like Thomas, is a spark plug on the court. Smith is averaging 11.4 points, 3.4 rebounds, 6.6 assists, and 1.1 steals per game. He is coming off a 13 point, 11 assist game in the win over Orlando on Wednesday.

Keys to the Game
Defense - The Celtic have struggled with their defense recently but played good defense, especially down the stretch in their win over the Bulls. They have been especially good in forcing turnovers and need to bring a tough defensive mindset to this game. Defense wins games.

Move the Ball - The Celtics have shown beautiful ball movement at times and they have been able to make the extra pass and find the open man to get the best shot. But at times, their assist levels have dropped and they play more one on one and take quick shots. Hero ball rarely wins games. The Celtics need to continue playing as a team and keep the ball moving.

Run- The Celtics need to use their depth to run on every possession. They can get easy baskets if they beat their opponents up the floor. They can also set their defense if they can beat opponents back on the other end.

Focus - The Celtics need to make their shots. It is a mystery how a team can shoot 58% in one game and then be unable to hit a shot in the next game. The past few games, their offense has been pretty much on track and they need to continue to hit their shots. They also need to keep their focus and not play down to the Sixers. They lost to the Lakers and Nets, two teams they should have beaten, because they didn't stay focused.

X-Factors
Extenuating Circumstances - This game was supposed to be played on Saturday but was postponed until Sunday. The Celtics practiced on Saturday but then were on standby, not knowing when or if they would be cleared to travel. They will probably be traveling the morning of the game and that is sure to throw them off a bit.

Forte was one of the refs that officiated a Celtics win in Indiana 2 seasons ago. The officiating in that game was horrible and very one sided toward the Pacers. One of the comments from the Pacers' forum said that they wouldn't blame Celtics fans if they punched out the refs. It's bad when the officiating is so terrible that the opposing fans feel bad about it. Tommy also had this to say, "I hope this group of officials doesn't officiate the playoffs. Holy cow! They are terrible." He's been good in more recent games, however. He called the wins vs Houston and Washington this season and the officiating in both was good. They let them play and didn't interfere with the flow of the game. The Celtics are 4-0 this season and 9-1 in their last 10 games with Forte officiating. The Sixers are 0-4 this season and 2-8 in their last 10 with Forte. His home W/L record this season is 21-13.

Matt Boland
Entering his 14th season as an NBA official, Matt Boland has worked 653 regular season games. Prior to joining the NBA, he spent seven years officiating in the CBA, including the 1999, 2000 and 2001 CBA Finals. He also
officiated for five years in the WNBA and worked the 2002 and 2003 WNBA Finals, as well as two years in the NBA D-League, working the 2003 Finals. Boland also has five years of USBL officiating experience, including the 1997 USBL Finals. Boland officiated at the collegiate level for four years, working in the MAAC, Ivy, Northeast, TAAC and OVC Conferences. He also has high school officiating experience in his home state of Connecticut and worked two State Finals games in 1997 and 1998.

Boland, along with Scott Foster, was questioned by the FBI in regard to the Tim Donaghy case after it was found that Donaghy often phoned Boland on game days. The FBI cleared both Boland and Foster of involvement in that betting scandal, but that doesn't mean much. In a game last season vs the Bulls, the officiating was totally one sided with the Celtics taking 11 free throws to 40 for the Bulls. Tommy said this about it: "This was an abomination. It wasn't even close to a decently officiated game." The Celtics are 1-0 this season and 5-5 over their last 10 games with Boland while The Sixers are 0-3 this season and 0-10 in their last 10. Boland's home W/L record this season is 15-15.

Scott has been mostly good in the games he has called for the Celtics. However, in the game this season vs the Wolves, calls went the Celtics way at first but after two T's on Minnesota's bench, they all went the Wolves way. The Timberwolves fans said it best: