Celtics look for their 4th straight win as they return home to host the Denver Nuggets.

Share All sharing options for: Celtics look for 4th straight win as they host the Denver Nuggets

The Celtics come home from a rather odd back to back 2 game road trip to host the Denver Nuggets for the first of 2 games this season. The Celtics overcame snow delays and day of game travel to win both games on the road. They are looking for their 4th straight win as they take on the Nuggets. The Nuggets closed out a 4-4 home stand with a loss and will be on the road for 8 of their last 10 games.

The Celtics remain pretty much healthy with just a few bumps and bruises here and there. Jordan Mickey is out with a sprained ankle, but he would be more likely to head back to Maine than to play with the Celtics. Gary Harris was limping in Monday's game vs the Hawks and is considered day to day. Jameer Nelson has missed 5 games with a sprained wrist and is questionable for this game. Kenneth Faried is probable with a sore adductor muscle and Wilson Chandler is out with a hip injury. 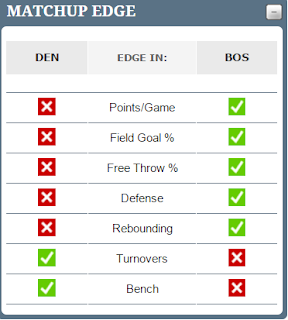 Jae Crowder vs Danilo Gallinari
This may be a tough matchup for both teams. Gallinari has a height advantage and needs to be covered all over the court because he has good range on his shot. On the other hand, Jae has a strength advantage and should be able to out muscle him in the paint. Gallinari is averaging 19.2 points, 5.7 rebounds, and 2.5 assists.

Amir Johnson vs Kenneth Faried
Faried has a motor that doesn't quit. He reminds me of Jae Crowder in some ways (and not just the hair). Faried is averaging 12.2 points, 8.8 rebounds and 1.1 assists. Amir will need to keep him out of the paint and off the boards.

Honorable Mention
Isaiah Thomas vs Emmanual Mudiay
Isaiah is making a strong bid to be included in the All Star game. Over the last 10 games, he is averaging 25.4 points and 6.4 assists. The Nuggets rookie is averaging 11.0 points, 3.3 rebounds, and 5.7 assists per game. He has a height advantage over Isaiah (but then who doesn't?) but Isaiah has a way of neutralizing height advantages with his speed and wily moves. We may also see Avery Bradley and Marcus Smart on him should he be able to figure out the enigma that is Isaiah Thomas. Mudiay averages 3.7 turnovers per game and a bit of pressure on him by the Celtics defensive back court could increase that even more.

Keys to the Game
Defense - Defense is the key to winning every game. The Nuggets are averaging just 99.7 points per game and are allowing 103.8 points. But the Celtics can't let up on defense because if they do, the Nuggets have players who are capable of getting to the basket and scoring points.

Run! - The Celtics are a much better team when they push the ball and run and get easy shots before the defense can set up. When they slow it down, they get stagnant on both ends of the court and struggle to score and get stops. They need to run on every offensive possession and then run back on defense.

Play 48 Minutes - The Celtics have to come out strong and play hard for the entire game. They have to avoid the lapses in the middle where they turn the ball over and miss their shots. They have to focus and keep playing hard from the opening tip until the final buzzer, especially if they get a lead. They tend to let up at times when they get a lead and let the other team come back. The need to work hard to keep that from happening.

Be Aggressive - The Celtics must be the more aggressive team. They have to fight for loose balls, defend aggressively, be aggressive in driving to the basket, and just play harder than the Nuggets for the entire game. They have to be the team that wants it more. They did a good job of being aggressive against their last 3 opponents and they need to keep it up.

Rebound - The Celtics can't score if they don't have the ball. Much of rebounding is effort and when the Celtics put extra effort into grabbing rebounds, that effort often translates to the rest of their game. They have to crash the boards to give themselves second chance points and to prevent the Nuggets from getting the same.

Move the Ball - The Celtics have to move the ball and find the open man and the best shots. When they lapse into hero ball, they struggle to score. They are at their best when they are assisting on the majority of baskets and keeping the ball moving.

X-Factors
Back at Home - The Celtics have played very tough on the road, especially on this 2 game road trip. They are back at home and need to bring the same mindset to this game and not let down because they are at home. They need to feed off the home crowd and defend their home court with ferocity.

Officiating - Officiating will be an X-Factor for every game. Every crew has their own way of calling the games and they have their own agendas. Will they call it fairly or in favor of one team or the other? Will they let them play or call every little contact? The way the game is called always has an effect on the players.

Official Report
Monty McCutchen
Monty McCutchen has officiated 1,310 regular season, 124 playoff, and 12 Finals games. He worked the 2007 NBA All-Star Game in Las Vegas and was a member of the crews that officiated the 1996 and 1997 Mexico Challenges, as well as the 1998 Schick Rookie Game. Prior to joining the NBA, McCutchen spent four seasons in the CBA, where he worked the All
Star game his second year and the playoffs all four years. He also officiated the CBA Finals the last three years he was with the league. McCutchen missed the 1998-99 season with a ruptured Achilles tendon.

He is a former elementary and middle school teacher and is fondly remembered by his students as a really nice guy. In searching for information on him, I found a Cavs' blog that blamed a loss to the Celtics on the officiating of Monty McCutchen. That was the game where Mike Brown was ejected and the Cavs made a furious comeback but fell short. In game 2 of the WCF, McCutchen flipped out on someone and yelled "I'm running this game not you!" as Serge Ibaka went to the line for free throws.

Most of his games with the Celtics have been well officiated but there have been a few head scratching calls as well. He was the lead ref in one of the worst officiated games I've watched in a long time. In the LA Lakers vs Golden State Warriors a couple years back, the Lakers shot 50 free throws to 16 for the Warriors in a 2 point LA win. It was a key game for the Lakers playoff hopes and the referees literally gave them the game.

One play in particular stands out to me. In the final minutes with the game tied, Stephen Curry was called for an offensive foul on Dwight Howard, when it was clearly a foul on Howard. The worst part is that they put Steve Blake, a very good free throw shooter, on the line instead of Dwight, even though Blake wasn't involved in the play. It truly was a travesty and the announcers at the time were completely disgusted with it. It just proves that when they have an agenda, they will go to extreme lengths to accomplish it.

Maybe he felt like he owed the Warriors one because he called the Celtics game against the Warriors this season and it was definitely called in favor of the Warriors. They gave the Warriors break after break and had Tommy sputtering and yelling the entire game. Evan Turner said after the game that the officiating was a big reason the Celtics lost. Even Warriors fans were talking about all the calls going their way. When Draymond Green committed his 6th foul, they gave it to Stephen Curry, who wasn't even involved in the play. Green was able to play the 4th quarter and both OT's with 5 fouls. Avery Bradley, who was having considerable success guarding Curry fouled out on a couple of questionable calls. The Warriors shot 39 free throws to just 16 for the Celtics.

So, I guess the bottom line is that McCutchen can be very good, but he also can be very bad. The Celtics are 1-2 this season and 4-6 in their last 10 games with McCutchen on the court. The Nuggets are 3-7 in their last 10 games with McCutchen. This is his first game with the Nuggets this season. He calls an average of 40.6 fouls per game with 49% called on the home team. He is a homer ref with a home W/L record this season of 25-8.

Derrick Collins
Derrick Collins has officiated 871 regular season games and 16 Playoff games in 14 NBA seasons. Prior to joining the NBA, he officiated five seasons in the CBA where he worked two Finals, and three seasons in the WNBA, working three WNBA Playoffs and Finals. He has seven years of collegiate officiating experience in various conferences (Big 12, Sun Belt, Conference USA, Southland, SEC, TAAC, OVC and SWAC), and he officiated a Southland Conference semifinal game. Collins also officiated at the high school level in Louisiana.

There is very little controversy around Collins. In the Wolves game last season, most of the calls went their way and the Wolves shot 32 free throws to just 9 for the Celtics but Collins has been decent for the most part. In the Spurs game this season, the refs favored the Spurs a bit in the first half but were fairly even in the second half. They pretty much let both teams play for most of the game. Free throws were even at 22 for the game. Collins calls 41.8 fouls per game with 48.8% on the home team. The Celtics are 0-2 this season and 3-7 in their last 10 games with Collins while the Nuggets are 1-1 this season and 3-7 in their last 10. His home W/L record this season is 18-15.

In a game last season against the Magic the officiating was terrible. The Celtics were mugged all night with no calls while they were called for ticky tack contact with the Magic. Orlando shot 28 free throws to 20 for the Celtics, but 6 of the Celtics' free throws were intentional fouls at the end of the game. Otherwise he wasn't bad last season.

In his first game with the Celtics this season, the loss to Dallas, the officiating was terrible. After they called 2 clean blocks by the Celtics fouls, Tommy yelled, "That's 2 strikes against them." Then after failing to call a Parsons elbow to Smart's head right in front of Taylor, Tommy yelled "This is getting obnoxious." They were so bad they even got an "Oh, come on!" from Mike who rarely complains. Dallas shot 35 free throws to 24 for Boston. Here are just a couple comments from many from Mavs fans: