The Celtics complete the home and home series with the Magic as they go for their 6th straight win.

Share All sharing options for: Celtics look for their 6th straight win as they visit the Magic

The Celtics and the Magic complete the home and home set with a game in Orlando. The series sits at 1-1 with each team winning on their home court. The Magic won 110-91 on November 29 while the Celtics won 113-94 two days ago. They will meet one more time on March 21.

The Celtics remain in the 5th spot in the East, tied with Atlanta who are in the 4th spot. They are 1/2 game behind the Bulls, who are in 3rd. They are also 1/2 game ahead of Miami who are 6th. Orlando is in the 12th spot 3.5 games out of the playoffs. The Magic will always have a place in Celtics history. They beat the Celtics 95-92 in the last game played in Boston Garden on May 5, 1995.

In spite of their recent struggles, the Magic have many young and athletic players. They still have the same players who were playing among the best teams in the league at the end of December. They are going through a slump but they can snap out of it at any time and so the Celtics have to take them seriously. In spite of their win on Friday, they have to be ready for the Magic to come out strong in this one. 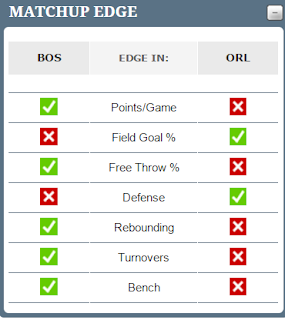 Jared Sullinger vs Nikola Vucevic
Vucevic is averaging 16.8 points and 8.7 rebounds and 1.08 blocks per game. He is an interior defender as well as a force on offense in the paint. Sully did a good job keeping him away from the basket in Friday's game and needs to continue that in this game.

Avery Bradley vs Victor Oladipo
Oladipo is averaging 13.6 points, 4.8 rebounds, 4.0 assists and 1.26 steals a game. In the Magic's November win over the Celtics Oladipo led the Magic with 19 points, 8 rebounds and 6 assists. In Friday's game he was held to just 11 points and 2 assists. Avery's defense will be needed in this game to slow him down and keep him from having a big game.

Honorable Mention
Jae Crowder vs Tobias Harris
Harris is averaging 13.7 points, 7.1 rebounds, 2.2 assists and 1.0 steal per game and is capable of having a big game both in scoring and in rebounding. He was held to just 10 points and 6 rebounds in Friday's game. Jae needs to do more of the same in this game.

Keys to the Game
Defense - Defense wins games pure and simple. The Celtics' tough team defense has been instrumental in building their5 game win streak. The Magic are averaging 98.8 points per game but they have players who, if allowed to get hot, can put up a lot of points. Orlando is 7th in the league allowing just 99.4 points per game. The Celtics have to play tough team defense if they want to get a win in this one.

Be Aggressive - The Celtics need to be the more aggressive team. They must be the first to loose balls and rebounds, and they have to be aggressive in driving to the basket and not always settling for jumpers. They must be aggressive on defense and set the tone for the game. They have to play like they want it more. They did that in Friday's game and need to do it again.

Move the Ball Carefully - The Celtics have to move the ball and find the open man. But in moving the ball, they have to make careful passes and not get sloppy. The Magic average 16.8 points off of turnovers and so they will make the Celtics pay if they don't take care of the ball.

Play 48 Minutes - The Celtics have to get off to a good start and build a lead and then not let up until the final buzzer. They have to be ready for every Magic run and meet it with defense and then make their own runs as they did against the Nuggets on Wednesday and the Magic on Friday. They have to play from opening tip till final buzzer with no let up.

Officiating Factor - Officiating will be an X-Factor for every game. Every crew has their own way of calling the games and they have their own agendas. Will they call it fairly or in favor of one team or the other? Will they let them play or call every little minor contact? The way the game is called always has an effect on the players and the way they play.

Official Report
Zach Zarba
Zach Zarba has officiated 764 regular season NBA games, 39 playoff games and three Finals game during his 12 year career. Prior to joining the NBA, Zarba officiated in the NBA Development League for two years, where he was part of the crew that officiated the 2003 D-League Finals. He also spent one year officiating in the CBA and two years officiating in the IBL. Zarba has three years of collegiate officiating experience in the ACC, SEC, Colonial, ASUN, OVC and NEC Conferences. In addition, he has three years of high school officiating experience in New York.

The Celtics are 2-1 this season and 3-7 in their last 10 games with Zarba. He called the first game of the season vs the Sixers and the officiating in that game was good. In a win over Cleveland last season, however, Zarba made 3 terrible calls down the stretch which prompted Tommy to say "Zach Zarba, every time we have this guy he makes things up." He called the game vs OKC this season and overall let them play but gave OKC the benefit on quite a few calls that even Scal mentioned. But overall, they let them play. In the loss to the Nets this season, there were a lot of bad calls going both ways. They called a lot of ticky tack contact and there was no flow to the game. The Magic are 3-7 in their last 10 games with Zarba and this is his first game with them this season. His home W/L record this season is 20-17.

Corbin has been good in most of his games with the Celtics without any bad games standing out until last season. In the game vs the Pacers, there were a lot of terrible calls down the stretch including an out of bounds call that was obviously wrong and pretty much gave the game to Indiana. Other than that, he's been decent. He called the game with the Sixers this season and let them play and it was well officiated. The Celtics are 3-0 this season and 4-6 over their last 10 games with Corbin. The Magic are 1-2 this season and 3-7 over their last 10 with Corbin. Corbin is a homer ref with a home W/L record so far this season of 24-12. Last season he had almost twice as many home wins as road wins in his record.

Richardson is known for being inconsistent with his calls, especially on charge/block calls. In the game last season against the Lakers, the officiating was terrible. The calls went the Lakers way throughout the game. They ejected Thomas on a bogus call. Smart and Zeller both fouled out. LA shot 38 free throws to 27 for the Celtics. Even the Lakers fans were complaining because the refs were ruining their tanking effort. He called the Hawks game this season and let both teams play for most of the game but down the stretch called some ticky tack fouls on the Celtics that they had let go the rest of the game. The Celtics are 1-1 this season and 3-7 over their last 10 games with Richardson. The Magic are 1-0 this season and 3-7 over their last 10 games with Richardson as a ref. His home W/L record this season is 17-11.