Celtics look for 2nd straight win as they host the Pistons

The 7th place Celtics host the 8th place Pistons with just half a game separating the two teams.

Share All sharing options for: Celtics look for 2nd straight win as they host the Pistons

This is the 3rd meeting between these two teams this season. The series is tied 1-1 with each team winning one game in Detroit. The Pistons won the first meeting 119-116 on 12/16 while the Celtics evened the series with a 99-93 win on 12/26. They will meet one more time in February at the TD Garden.

Avery Bradley is expected to miss his second straight game with a hip injury. Isaiah Thomas missed Tuesday's practice with a minor thumb sprain but is expected to play in this game. He will be a game time decision. Brad Stevens shook up the lineup for the last game against the Nets with Evan Turner and Kelly Olynyk in the starting lineup. I'm assuming that he will stick with this lineup for this game, but I could be wrong.

The Pistons will be missing Jodie Meeks who is not expected back until February. Brandon Jennings has returned from the Achilles injury that kept him out of the first two games against the Celtics. In Monday's game, Jennings scored 17 points in 18 minutes so the Celtics will need to pay attention to him on defense. Marcus Smart is back in the lineup for the Celtics after missing both games against the Pistons in December. 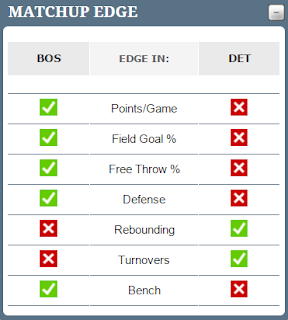 Isaiah Thomas vs Reggie Jackson
Jackson is very quick and is always a threat to drive to the basket. He is averaging 19.7 points, 4.1 rebounds, 6.4 assists and 0.9 steals. The Celtics will miss Avery Bradley's defense on Jackson and it will be up to the combo of Isaiah Thomas, Evan Turner and Marcus Smart to slow him down on the offensive end.

Kelly Olynyk vs Andre Drummond
Drummond is a beast in the paint on both ends of the court and is averaging 18.1 points, 16.0 rebounds, 1.8 steals, and 1.5 blocks per game. Last season in the 3 games against the Celtics, he averaged 22.3 point and 16.7 rebounds. In the two games this season, he is averaging 19 points and 17 rebounds. Drummond's weakness seems to be from the line where he is shooting just 36.5%. The Celtics will have their hands full trying to slow him down on offense and on the boards. I'm not so sure that Kelly is strong enough to defend Drummond.

Honorable Mention
Evan Turner vs Kentavious Caldwell-Pope
In the first game between these two teams, Caldwell-Pope scored a career high 31 points and he hit 4 clutch free throws down the stretch. He came back to earth with just 6 points in the second game. But he is capable of having a big game and so the Celtics need to stay with him on defense.

Keys to the Game
Run, Run, Run - The Celtics have proved that when they run and move the ball up the court quickly, good things happen. When they over dribble and slow the game down, they struggle all the way around. They need to push the ball on every opportunity and push the pace, but also play under control.

Defense- The Celtics need to play tough team defense, especially in the paint. It doesn't matter how much they score if they can't stop the Pistons from scoring more. Both teams pride themselves on defense. The Celtics are 8th in the league allowing 99.0 points per game while the Pistons are 10th allowing just 99.4 points per game. The Celtics must play tough team defense and get stops especially at the end of the game. No let ups!

Move the Ball - The Celtics must move the ball and find the open man. They struggle to score when the ball stops moving. In the Celtics most recent losses they averaged 18 assists. They are 5th in the league in assists with 23.8 and it's not a coincidence that they win when their assist total is higher and they lose when it is lower.

X-Factors
Home Factor - Usually playing at home means that the team will get a boost from the home crowd and it gives them an advantage. But the Celtics are a curious team in that their record on the road is better than their record at home. Since March 21, 2015, the Celtics have a 17-6 road record second only to the Golden State Warriors. Hopefully they can get it together and start winning at home as well.

Official Report
James Capers
The son of former NBA official James Capers Sr., James Capers has officiated 1,172 regular season games, 78 Playoff games and five NBA Finals games during his 20-season NBA career. In addition to his NBA experience, Capers has six years of CBA officiating experience, including three CBA Finals and two CBA All-Star Games. I've seen several posts from Lakers fans who swear he hates the Lakers. At least he has that in his favor. In 2012, Capers called game 2 of the ECF and the officiating was terrible in that game. The Heat shot 47 free throws to 29 for the Celtics. Pierce, Dooling and Pietrus all fouled out. There were bad calls and missed calls throughout the game. Lebron James took 24 free throws himself, only 4 less than the entire Celtics team.

He was lead official in the Nets game that resulted in a brawl two seasons before last. Capers gave Doc a T for yelling to Rondo. They let the Nets get away with pushing and shoving and hard fouls the entire first half. The Nets shot 17 free throws to 5 for the Celtics in the first half and 3 of those free throws were on technicals. They did better in the second half after the brawl, but the refs' failure to call the game evenly in the first half led to the fight.

Last season, he called the Golden State game and made a terrible call to end the first half on a last second heave. Even the Warriors fans thought it was a terrible call. The calls all went the Warriors way down the stretch and Warriors fans couldn't believe how they were getting the benefit of all the questionable calls. He called the game at Brooklyn this season and he made several terrible calls. One of the worst was an offensive foul call on Jae Crowder that should have been a 4 point play. This was with 1:29 to go when the Celtics were making a come back.

He called the win over Miami this season and for the most part let both teams play. But, made a few bad calls against the Celtics down the stretch. With just over 2 minute left, they called a foul on Amir Johnson for a foul when Amir and Bosh were both scrambling for a loose ball. Amir was on the floor with the ball and Bosh landed on top of him. It gave Miami possession in a close game. The Celtics are 1-1 this season and 3-7 in their last 10 games with Capers. The Pistons are 1-1 this season and 4-6 in their last 10 with Capers. He is a homer ref with a home W/L record this season of 17-8.

Celtics fans will remember Kennedy's run in with Doc Rivers that resulted in both of them being fined. Yes, David Stern fined one of his precious refs. Here is how Doc described the incident:

Doc was fined for criticizing a referee, but since the league fined Kennedy, they as much as admitted that Doc's criticism was deserved. According to Tim Donaghy, Bill Kennedy is gay and his beef with Doc stems from Doc questioning his sexual orientation. With Doc out in LA, that should be in the past. He may even feel a certain kinship with the Celtics with both of them being dissed by Doc and all.

The last couple of seasons, he has been decent in the games he's called for the Celtics. This season, he called the game against the Kings in which he tossed Rondo for making an anti gay slur toward him. He calls an average of 41.4 fouls per game with 54.1% on the road team. The Celtics are 1-1 this season and 6-4 in their last 10 games with Kennedy while the Pistons are 0-1 this season and 4-6 in their last 10. Kennedy's home W/L record this season is 18-9.

Richardson is known for being inconsistent with his calls, especially on charge/block calls. In the game last season against the Lakers, the officiating was terrible. The calls went the Lakers way throughout the game. They ejected Thomas on a bogus call. Smart and Zeller both fouled out. LA shot 38 free throws to 27 for the Celtics. Even the Lakers fans were complaining because the refs were ruining their tanking effort. He called the Hawks game this season and let both teams play for most of the game but down the stretch called some ticky tack fouls on the Celtics that they had let go the rest of the game. The Celtics are 1-0 this season and 4-6 over their last 10 games with Richardson. The Pistons are 2-8 over their last 10 games with Richardson as a ref. His home W/L record this season is 13-7.