The Celtics host the Knicks as they look to finish a 5-0 home stand and win the season series over their division rivals.

Share All sharing options for: The Celtics look to close perfect home stand with a win over the Knicks

The Celtics remain in 3rd place in the East and are just 1.5 games ahead of the Heat who won once again against the Suns on Thursday night. The Heat's next opponent is the Sixers. The Heat have one of the easiest remaining schedules while the Celtics have one of the toughest and so they are going to have to continue to win, especially the games they are supposed to win, in order to stay ahead of the Heat. The Knicks have dropped to 13th in the East, 6.5 games out of 8th.

The Celtics will once again be missing Kelly Olynyk who is progressing from the shoulder injury but is still out. RJ Hunter was assigned to the Red Claws on Thursday and will probably remain there for this game. Cleanthony Early is out with a knee injury for the Knicks and Lou Amundson is expected to return from a respiratory infection. 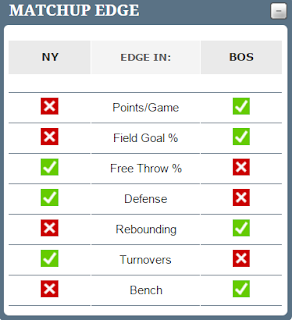 Jae Crowder vs Carmelo Anthony
Jae Crowder is earning a reputation as one of the top wing defenders in the league and he will need to put that to the test to guard Melo, who is averaging 21.5 points, 8.0 rebounds and 4.2 assists. In their last meeting, Melo finished with 16 points and 14 rebounds. Jae needs to limit Melo on the offensive end and make him work on the defensive end as well.

Amir Johnson vs Kristaps Porzingis
The Knicks 7'3" rookie is averaging 14.0 points, 7.9 rebounds and 2.0 blocks per game and he has long since changed the boos he heard on draft night into cheers. His length makes him tough to handle and the Celtics will have their hands full, especially keeping him off the boards.

Honorable Mention
Avery Bradley vs Arron Afflalo
Afflalo is averaging 13.9 points, 3.8 rebounds and 2.0 assists and is capable of putting up big numbers if not guarded closely. In the last two games vs the Celtics he has averaged 21 points and so Avery needs to stay with him to keep him from having another big game.

Run and Move the Ball - The Celtics need to run on every possession from start to finish. It seems that when they run they build leads and outplay the other team. When they slow it down, they fall behind and lose leads. They have to run and keep up the pace for the whole game. They also need to keep the ball moving to find the open man and the best shots. They need to play team ball and not lapse into hero ball.

Limit Turnovers - Sometimes ball movement results in too many turnovers. The Celtics have to be careful not to make careless and bad passes. They also need to keep their focus and not allow the Knicks to get steals that would lead to easy baskets.

Play Hard 48 Minutes - Sometimes when the Celtics face teams that should beat, the Celtics let up and don't put out the effort that they do against the tougher teams. They need to start strong and give maximum effort for the full 48 minutes. No let up!

X-Factors
Home Game - To say that the Celtics are playing very well at home is an understatement given that they have won 12 straight on the Parquet. They need to keep up the effort at home and be motivated by the home crowd to run that streak to 13.

Officiating -
The officiating is always an X-Factor. You never know if a crew will call the game tight or let them play and the team has to be able to adjust to any officiating style. And you never know when a ref will have an agenda and call it one sided for one of the teams. We can only hope for an evenly called game where they let them play.

Official Report
Marc Davis
Marc Davis has been an NBA official for the past 17 seasons, working 977 regular season games, 55 Playoff games, and the 2007 NBA All-Star Game. Davis has officiated four Finals games during his career. In addition to his NBA experience, Davis has three years of CBA officiating experience and three years of collegiate basketball officiating experience in the OVC and TAAC Junior Colleges. He grew up in Chicago and is still active in the Chicago area.

Davis was investigated for threatening to whoop Allen Iverson's a** when AI complained about a call in a game in 2005, but was not suspended for it. The Celtics history with Davis goes way back also. In 2009, Davis was seen after a Celtics/Bulls game with his family all decked out in Bulls gear. It was Davis that Rajon Rondo bumped in a terribly officiated playoff game vs Atlanta and was ejected and suspended for it.

In a game three seasons ago against the Bulls, the officiating was terrible. With 12 seconds left, Pierce was trapped and fouled, including a busted lip, right in front of Davis with no call. Rondo was signalling for a time out right in Davis' face but they called a jump ball instead of calling the foul or the time out. Even Hubie Brown was talking about how bad the calls were the entire game and Hubie doesn't usually comment on the officiating. Two seasons ago, in a game against the Kings, Davis even got to the mild mannered Brad Stevens. Davis ignored obvious pushing and shoving by DeMarcus Cousins all night. At one point, Gerald Wallace pointed out an obvious foul by Cousins and was tossed to which Stevens pointed out that he could have thrown out Cousins all game and was tossed as well. He was decent in each of his games last season and, if anything, in a couple of the games, he gave the Celtics the benefit of the doubt. I wonder if his problem was with Rondo all along and with Rondo gone, he's feeling a kind of kinship with the Celtics. Stranger things have happened,

Tony Brown
Tony Brown has officiated 777 regular season games and eight- Playoff games in his first 13 seasons as an NBA official. Prior to joining the NBA, he officiated for four seasons in the NBA D-League and CBA and three seasons in the WNBA. During that time he worked the 2002 Finals, the 2002 WNBA All-Star Game and the 2001 CBA Finals. As with most refs, Brown has been good and bad in past games with the Celtics. In some the officiating is one sided and in others very good. Brown called Game 1 of the Rockets/Mavs playoff series and it was very one sided against the Mavs. The Rockets shot 45 free throws to 17 for the Mavs. Of course, he called the game with Joey Crawford and that could account for a lot of the controversial calls.

This season, in the loss in Dallas, the officiating was terrible. After they called 2 clean blocks by the Celtics fouls, Tommy yelled, "That's 2 strikes against them." Then after failing to call a Parsons elbow to Smart's head right in front of the ref, Tommy yelled "This is getting obnoxious." They were so bad they even got an "Oh, come on!" from Mike who rarely complains. Here are just a couple comments from among many from Mavs fans:

Ervin’s resume includes 8 years of collegiate officiating experience, with 6 of those years in Division I having officiated in the Big 12, Conference USA, Big South, Sun Belt, Southland and Southwestern Athletic Conferences. During his stint in Division I, Ervin was selected to work in the 2013, 2014 and 2015 Southland Conference Tournament, as well as the 2015 Sun Belt Conference Tournament in which he officiated in the conference tournament semi-finals. He also has one year and five years of high school officiating experience in New Orleans, Louisiana and Houston, Texas respectively.

Prior to becoming a professional basketball official, Ervin was a middle school physical education teacher, football, basketball and track coach. Ervin graduated with a dual Bachelor of Science degree in Sport Management and Exercise Physiology from the University of New Orleans, where he was a member of Kappa Alpha Psi Fraternity, Inc. and a walk-on member of the 1997 – 98 Privateer basketball team.