Miami Heat visits the Celtics to close out the season with playoff seeding still on the line.

Share All sharing options for: Celtics look to finish season on a high note as they host the Miami Heat


The Celtics close out the season with the third and final game against the Miami Heat. The Celtics lead the series 2-0 and so will own the tie breaker regardless of the results of this game. The Celtics beat them in Miami in November and in Boston in February. A sweep would be sweet, especially to give the Celtics a psychological advantage if these two teams meet in the playoffs.

The Heat's roster features a total of 38 All-Star selections, and they are a formidable foe, but the Celtics' youth may be a plus if they can run the older Heat and tire them out. The Heat are playing in the second of back-to-back games, playing in Detroit on Tuesday night, and that could also affect the fatigue factor.

This is the Celtics 3rd big game for playoff seeding in a row. The Celtics lost to the Hawks in the first one, eliminating their hopes for the 3rd seed. They then lost to the Charlotte Hornets in embarrassing fashion, making this a must-win game to have a chance at the 4th spot and home court advantage in the first round. The Heat are 3-9 when playing on Wednesday night.

The Celtics are getting healthy leading into the playoffs. Evan Turner and Marcus Smart are playing through eye injuries. Jae Crowder is working his way back from the ankle injury that sidelined him for 8 games and has been playing through an illness that hit him over the weekend. But all should play. For the Heat, Tyler Johnson (shoulder), Udonis Haslem (foot) and Chris Bosh (blood clot) are out and Justise Winslow (ankle) is questionable. Goran Dragic lost a tooth in last night's game vs Detroit, but it didn't stop him from finishing that game and apparently won't hinder him in this game.

With their loss to the Hornets, the Celtics dropped to 5th place in the East. They are 1 game behind both Atlanta and Miami. Charlotte is tied with the Celtics but in 6th place due to the tie breaker going to the Celtics. The Celtics can end up anywhere from 4th to 6th place depending on the results of the final night of the season. The Celtics and Hawks both have to win in order for the Celtics to claim the 4th spot and home court advantage. Beyond that, you can see all of the other scenarios here. Games to watch: ATL@WAS, ORL@CHA. 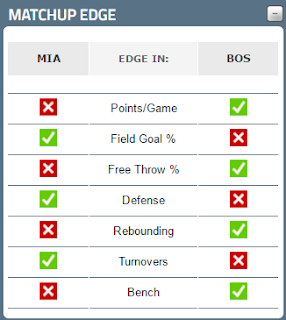 Avery Bradley vs Dwyane Wade
Wade isn't the player he once was, but he is still dangerous when he gets going. He has also had to pick up his game and shoulder more of the load with Bosh out. He is averaging 19.1 points, 4.1 rebounds, 4.7 assists and 1.1 steals per game. Bradley has always played him well and hopefully he can contain hm in this game.

Isaiah Thomas vs Goran Dragic
Thomas and Dragic are two former Phoenix teammates facing off against each other. Dragic was considered to be the premiere point guard that was traded, but Isaiah has proved to be the real prize from last year's trade deadline. Dragic is averaging 14.1 points, 3.9 rebounds and 5.9 assists. It would be great if Isaiah could show him up in this head to head matchup.

Honorable Mention
Jared Sullinger vs Hassan Whiteside
Miami recently moved Amare Stoudemire to the bench and Whiteside back into the starting lineup. Whiteside leads the Heat with 41 double-doubles. He is averaging 14.2 points, 11.9 rebounds, and a league best 3.7 blocks per game. Jared will have his hands full trying to slow Whiteside down and trying to keep him off the boards and away from the basket.

Keys to the Game
Defense
Defense wins games. The Heat are allowing just 98.5 points per game while the Celtics are allowing 102.7 points per game. The Celtics have strayed from that defensive mindset that had them in the top 5 defenses in December. They must get back to making defense a priority and play tough team defense. The team that is able to lock down on defense will be the team to get the win.

Rebound
Crashing the boards will give the Celtics extra possessions as well as keeping the Heat from getting fast breaks and second chance points. However, Hassan Whiteside has been cleaning up on the glass for the Heat and the Celtics will need to work hard to win the rebounding battle.

Be Aggressive
The Celtics have to be aggressive in going to the basket and not settle for jumpers, especially if the jumpers aren't falling. They have to dive for loose balls and be aggressive in crashing the boards. They can't afford to slack off or to allow the Heat to play harder than them. They have to be the team that wants it more. Home court in the first round is on the line and the Celtics must give it their all in this game.

Run and Play 48 Minutes
The Celtics need to run on every possession. They have the legs to keep it up and not let up and to tire the older Heat out, who are also playing in back to back games. The Celtics need to run and to play hard from the opening tip until the final buzzer. If they should get a lead, they have to work even harder to keep it. They have been giving up big leads lately and the Heat have come back from at least 15 down to win 6 times this season. No let up from start to finish.

Move and Take Care of the Ball
The Celtics need to move the ball to find the open man and the best shot possible. When the ball sticks and players try to do too much and not play team ball, they tend to struggle. They also need to take care of the ball and not make careless passes and turn the ball over because if they do, the Heat will make them pay. Over the last 8 minutes of the 2nd quarter against Charlotte, the Celtics seemed to turn the ball over on every possession. They have to keep their focus and limit turnovers.

Official Report
Mike Callahan
A veteran of 25 NBA seasons, Mike Callahan has officiated 1,483 regular season, 156 Playoff and 16 NBA Finals games.He was a member of the crews that officiated the 2007 NBA All-Star Game, 1994 Mexico Challenge and the 1996 Schick Rookie Game. Prior to joining the NBA, Callahan spent three years officiating in the CBA, including the 1989 and 1990 CBA Finals. A member of the Cardinal O’Hara High School basketball team for four years, Callahan also coached the freshman basketball team after graduating.

Callahan called game 1 of the Cleveland series in last season's playoffs. The refs were terrible in that game. Even the national TV announcers continually pointed out bad calls and how LeBron got away with so much They also mentioned that if LeBron was called for even half of his infractions the game would have changed. Cleveland shot 33 free throws to 22 for the Celtics. He called the second game this season against the Raptors and it was officiated ok as was the win over the Nets. He called the game at Denver where there were bad calls both ways all game but more seemed to go against the Celtics with the Celtics ending with 20 free throws to 34 for the Nuggets.

The last game he called was the Celtics' February win over the Heat. The refs missed a few calls both ways but overall let them play and pretty much called it even. As with most refs, Callahan can be good or he can be very, very bad. He usually lets the teams play and isn't a tyrant with the whistle but still makes some head scratching calls from time to time. The Celtics are 4-2 this season and 6-4 over the last 10 games with Callahan. The Heat are 3-3 this season and 6-4 over their last 10 games with Callahan. His home W/L record this season is 29-32.

Forte was one of the refs that officiated a Celtics win in Indiana 2 seasons ago. The officiating in that game was horrible and very one sided toward the Pacers. One of the comments from the Pacers' forum said that they wouldn't blame Celtics fans if they punched out the refs. It's bad when the officiating is so terrible that the opposing fans feel bad about it. Tommy also had this to say, "I hope this group of officials doesn't officiate the playoffs. Holy cow! They are terrible." He's been good in more recent games, however. He called the wins vs Rockets, Sixers, Suns, Nets, and Wizards this season and the officiating in all of them was good. They let them play and didn't interfere with the flow of the game. The Celtics are 6-0 this season and 10-0 in their last 10 games with Forte officiating. The Heat are 3-0 this season and 5-5 in their last 10 with Forte. His home W/L record this season is 37-28.

Eric Lewis
Lewis has spent the last 12 seasons in the NBA, officiating 618 regular season games and 14 playoff games. Lewis spent two years working in the USBL, officiating the Finals in 2002 and 2004. Prior to that he spent three seasons in the NBA D-League, where he worked the 2003 and 2004 Playoffs and 2004 Finals. He tallied eight years in the college ranks, participating in the Atlantic Sun, Ohio Valley, Sunshine State, Florida Sun and Mid-Florida conferences. Lewis officiated in Florida high schools for six years.

A Cavs game last season was called pretty much one sided in favor of the Cavs (Aren't they all?). A Hawks game last season was also called one sided toward the Hawks down the stretch. In a game against the Pistons last season, the officiating was one sided toward the Pistons, who shot 43 free throws to just 24 for the Celtics. This season, He was terrible in the 4th quarter of the game vs the Grizzlies. They let a lot of contact by the Grizzlies go while calling a lot of questionable fouls on the Celtics. He failed to call a 5 step travel on Gasol right in front of him that could have changed the end of the game. Memphis shot 20 free throws to 23 for the Celtics.