Looking for their 4th straight win, the Celtics host yet another team that is struggling with injuries as they take on the Milwaukee Bucks.

Share All sharing options for: Celtics continue quest for 3rd seed as they host the struggling Bucks

The Celtics were a bit sluggish against the very short handed Pelicans on Wednesday as they tried to get acclimated once again to Eastern time. They will need to play better than they did in that game in order to get a win against the Bucks. Even though Milwaukee has lost 7 of their last 10 games, they are still a very long and athletic team with "The Greek Freak" leading the way.

The Bucks are also dealing with injuries with Jerryd Bayless(knee), Michael Carter-Williams(hip), OJ Mayo (ankle), and Steve Novak (knee) all out. Khris Middleton, the Bucks leading scorer at 18.2 ppg, didn't practice on Thursday and is considered doubtful for this game. Evan Turner (eye abrasion) is expected to play but with goggles to protect the eye. He will likely be a game time decision. Marcus Smart received 4 stitches in his eye on Wednesday and is expected to play in this one. Jae Crowder will play but is still trying to get his conditioning back after coming back from the ankle injury.

The Celtics are back in 4th place in the East. They are 1/2 game behind Atlanta (3) and are tied with Miami (5) but own the tie breaker between them. They are 1 game ahead of Charlotte (6). and 4 games ahead of Indiana (7). Milwaukee is 12th, 1.5 games ahead of New York and is playing for ping pong balls. Games to watch: BKN@CHA and MIA@ORL. 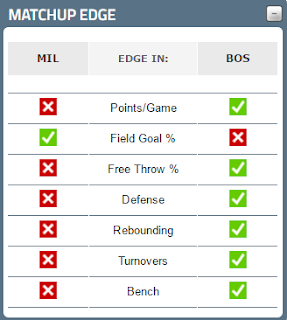 Jae Crowder vs Giannis Antetokounmpo
Antetokounmpo, aka the Greek Freak, is like no other small forward in the league. He is 6'11" tall and very athletic. He is averaging 16.8 points, 7.6 rebounds, 4.3 assists per game. Since the Bucks made Antetokounmpo their primary ball handler in early February, he has averaged 19 points, 8.4 rebounds and 7.8 assists and has been very aggressive. He will be a challenge for Jae to have to deal with on both ends of the court but since he will be handling the ball the majority of the time, it will be important for Jae to defend him well and try to deny him the ball.

Jared Sullinger vs Greg Monroe
Monroe is big and strong and tough to keep out of the paint and off the boards. Sully is going to have to use every bit of his bulk to muscle him away from the basket. Monroe is averaging 15.4 points, 8.9 rebounds, and 2.3 assists per game. He averaged 22 points and 11.3 rebounds in the 3 games vs the Celtics this season.

Honorable Mention
Amir Johnson vs Jabari Parker
Parker is averaging 13.9 points, 5.2 rebounds and 1.8 assists this season. However, over his last 4 games he is averaging 22.5 points, 6.3 rebounds and 3.7 assists. He scored 22 points against the Celtics in their last meeting. Amir Johnson has been playing very well for the Celtics since shaking the Plantar fasciitis that was plaguing him earlier in the season. He will need to play tough on both ends of the court in this game.

Run! - The Celtics are very effective when they run on every possession and run on defense as well. They need to run on offense to get easy shots before the defenses get set up. They also need to run on defense to get set up to prevent the Bucks from getting easy baskets. The Celtics have to utilize their depth by running the other team off the court.

Rebound - The Celtics can't score if they don't have the ball. The Bucks are long and athletic and so the Celtics are going to have to work to win the battle of the boards. It takes effort to rebound and when the Celtics put out that extra effort to get rebounds, it usually translates to other areas of their game.

Play as a Team- The Celtics need to move the ball to find the open man with the best shots. They can't play hero ball as that never ends well. The Celtics struggle when they have fewer than 20 assists and they excel when they have more than 20 assists. But to get assists they also have to hit their shots along with sharing the ball. If the 3's aren't falling they need to get into the paint.

X-Factors
Focus - With Miami and Atlanta both winning on Thursday night, the Celtics need to be motivated to keep up with them in order to have a chance at the 3rd (preferably) or the 4th seed. They have to use that motivation to keep them focused and playing at the highest level to keep winning. They tend to lose focus from time to time and they can't afford to do that if they hope to have home court in the first round of the playoffs.

Officiating - The officiating is always an x-factor. Whether because of the tendencies of individual refs, or an agenda on behalf of the refs or the league, each game is officiated differently and that can favor or throw a team off on any given night. The Celtics have to be able to shake off bad calls and just play their game.

Malloy is very quick to call technicals and in the past has ejected Doc Rivers, Paul Pierce and Kevin Garnett for 2 quick techicals, all 3 of which had one or both rescinded by the league afterwards. He has called games in the past that were lopsided against the Celtics as well as some that were lopsided in favor of the Celtics so you never know which Malloy will show up. In one game against the Pacers last season he made several terrible calls down the stretch including an out of bounds call that was obviously wrong and gave the game to Indiana. The Pacers shot 34 free throws to 16 for the Celtics.

Malloy called the game at Houston this season and was good. Mike mentioned that you didn't notice the refs and that's the best compliment that he could give them. They also called the Wizards game and again they let them play and didn't interfere with the game. Then against the Grizzlies, the officiating was terrible and one sided toward the Grizzlies, with Memphis taking 40 FTs to 23 for the Celtics. He can be good or bad depending on the game. The Celtics are 2-1 this season and 3-7 in their last 10 games with Malloy while the Bucks are 0-3 this seaqson and 2-8 in their last 10. His home W/L record is 31-19.

JT Orr
J.T. Orr enters his fifth NBA season having officiated 162 regular season games. Orr’s experience includes five seasons and 177 games officiated in the NBA D-League. He also has four seasons of NBA preseason experience and has worked in NBA summer camps for nine years. In addition to his professional experience, Orr officiated collegiate games for 13 years, working the NCAA tournament in 2011 and including service for the PAC 10/12, West Coast and Big West Conferences and multiple small college conferences. He also has 15 years of high school officiating experience.

The Celtics are 3-1 this season and 7-3 over their last 10 games with Orr as a ref. As with most refs, he can be good or bad. He has called a few one sided games where the Celtics can't get a call and others where the officiating is even. He hasn't been particularly bad in any of his games with the Celtics, however. He called the last game in February against the Bucks and they let them play,missing a lot of contact both ways. The Celtics got the better end of it with 33 FT to 25 for Milwaukee. The Bucks are 1-3 this season and 3-7 in their last 10 games with Orr. His home W/L record this season is 33-21.

Mark Lindsay
Mark Lindsay has officiated 479 regular season games and one playoff game in his eight NBA seasons. Prior to working in the NBA, he worked for five seasons in the NBA Development League, officiating 116 games, including playoff games in 2005, 2006 and 2007. Lindsay received a Bachelors degree in Elementary Education and graduated with honors from West Chester University where he was a three year letterman on the Men’s Varsity Basketball team. He later worked as a teacher and a real estate sales agent and officiated in several college conferences, including the ACC, Colonial Athletic Association, Atlantic Sun, Big South and Ohio Valley Conferences before joining the NBA.

The Celtics are 4-0 this season and 5-5 in their last 10 games with Lindsay making the calls. One win last season was a 101-95 win over Chicago where the Bulls shot 31 free throws to 16 for the Celtics and there were more than a few questionable calls. But then, he called a game vs the Mavs where the Celtics shot 30 free throws to 17 for the Mavs and the Celtics got the benefit of some questionable calls. In a game last season vs the Cavs the officiating was terrible, with bad calls going both ways. Tommy had this to say about it: "I don't remember when there was such a plethora of terrible calls throughout." Lindsay also called the game vs the Bulls with Jason Phillips where the Celtics took 11 free throws to 40 for the Bulls and where Tommy described it as an abomination and not even close to a decently officiated game.

Lindsay also called the Lakers game, where calls were going against the Celtics throughout the game. Isaiah Thomas was ejected on a bogus call and that technical was later rescinded. Smart and Zeller fouled out and the Lakers shot 38 free throws to 27 for the Celtics. One comment from the Lakers board says it all: "The refs are screwing our tank." He can be good and he can be bad depending on the night. The Bucks are 1-2 this season and 4-6 in in their last 10 with Lindsay. His home W/L record this season is 36-23.