If you are a post-Bird Celtics fan, the NBA draft has been been a major character in franchise's narrative and for the past 13 years Danny Ainge has been the casting director. Ainge's drafting prowess has become a point of contention for Celtics fans and basketball pundits alike. Part of the reason it has been a talking point for podcasts and bloggers is because of Ainge's perennial newsy drafts and out of the box selections. Also, the Celtics during Ainge's tenure have picked in almost every tier of the draft, which is rare and allows for a type of judgment that is not applicable to many front office leaders. On top of that, they've had quite a few multi-pick years, which makes for a deeper pool of choices to judge. I write all of this because I have heard/seen enough "Danny Ainge is shaky drafter" takes that I had to look at it in a real way. Why has he become a target and is it fair? A few things first.

1) If you do anything for long time, you're going to make mistakes.

2) Drafting prospects is hard, most decision-makers aren't good at it.

3) I operate under the assumption that whatever choice a front-office makes in regard to the draft is better than mine because I have done zero real evaluation work.

4) I am not going to play the "we could've had Player X" game, it's depressing, dumb and not realistic. I am also looking at 1st-round picks only.

5) And finally, most draft picks stink. The chart below (courtesy of Bradford Doolittle at ESPN) shows just that. We talk about the exceptions (the non-lottery stars) way more than the norm (the duds). If you can get a useful NBA player outside of the lottery, it's a win. Also, its an incredibly steep drop off after the top-3, which we've only picked in once. 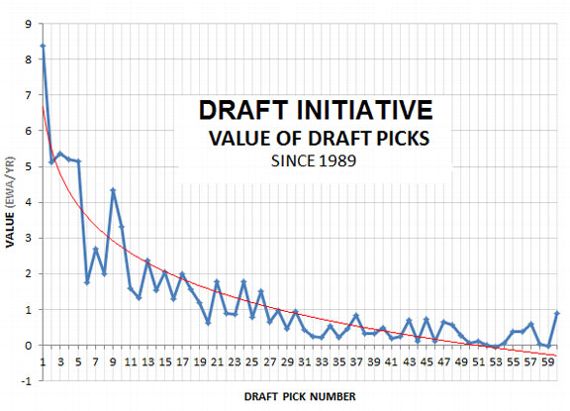 I find a good way of judging these picks is VORP, value over replacement player, especially compared to their draft slot. So without making it too complicated, I will list the VORP according to Basketball-Reference for each pick as well as any additional context needed. So, let's start from the beginning...

Boom. Three good/very good NBA players in the back half of the first-round right of the bat. Most GMs would be happy with this haul over 3 years and this was in one. Verdict: Good Danny

Danny is known as a risk-taker in the draft but is taking a big swing with the 18th pick a risk? If it hits, it's a franchise changer. If it misses, well then it's not much different that every other late-teen draft pick. Verdict: Bad Danny (but I really don't believe that)

Now it gets tricky. Boston traded Randy Foye, Raef LaFrentz and Dan Dickau for Sebastian Telfair, Theo Ratliff and a 2008 2nd-round pick. AND THEN, we traded for the 21st pick, Mr. Rajon Rondo (20.9). To look at this in it's most simplistic form, Danny got one of the most dynamic players in the NBA in a weak draft with no top picks. The trade was pretty much a wash. Randy Foye is a more useful player than Sebastian Telfair but their was a big age difference and he still had a unknown ceiling. It was also worth moving LaFrentz's contract. Verdict: Good Danny

There aren't many Jeff Green fans left out there BUT WHO CARES!! RAY ALLEN!!!!! Verdict: Good Danny

Again, WHO CARES!!! Championship BABY!!! Seriously though, this is one of the picks I have heard referenced when talking about Danny's spotty track record. IT"S THE 30th PICK!!!! Verdict: Kiss the Ring

Say what you want about AB, but getting a first-team all-defensive guard who is a great culture guy is a huge win in the late-teens. Verdict: Good Danny

This was a lost year but again, we're talking about picks made in a range where it's rare to get a real NBA player Verdict: Bad Danny (but not really)

Fab Melo is ground zero for Bad Danny but Jared Sullinger is a useful NBA rotation player who can help you win games. Getting someone like that in the 20s is a win. So even though Fab is a hilarious disaster, this year is a wash and I know I'm a broken record at this point but when you're picking in the 20s what exactly do you expect? Verdict: Push

In a vacuum, what a steal. But this is when the nonsense starts with "but we could have had Greek Freak!" Sure, whatever. What-ifs are fun but it's not how you judge decisions. Danny got a 7-footer that stretches the floor, is a good teammate and a real NBA rotation player outside of the lottery. It's a win. Verdict: Good Danny

Stats aren't super valuable here but I don't see how anyone who's rational would day this is bad draft. We aren't sure what we have with Marcus Smart but there's no way (if healthy) he's not a successful 6th pick. Take a look at the history, it's ugly. Every pundit thought that James Young was a great pick and it doesn't look like it's going to work out. Taking a risk on lottery talent is always worth it outside of lottery. Verdict: Good Danny

The worm started to turn with Danny in this draft. I freaked out when we took Rozier but trusted that Ainge and Stevens know more than me (because they do). It was a 15 player draft and they had the 16th pick, if Terry Rozier becomes an effective role player on a 50+ win team, that's really good for that slot. Double that for RJ Hunter Verdict: TBD

To be determined. This class will be a major character in the Danny draft story because he finally had a top-3 pick (in a 2-man draft but whatevs) and went international. If Yabusele and Zicic come over and help, they are a success. Jaylen Brown is the first guy Ainge has a drafted that can be looked at as a real failure if he isn't a good starter/borderline all-star. But even then, WE ARE GOOD!! It was a free pick.

I am a Danny apologist and a huge homer. That being said, how is he a shaky drafter? He's has missed in ranges where is doesn't matter, found real NBA players where others don't and hasn't had a top-5 pick until this year. So because he doesn't follow your mock draft or takes risks on guys that could fail, he is a shaky drafter? Or is it just easier to use a cliche and not exactly put any thought into it. It's more of the latter and I don't think any rational basketball fan could look at these first-round picks, their selection slot and quality and say Danny isn't in the upper echelon of the league's decision makers.