Brad Stevens: “we saw more of what we want to be”

After another loss in the clutch in Charlotte, head coach Brad Stevens sees improvement.

Share All sharing options for: Brad Stevens: “we saw more of what we want to be”

At the start of the season, the Celtics were one of the favorites in the Eastern Conference with some pundits ticketing them to a Finals showdown with the Golden State Warriors and many picking them to raise the Larry O’Brien. Those summer plans are still on the books (just ask Jaylen Brown), but as fall turns into winter, Boston is still struggling with pre-season problems with now a 9-8 record.

After another close loss to the Charlotte Hornets, Brad Stevens said, “I did see some more what I would refer to as Celtic basketball than I’ve seen at least over the better part of the season. I leave a lot more encouraged now than discouraged when I came into the game.”

Coach Stevens breaks down why Kemba's performance out shined the Celtics (Presented by https://t.co/Av8GdCiYr0) pic.twitter.com/ISW122AVwi

It’s not exactly a murderer’s row, but they beat both East leaders in the Bucks and Raptors and were in clutch situations in Utah, Portland, Denver, and Indiana, but ultimately came up short. They faced five of the top-8 teams in NetRtg and were competitive in all of those games. Even Charlotte, who was supposed to be the start of a stretch of manageable games for Boston, is 11th in NetRtg with flamethrower Kemba Walker scoring 103 points over two games.

For what it’s worth, the Celtics have an OffRtg of 106.7 and a DefRtg of 106.2 over that same stretch. That’s good for a below average offense (18th) and an above average defense (10th). Those are “treadmill of mediocrity” numbers, but there are signs of improvement. 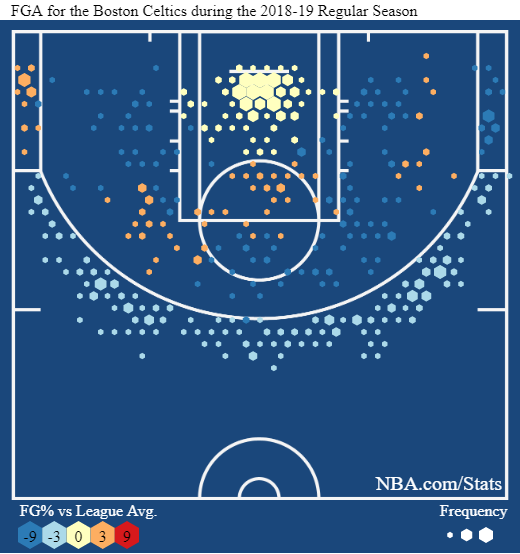 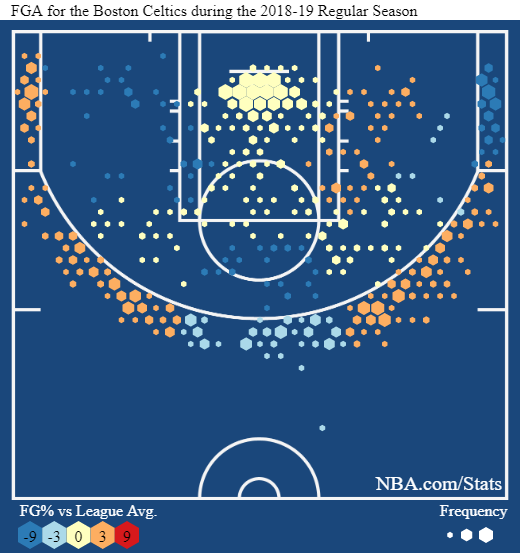 When Stevens talks about this team looking more like “Celtics basketball,” the devil is in the details. There are some headline numbers that pop off the box score; the Celtics outran the Hornets 22-6 in fast breaks and outscored them in the paint 52-44. While they’ve gotten open shots all year, they haven’t gotten easy buckets at the rim.

It isn’t exactly Showtime, but that break is highlight by Al Horford running hard to the rim, establishing position, and Jayson Tatum and Kyrie Irving reading the play and delivering the ball at the right spot.

That focus on getting paint touches has been evident in the half court offense, too. Gordon Hayward has gotten deeper in defenses as a playmaker and by tinkering with the starting lineup and inserting Aron Baynes in Hayward’s place, it shrinks the defense and create better looks from behind the arc.

The Celtics were only 9-of-32 from 3, but so many of their attempts came off of penetration.

And if that shot wasn’t available on the first swing, the ball was often driven again for an easier shot.

This is speculative and it’s a subtle thing, but there’s a more natural pace to inside-outside basketball. As a shooter, when you’re catching the ball in front of you after it’s hit the paint, there’s a fluid timing with the shot going up.

The thinking early in the season was that by having floor spacers spread all over the court, it would give the offensive talent of the Celtics roster room to work and create open looks on the perimeter. Unfortunately at times, that created a “your turn, my turn” rhythm to shot generation. With role players like Baynes playing with Irving or pairing Hayward who (instinctively has more of a playmaker mentality) with Morris (a natural scorer), there’s more symbiosis with the rotations. As Stevens suggests, the rotations could be just as fluid as he hopes the ball movement will be and for now, the trends are pointing in the right direction.