Horford not immune to shifting roles

Share All sharing options for: Horford not immune to shifting roles

Throughout Al Horford’s career, the 6’10 forward has been the consummate teammate. He’s patched up his team’s weaknesses, instinctively made smart decisions on offense, and thrived in whatever role he was asked to play. Despite a nagging injury, none of that has changed this year. In his 12th season, Horford still makes the extra pass, punishes mismatches in the post, and anchors an elite defense.

“You know, you take a lot of comfort in having him out of the floor,” Brad Stevens said after Boston’s 119-103 win over the Hornets on Dec. 23, Horford’s first game back from injury.

The difference is that Horford, 32, has never been asked to do less.

Though the $28 million man is a calming presence for the young Celtics, he needs to be more than that. He’s missed nine games and has played with a minutes restriction, but what’s more alarming is his evolving role in the offense as Boston tries to accommodate Gordon Hayward and Kyrie Irving into the fold.

His 18.2 usage rate is the lowest mark in his career since his third season in Atlanta. With a smaller role, Horford’s offensive impact has suffered. His 11.7 points per game is the lowest since his sophomore campaign.

Although his usage is down, he’s launching more threes (4.3 per game) than ever. The uptick in three-pointers could be due to his knee injury — he might be more inclined to hang around the arc than roll through the paint. His offensive passiveness is clear in his career-low 1.1 free throw attempts per game, an embarrassingly low number for a center.

The biggest difference has been Horford’s lack of aggression in the two-man game with Kyrie Irving. Once a lethal weapon, Horford has resorted to popping instead of rolling to the lane too frequently. Oftentimes, opposing centers sag into the paint, hoping to mitigate Irving’s drive. When that happens, it’s the right play to pop to the arc. Against the Heat, Horford made the right read by popping four times, but he missed each shot.

But maybe after missing a couple threes, Horford should roll anyway and test Whiteside, making him choose between stopping a rim-run and defending the ballhandler (Irving).

When defenders show, hedge, or play the pick and roll straight up, Horford needs to slip into the paint more to keep the defense honest, instead of predictably fading to the top of the arc.

How often have you seen Horford make plays like this?

Making aggressive moves and rolling into the paint puts pressure on the defense, and Horford has made a career out of making the right play when the defense converges on him. Even if the lob isn’t there, the short roll might be, and he can facilitate out to the corners from there. Instead, Horford has settled too often for above-the-break threes.

Horford’s tendency to float to the perimeter this season is also evident in his shot profile. He’s taking significantly more straightaway threes as opposed to corner threes and dunks: 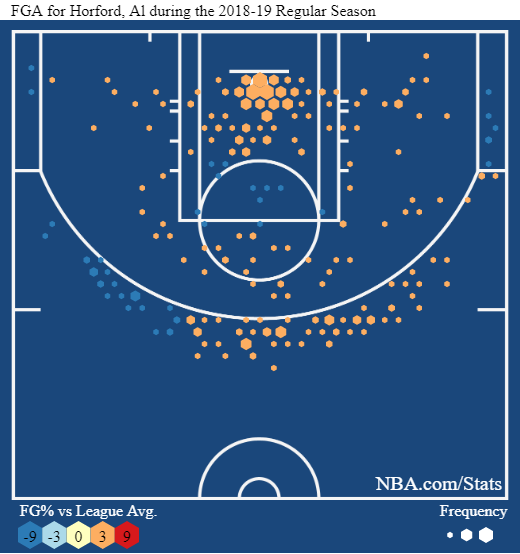 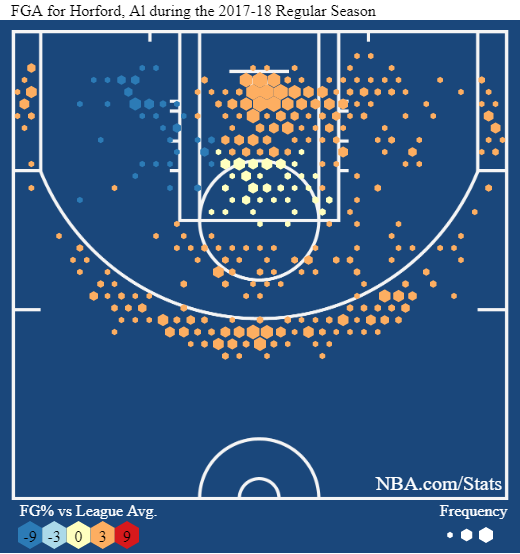 Horford’s only taken seven corner threes this season (2/7). He shot 35 last year at a 52% clip. He takes the vast majority of his triples from the top of the key, where he converts on 38%, still above league average. That’s still an efficient shot for him, but to unlock his playmaking ability and force defenses to help off shooters, Horford needs to roll more.

The Celtics are most effective when Horford is aggressive, looking for his shot and also getting downhill, kicking out to shooters. Even on a team with Irving and Hayward, he’s arguably the best passer. Boston’s 4-2 this year when Horford has more than six assists, with the two losses coming in Toronto and in Denver. Last year, Horford recorded six or more assists 27 times, and they went 21-6.

Big Al’s no slouch. He still anchors the fourth-best defense in the league based on defensive rating. He’s has had success slowing down Karl-Anthony Towns, Marc Gasol and other traditional bigs. But his injury and age have caused him to lose a step laterally, which hurts his ability to contain quick guards on the perimeter in switches. Horford’s only in the 27th percentile in points allowed per possession, by far the lowest of his career, per Cleaning the Glass.

Horford’s knee and role change have reduced his production, but if the Celtics want to achieve their potential, they’ll need him to return to his 2017-18 form — attacking on offense and locking up multiple positions on defense.