As Gordon Hayward recovers on the job, his progress should be judged in the context of his role.

First, let me say this: everything that Greg Brueck-Cassoli says about Gordon Hayward and his current and future status with the team, I agree with. His recovery is going to take time and right now, he’s a shell of the player he was in his All-Star final season in Utah. The explosiveness just isn’t there and it’s unknown whether that’s physical or mental or some combination of both.

However, there’s some context to consider when evaluating Hayward’s progress and maybe more importantly, his role on the roster and whether or not it could change in the future. In Utah, Hayward was the clear cut playmaker on the team; George Hill may have run the point and lead the team in assists, but it was Hayward that was the focal point of the offense.

To some extent, the Jazz ran similar sets for Hayward as the Celtics do now: pick-and-rolls above the break with him working in the mid-range for either the diving big or kick outs to shooters. The big difference is personnel. Since being removed from the starting lineup on November 19th, Hayward has played the bulk of his minutes flanked by Terry Rozier, Jaylen Brown, and Daniel Theis. Together, they’ve shot a respectable 37.9% from behind the arc and boast a positive net rating of 3.8. It’s not bad, but consistency has been an issue with the second unit.

Not a singular player can be blamed for their average performance, but if we’re looking Hayward-specific, consider that when he was in Utah in 2016-2017, he had one of the best rim running bigs in the game in Rudy Gobert and great shooters surrounding him. Of Gordon Hayward’s team-leading 252 assists, Gobert by far was the biggest recipient with 61 assisted buckets. On the perimeter, Joe Ingles turned 27 passes into 23 assisted three pointers at a 42.6% clip. Joe Johnson hit 21-of-43 from behind the arc off Hayward passes. Stevens is fond of talking about Hayward’s ability to spray the ball all over the court and in Utah, he did just that.

In Boston, it just hasn’t been as easy. Rozier and Brown are a combined 23-of-71 from 3 on Hayward passes and Theis just isn’t the target that Gobert is. Hayward has been afforded time with the starters, mainly Kyrie Irving and Jayson Tatum. But as we’ve learned so far this season, the glue guys have been Marcus Smart and Al Horford. It’s not as if Smart or Horford could somehow lift up Hayward’s game, but there is something to be said that Hayward doesn’t benefit from playing as much as say Marcus Morris or Tatum with the team’s assist leaders. 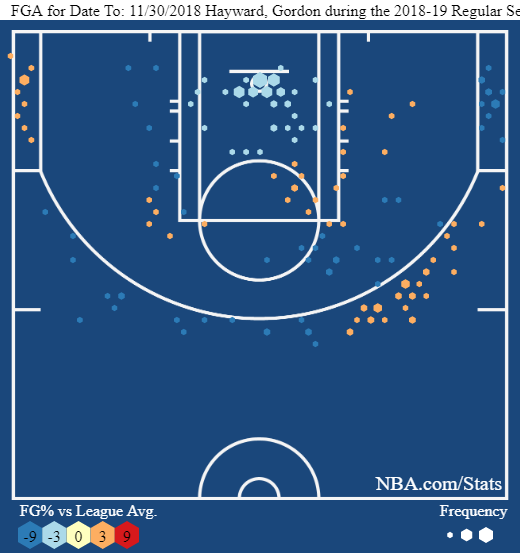 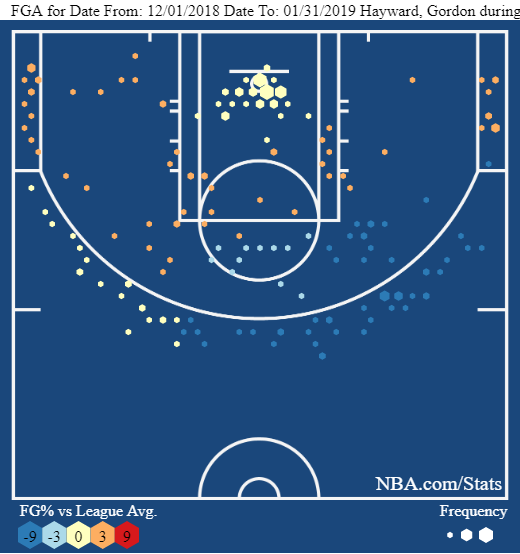 These are Hayward’s hex maps from October to November and December to January. At the start of the year, you can see his difficulty in the restricted area (blue dots near the rim), but over the last six weeks, he’s been able to finish at at least the league average. He’s not throwing down like he did in Utah, but that will come. He’s finding success peppering pull-ups in the paint, but extend that range out a bit and his mid-range game and its frequency are unfortunately going in opposite directions. He’s shooting more 15-footers and making less.

To his credit, Hayward has been steady in his recover. He’s hovered around 25-26 minutes per game all year and his monthly splits show improvement from behind the arc and as a trigger to the offense. He’s averaged nearly five rebounds and four assists per game all year, too. Those aren’t exactly a return to form for Hayward, but it does illustrate the versatility of his game.

Impatient fans like to mention his price tag, but that’s a sunk cost at this point. Plus, it’s only January. Hayward is still a work in progress, and frankly, so is the team. In a way, Hayward is a microcosm of the Celtics: we’ve seen how good he can be and what really matters is where he’s at in April.