Finding a role for Semi Ojeleye

Often the forgotten man on last season’s bench, Semi Ojeleye may still have a complicated path to minutes in 2019-20.

Share All sharing options for: Finding a role for Semi Ojeleye

Last season’s Boston Celtics were a team suffering from excess. They were a team with a truckload of talent, but never quite found a way to coexist and ultimately collapsed under the weight of their own significant expectations. While the team’s substantial roster crunch caused a plethora of very prominent issues, one player struggled through his own lack of opportunity in relative obscurity: Semi Ojeleye.

The same injury that brought Ojeleye an opportunity to establish himself as an NBA talent in his first season ultimately took away those opportunities in his second. Gordon Hayward’s return to the Celtics lineup essentially capped out their ability to play any more wings: behind Hayward, Jayson Tatum, Jaylen Brown and Marcus Morris, there just wasn’t an opportunity for Ojeleye to crack the rotation. After playing 1,380 minutes between the regular season and playoffs as a rookie, his playing time was cut by more than half. Functionally, he became an invisible man.

In discussing the team’s bench depth with the Boston Herald last Thursday, Brad Stevens cited Ojeleye by name as an example of someone who has had to adapt to such inconsistent opportunities.

“It’s not fun, it’s not an enjoyable part of the job, but the challenge is being great at it. I’ve said this many times, and I’ve singled out (Brad) Wanamaker quite a bit last year, and I singled out (Semi) Ojeleye quite a bit because those guys can do that — not saying they will this year, just saying they have in the past,” said Stevens.

“That is a special ability, probably a lot harder than being a guy whose name gets called every night in the starting lineup. It’s the guy who doesn’t play consistent minutes and may have a 20-minute game and may have a zero-minute game. Those are the most challenging minutes on the team.”

Now, Ojeleye has a chance to carve out a bigger piece of the pie. Though Tatum, Hayward and Brown should still soak up most of the wing minutes, the departure of Morris leaves the Celtics thinner than you might think in the way of reserves. At the moment, just Ojeyele, rookie Romeo Langford and newly minuted 15th man Javonte Green fill out the bench. Ojeleye is the team’s best option perhaps by default, and he should have every opportunity to secure a spot in the nightly rotation.

The good news is that Ojeleye’s brief cameo appearances offered some encouraging signs of growth. With the obvious caveat that he spent most of his minutes matched up against deep-bench reserves — his best games of the season came in the 56-point demolition of Chicago and Game 82 against a hapless Wizards team — Ojeleye improved in almost every statistical category. He looked far more certain in his offensive role, especially at the rim, where he shot nearly 70% — a 20-point improvement on his rookie year. Even more encouraging was Ojeleye’s more active participation in the Celtics offense: per 36 minutes, he took nearly twice as many shots as he did the year before. 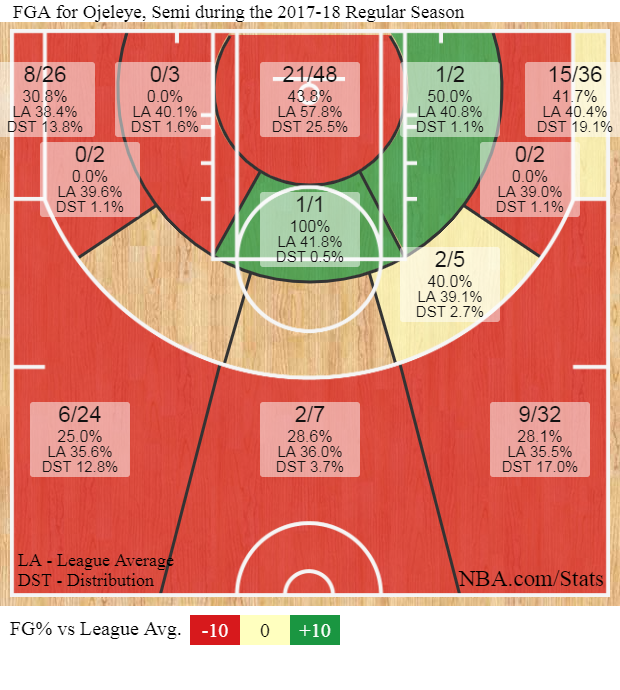 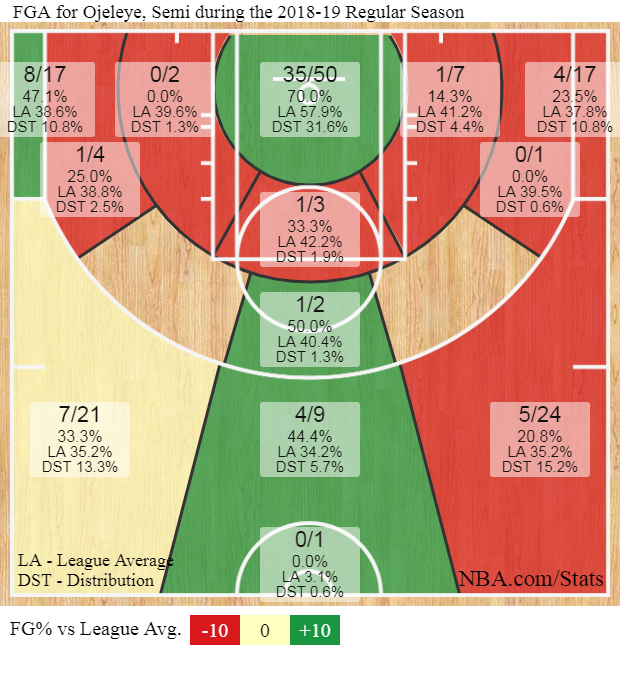 The problem is that, even as much as he visibly improved in his second season, Ojeleye still wasn’t particularly effective on the offensive end of the floor. While his jumper looked a fair bit less erratic than it has in the past, he still shot just 33% on catch-and-shoot jumpers, which would stand to be his primary offensive role during his time on the floor. If this was his performance against the bottom of opponents’ benches, he still has a sizable amount of improvement ahead of him if he’s going to contribute in competitive situations.

Complicating things further are the two very dissimilar rookies who could cut into Ojeleye’s minutes: Grant Williams and Romeo Langford.

A three-year starter at Tennessee, Williams is perhaps the most NBA-ready player in Boston’s draft class. His fit in the Celtics’ offense already appears snug: he’s a smart passer, a willing screener and showcased a promising jumper throughout the offseason. What’s more, with his strength and basketball IQ, he might already be a superior defender in the frontcourt to Ojeleye. Williams can’t play on the wing, but he could be a safe bet to vulture most of Ojeleye’s opportunities at the four as the season goes on.

Langford, meanwhile, is an unknown factor, considering he’s barely played basketball since the Celtics’ made him their first pick of the NBA Draft this summer. He’s practically been cursed. He missed all of Summer League as he recovered from surgery on the thumb injury that plagued him through his lone season at Indiana, and sat out training camp due to a strained groin. After finally making his debut with the team in their second preseason game, he found himself shelved once again just a game later with a sprained knee.

Considering this utter lack of productive court time, it’s safe to suggest Langford won’t factor into the rotation early in the season. He might even be ticketed for some time in the G-League. If he can stay healthy going forward and returns to game shape, though, it’s possible he could work his way into the rotation later in the year. He was the 14th pick in the Draft for a reason, after all: he’s a dynamic athlete and versatile scorer, perhaps already one of the best players on the team at getting to the rim. At some point, Langford is going to get a look, and if Ojeleye can’t cut it as a scorer, he could have a hard time fending him off.

These are the shifting sands upon which Ojeleye’s playing time rests. He enters the season as the top forward option off the bench almost by default, but where he goes from there could be anyone’s guess. If he shows serious growth as an offensive threat, he could grow into a similar hybrid forward role to the one occupied by Morris last season. At the same time, if he doesn’t progress, he could find his opportunities starting to erode at the hands of the Celtics’ new faces. It’s up to the 25-year-old to determine which possibility comes to pass.