Marcus Smart is under control

Marcus Smart is having the best shooting season of his career, thanks to a newly restrained offensive approach.

Share All sharing options for: Marcus Smart is under control

The Boston Celtics defeated the Cleveland Cavaliers on Tuesday 103-96, in a game that typically does not merit much analysis of any particular depth. The Celtics were without Kyrie Irving, Marcus Morris and Aron Baynes for the evening while the already-bottom-dwelling Cavaliers went without roughly half their normal roster, and while it wasn’t a particularly exciting performance, the Celtics did enough to win their 11th game in their last 12 outings.

Still, there’s plenty to discuss from even less-riveting wins like this one. Tonight, one such point of discussion happened to be Marcus Smart and his continued growth on the offensive end of the floor.

The first facet of this is the most obvious: Marcus Smart is finally hitting threes. The owner of one of the worst high-volume three-point shooting seasons of all time (a Westbrookian 25% on four attempts per game in 2015-16) is suddenly shooting 37.7% from behind the arc this year. Celtics fans’ longstanding hypotheticals of “if only he could shoot” are suddenly coming true, and he’s out-shooting contemporaries like Kawhi Leonard (37.1%) and Jimmy Butler (37.5%) by a narrow degree thus far, on similar volume.

The driving force behind this improvement isn’t hard to trace. Smart has built a reputation for being a fearless gunner from behind the arc, but this season, he’s basically just stopped taking bad shots. A whopping 61% of his total shot attempts have been classified as “open” or “wide open” threes by NBA Stats, up from 41.5% last season. Last year, 7.4% of his shots were recorded as tightly contested threes; this year, that number has dwindled all the way down to just 2.6%.

A significant factor behind Smart’s improved shot quality has been an increased emphasis on catch-and-shoot attempts. Nearly 46% of his total shot attempts have been catch-and-shoot threes, up from 34% last year. Off the ball, Smart is finding space better than ever, and being surrounded by playmakers like Kyrie Irving and Al Horford in the starting lineup affords him no shortage of quality looks.

His improvement from range has (rightfully) garnered the most attention, but Smart has also showed serious maturation inside the arc. He’s essentially become the league’s most unlikely Moreyball-style player, virtually eliminating mid-range jumpers from his repertoire in favor of more threes and layups. Though he’s still far from an elite finisher, he’s clawed his way to a near-average 50% mark from within 10 feet. Smart is able to slither into the paint through traffic with more subtlety than you might expect from a player with his bulldog reputation, and he’s a crafty finisher when he gets there.

These refinements stack neatly on top of Smart’s existing offensive skills. One improvement we’ve already observed in years past has been his capability as a playmaker. Smart’s assist rate jumped from 15.8% in 2015-16 to 22% in 2016-17, and he’s never really looked back. He’s grown into one of the most reliable initiators on the team, and it feels like he showcases that skill night in and night out.

Now, Smart’s improved scoring has opened up some intriguing opportunities for offensive creativity. He’s always drawn some attention from defenses behind the arc, if just for sheer volume, but now that he’s canning threes at an above average rate, that attention has become a little more aggressive. This is a development that has made Smart just a little bit more dangerous in half-court situations, because he’s well-equipped to exploit more attention.

In all, comparing Smart’s shot charts from this season and last paints a striking picture. 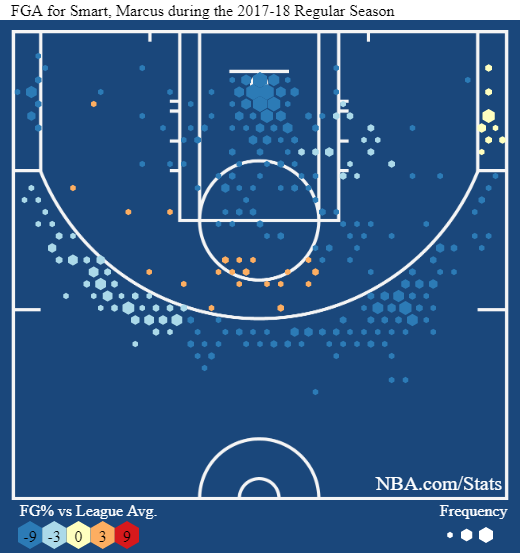 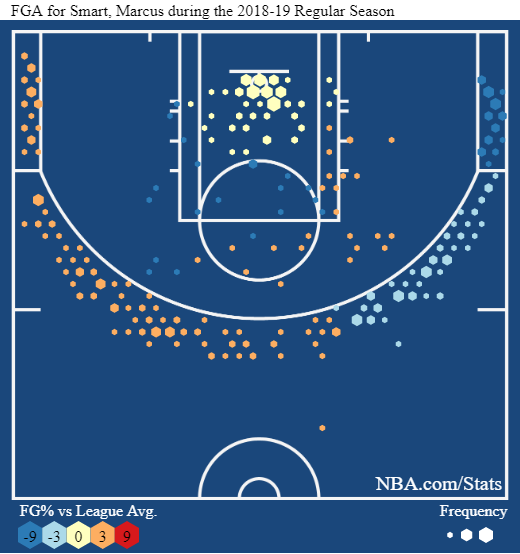 Now, it’s important to keep this all in context. We’re talking about a sample of just 223 three-point attempts at an above-average rate across 53 games, compared to 1094 attempts as one of the worst in the league in the 261 games before. There’s still a long way to go before this can confidently be considered sustainable, and expecting him to flirt with 40% shooting from deep next season remains highly irrational.

Still, the Celtics have to be happy with this latest edition of Marcus Smart, and if it he does manage to sustain it, his $52 million contract — which already looked like good value to being with — could evolve into one of the best contracts in the entire league.