The Celtics are about to face a vastly different Bucks team than the one they defeated in the first round last season.

Share All sharing options for: Meet the new Milwaukee Bucks

Last April, the Boston Celtics’ seven-game triumph over the Milwaukee Bucks in the first round of the NBA Playoffs was something of a landmark occasion for the franchise. After several rudderless weeks of basketball without the two players that were supposed to be carrying them to the promised land — Kyrie Irving and Gordon Hayward — many felt the Celtics were dead in the water, destined to fall to the Bucks and their rising superstar, Giannis Antetokounmpo.

As you know, that didn’t happen. The Celtics conquered the Bucks behind the play of youngsters like Jayson Tatum, Jaylen Brown and Terry Rozier, and launched one of the most improbable playoff runs in NBA history. It all started with that series, so it feels fitting that, in the midst of another potentially franchise-defining playoff run, the Celtics would face the Milwaukee once again.

It’s easy to build a case for the Celtics in this series based on the simple fact that Irving and Hayward are both back and healthy. Adding two All-Stars with playoff pedigrees to an Eastern Conference Finals team is a very conspicuous kind of improvement, and its been the justification for most of the people picking the Celtics to win this series.

Don’t be fooled by the Bucks’ familiarity, however. They may look like the team the Celtics defeated last season, but in truth, they’ve evolved nearly as much as Boston has. They’ve grown from a plucky seven seed to the most dominant team in basketball. The cases you can make for Boston are valid, and picking a true favorite in this series is uniquely difficult, but it’s worth taking a look into some of the changes that turned the Bucks into the team they are now.

When discussing the Bucks’ improvement from last season to now, the conversation has to begin on the sidelines. Budenholzer is one of the league’s most respected basketball minds, a Popovich disciple who worked as a Spurs assistant for 17 seasons, and the architect of the remarkable 60-win Hawks in 2014-15. Replacing the inept Jason Kidd/Joe Prunty duo of last season with the brain behind “Hawks University” is one of the most substantial coaching upgrades we’ve seen in recent years.

Coach Bud’s fingerprints are all over Milwaukee’s breakout year — check out the contrast in their shot selection between last season and this one. 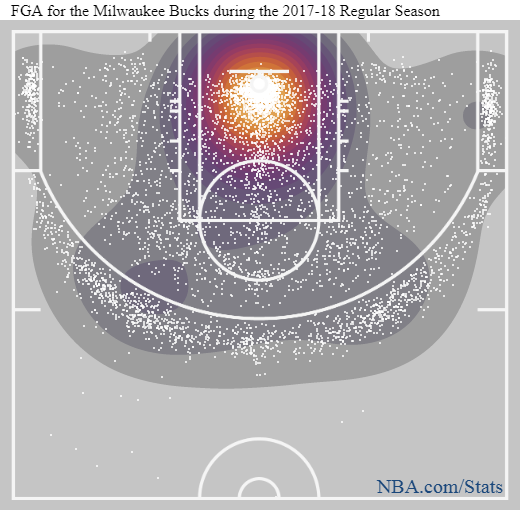 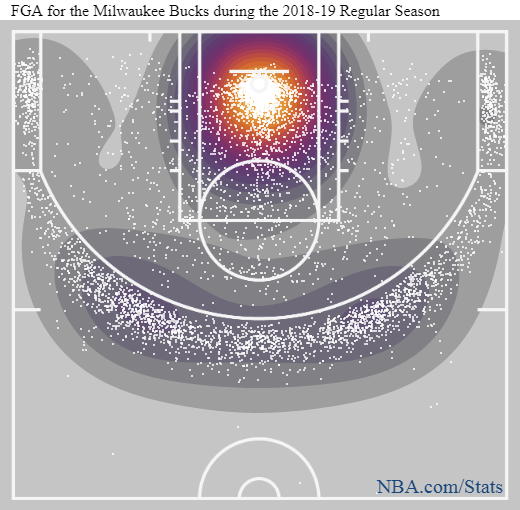 In other words, plays that looked like this last season...

What’s more, Budenholzer has the Bucks playing more disciplined defense than we’ve seen from the franchise in the Giannis era. The Greek Freak is the main display, of course — a frightening combination of inconceivable athleticism and limbs that never seem to end — but the Milwaukee defense is remarkably strong throughout the roster. Eric Bledsoe has been a top-five guard on the defensive end this season, Brook Lopez has been a terror in the paint as a rim protector, and even youngsters like Sterling Brown and DJ Wilson have found ways to contribute.

The Bucks have weaknesses, yes — Nikola Mirotic and Ersan Ilyasova are particularly exploitable — but arguably no team in the league has done a better job covering their holes this season than Milwaukee. That’s the Mike Budenholzer effect.

Last season, the Bucks couldn’t — and didn’t — shoot. They ranked in the bottom third of the NBA in both three-point attempts (15.5, 24th) and percentage (34.9%, 21st), and generally just lacked the personnel to force defenses to respect them behind the arc. They were thunderously dominant at the rim and in transition, but without many notable three-point specialists, defenses could get away with stacking the paint in front of Antetokounmpo. Boston would execute that exact scheme to devastating effect in last year’s first round.

The Celtics won’t enjoy that luxury this time around. The Bucks’ improved ball movement has come with a newfound willingness to shoot the three. Milwaukee’s three-point percentage may not stand out — they’ve hit 35.3% of them, 15th-best in the league — but only the Rockets have been more willing to let it fly more often than they have. They’re taking a whopping 38.2 attempts from deep per game. Defenses can’t collapse into the paint because the players on the perimeter have the green light to shoot with any amount of open space.

Lopez has become particularly shameless in his shot selection, launching high-arcing bombs from just about anywhere on the court if he sees an opening. Remember when this guy was purely a low-post specialist?

It helps that, unlike last year, Milwaukee now has a cadre of confident and effective three-point threats. Perimeter shooting was obviously an organizational focus this off season, and in signing Lopez and Ilyasova (and trading for Mirotic at the deadline), they’ve filled that need in significant fashion. Throw in the growth of Brown and Wilson into reasonably effective shooters in their own right, and the continued presence of Tony Snell and (eventually) Malcolm Brogdon, and the Bucks can surround Antetokounmpo, Middleton and Bledsoe with quality three-point shooters at all times. If George Hill finally finds his shooting stroke, things could get flat-out silly. The contrast to last season, where they essentially only had Brogdon and Snell, is dramatic.

The enduring memory of the Celtics’ first round victory over Milwaukee last season was Terry Rozier’s feud with — and dominance over — “Drew” Bledsoe, who struggled to the tune of a mere 51.2% true shooting percentage in the series. Bledsoe was clearly out of his comfort zone all series long. His downhill attacking style of play largely was stymied by Boston’s ability to clutter the paint — all while Rozier turned him into mincemeat at every possible opportunity.

Fortunes have since changed for both players and rather drastically. Rozier has largely failed to recapture any of his post season magic, while Bledsoe has thrived under Budenholzer’s guidance, putting together perhaps the best season of his nine-year NBA career. Despite connecting on just 32.9% of his threes, Bledsoe has posted the best effective field goal percentage (54.8%) of his career. He’s finishing at the rim at a rate that is borderline inconceivable for a 6’1” point guard, a blistering 73.6%.

Remember when people called him “Mini LeBron?” It was because of stuff like this.

Last season, it felt as though the Bucks went out and traded for Bledsoe because just he was an established name, and never put much thought into how to incorporate him into their roster. Bledsoe’s a weird point guard, he doesn’t just plug-and-play in most schemes; you have to tailor your plan around him. Budenholzer has done that, and Bledsoe has rewarded him with one of the best redemption stories in basketball. Only seven point guards in the NBA posted a higher RPM than Bledsoe’s +3.61 this season.

Lopez, Ilyasova and Mirotic were big additions, but Bledsoe’s improved play has been even bigger. Last April, Antetokounmpo and Middleton were basically able to shred the Celtics at will, but things fell apart because Boston was able to shut everyone else down. Bledsoe has changed that equation entirely, and he’s one of the biggest reasons why these Bucks will be a vastly different challenge for the Celtics this time around.