The late John Havlicek was known for his constant motion on the floor. He was part ballerina, part energy bunny. He ran defenders ragged and could pull up from anywhere and at anytime. He played in an era without advanced analytics and retired a season before the three-point line was implemented in the NBA. There wasn’t as much conversation surrounding what was a “good shot.” The good ones went in. The bad ones didn’t.

Thirty years later, the modern NBA has redefined shot efficiency and produced some quirky results (and those quirky results have produced championships contenders). Shot economists have polarized how teams consider their shot selection. If shots are in the restricted area or behind the arc, they’re ill-advised. Taking long-2’s are frowned upon like eating supermarket sushi.

But none of this seemed to matter in the Celtics’ 112-90 blowout of the Bucks in Game 1 on Sunday afternoon.

During the regular season, the Celtics were sixth in the league at mid-range shots at 18.8 FGA per game, behind teams like the San Antonio Spurs (ahem, DeMar DeRozan), Golden State Warriors, and their first round opponent, Indiana Pacers. And for most of those 82 games, most fans lamented those 15-footers. Jayson Tatum’s Kobe impression early in the season or Marcus Morris running cold after the All-Star break were flagged as settling and inefficient.

Fast forward to the playoffs and Boston’s second round match up with the Milwaukee Bucks and the Celtics’ penchant to run their offense around the free throw line could be their saving grace in beating the overall #1 seed in the post season. As CelticsBlog’s Keith Smith put it, “you attack MIL in the mid-range & above the break. That’s where BOS lives on offense.”

As if basketball was played on a spreadsheet, the Bucks constructed a defense that gave up the fewest shot attempts in the restricted area and the most three-pointers in the NBA. Milwaukee had the lowest defensive rating in the regular season (104.9) because they forced opposing teams to take “bad shots.”

On one hand, you have to take what defenses give you. There’s a pick-your-poison element in trying to scheme against the best teams in the NBA, but in Game 1, the Celtics showed why their depth and versatility makes them so dangerous in the playoffs. They may not have the shot-making prowess of the Warriors or a freak of nature like The Greek Freak, but they do have a lot of guys that can do a lot of things, one of which is make those mid-range gimmes.

Marcus Morris, Gordon Hayward, and Jaylen Brown combined for 8-for-10 between the restricted area and the arc. They may not be that hot again, but the sheer threat of them being able to get that hot keeps the Bucks’ defense on tilt and that’s the key to Boston’s read-and-react offense: whatever the defense gives you, you take it.

To wit, per Second Spectrum, the Celtics made 28 of their 52 uncontested shots; the Bucks hit 18 of 50. If you’re a Milwaukee fan, you think, “that’s the game right there.” But again, Boston is taking the shots that Milwaukee is giving them. For example, Horford was the biggest beneficiary of the Bucks’ drop down defense. Playoff Al took 13 uncontested shots, more than any of his teammates, with most of them coming off pick-and-pop actions with Kyrie Irving and Gordon Hayward.

The Bucks didn’t play bad defense. They played Bucks defense. The Celtics had only 19 field goal attempts in the restricted area, but feasted in the mid-range. Here are the shot charts for the Bucks and Celtics from Sunday afternoon: 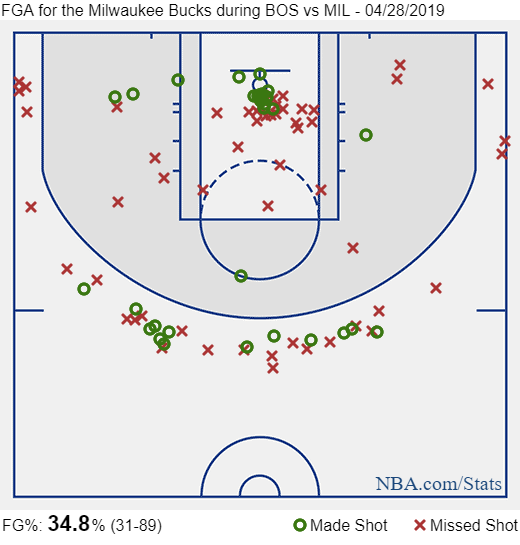 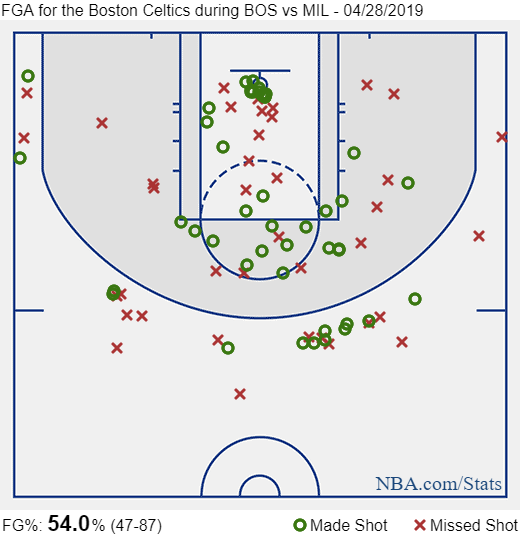 Asked Bud this question: "Every coach will tinker and make adjustments throughout the playoffs, but talking with Brook (Lopez), it sounded like the message was largely 'Be you, but just be better at being you." Has that largely been the message in the last day?"

Antetokounmpo echoed those sentiments, confidently saying, “We’re just going to keep doing what we’ve been doing all year. I don’t think we should change at all. Why should there be a change after a game that we lost? We should not be the team that made the adjustment.”

To some extent, they’re right. They were the only team to win 60 games in the regular season and swept through the first round against the Pistons. And their analytics department isn’t wrong. The Celtics just made a lot of shots against the best defensive team in the regular season. We’ll see if the math shakes out for Milwaukee in Game 2 or the Celtics can channel more of that Hondo mojo.