Pick-and-roll discipline could be key in Celtics-Pacers series

Share All sharing options for: Pick-and-roll discipline could be key in Celtics-Pacers series

What a difference a week makes. Two Fridays ago, the Celtics squared off with the Pacers and won in the Garden 114-112. Indiana was on fire. They hit 12-of-27 from behind the arc and punished Boston on the glass with 14 offensive rebounds for 20 second chance points. Seven days later in Bankers Life Field House, the Celtics’ defense clamped down and held the Pacers to under 100 points.

That two-game set is a good precursor to how the Celtics will deal with Indiana’s offensive attack. The Pacers are a mediocre offense that caters to their biggest strength: their front court. Without Victor Oladipo, Indiana has relied on their bigs heavily. They’re first in frequency in hitting the roll man on the pick-and-roll and run a lot of action off their 4’s and 5’s (8th in the league in front court touches and 5th in elbow touches).

@Scalabrine explains why he wanted the Celtics to face the #Pacers in the first round of the playoffs pic.twitter.com/vYcdi681FX

Their Achilles heel is how much they shoot from around fifteen feet. In the modern NBA, the mid-range shot has become taboo, but Indiana didn’t get the memo. They’re third in the league in mid-range field goal attempts and shoot an inefficient 40.5%. Here’s Indiana’s shot chart in Boston: 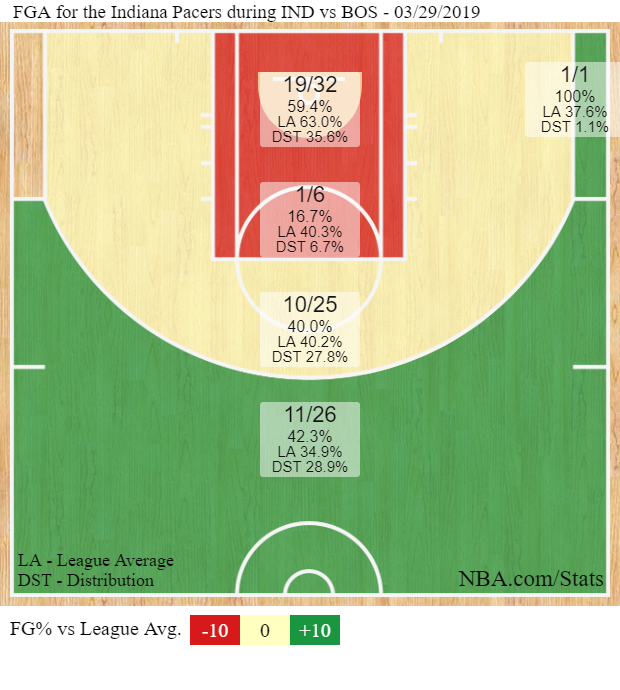 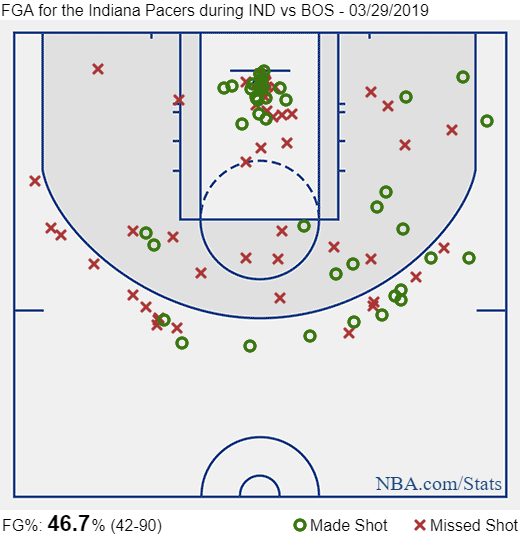 And here’s how they fared at home: 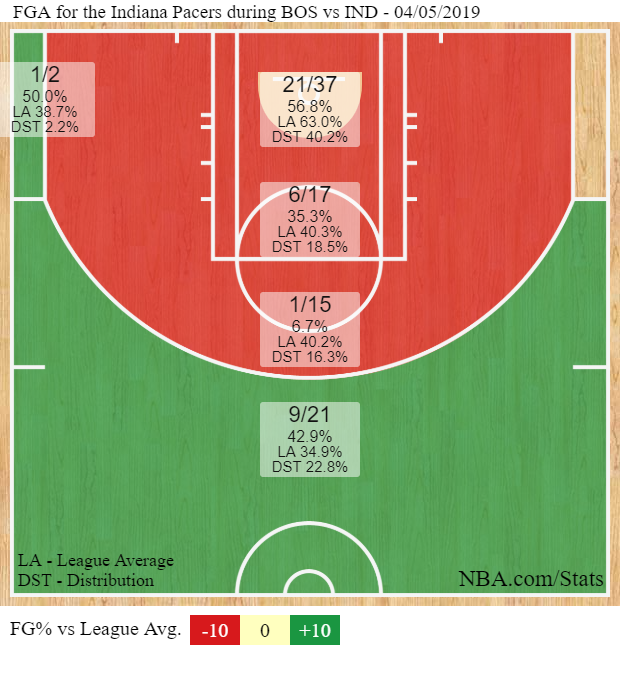 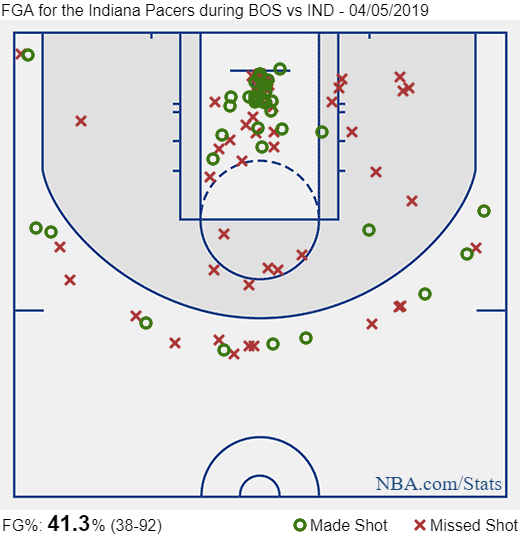 The most glaring difference between both games is Indiana’s success in that mid-range. On March 29th, they were 10-for-25 shooting between the paint and the three-point line; last Friday, they struggled and hit just 1 out of 15. Many of those attempts turned into paint looks outside of the restricted area, but with the Celtics packing in the key so much, closer didn’t necessarily mean better.

Much of Boston’s success on Friday stems from their PnR defense. Here’s the Celtics’ typical ICE D:

Aron Baynes backs up way into the paint, ready for a Corey Joseph drive or Thaddeus Young roll. He’s inviting a 15-footer. The Pacers don’t take the bait. Young catches the ball with two feet in the key, but Baynes closes strong and contests his hook shot.

Here’s another good example from Baynes. Again, notice how far Baynes is in the paint. He’ll give Bojan Bogdanovich the jumper and Bogdanovich rushes a shot while Kyrie Irving recovers.

Another textbook example from Baynes. He gives himself plenty of room to square his feet and absorb the Young drive. Young can’t get his shoulders around Baynes and it’s another out of control flip shot that Baynes gets a piece of.

As Brian Scalabrine noted above, the Pacers don’t have a single player that can kill you like an Oladipo or Irving, but if you take bad angles when they’re coming downhill, they’ll make you pay. The usually solid Horford lets Domantas Sabonis to get around him on the roll with a clear path to the rim.

Horford again takes a difficult position on the pick-and-roll. Remember how far back Baynes set up to defend the drive/roll? Horford is practically at the arc. Joseph easily drives passed him for the lay up.

Where the Celtics can also get in trouble is gambling and not being disciplined with the defense. Irving tries to read Joseph’s eyes and prevent the rotation, but Wesley Matthews cuts back door and scores on an uncontested lay up. Gordon Hayward had already recovered from the screen and Al Horford was covering the kick out.

Pick-and-rolls are just one element of Indiana’s offense. It’s basketball’s bread-and-butter play. In a seven-game series, Boston will seen over a hundred actions against the PnR. The Celtics are third in the league against ball handers (0.80 points per possession), but 17th in defending roll men at 1.13 points per possession. The Pacers are 27th in pick-and-rolls as a ball handler and 28th as roll men. On the page, Boston should win this part of the match up, but games aren’t played on paper. Indiana is a gritty, tough, and veteran-laden squad that have found ways to win all year.