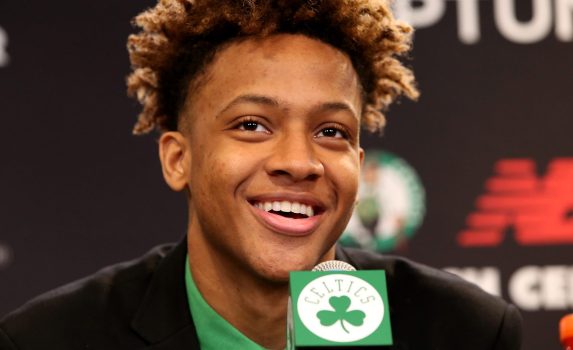 Hey there Celticsblog! Since it's officially the doldrums of August and NBA content is sparse these days (yay for the schedule release!) I figured we could take a more in depth look at the prospect Boston selected #14 overall in the 2019 NBA Draft, Romeo Langford.

Unlike his fellow rookies, Grant Williams, Carsen Edwards, Tremont Waters, or even roster hopeful (and fan favorite) Tacko Fall, Langford was unable to play in the 2019 NBA Summer League. The Celtics wanted to give their lottery pick plenty of time to recover after having thumb surgery on his shooting (right) hand.

Summer League is great for a variety of reasons, but most importantly it gives fans a sneak preview of what they can expect from young players on their favorite team's roster. Furthermore, watching certain players get numerous reps in Las Vegas against NBA-caliber talent often gives us a glimpse as to their potential role in the Association.

Based on what we saw in Summer League, we can roughly assume that the Celtics rookie's roles will be something like:

Now comes the man of mystery, Romeo Langford. To shed some light on the 19 year old out of Indiana University, let's begin by examining his physical profile and skillset before we consider his weaknesses.

Standing 6'6 weighing 215 pounds with a 6'11 wingspan and 8'7 standing reach Langford has good size for a NBA guard. He is a smooth athlete who jumps well off of one or two feet and plays with a low center of gravity. With his strong body and wiry frame he has the athleticism to potentially be a versatile defender.

Langford was at his best as the primary scorer at Indiana. Although he was plagued by a thumb injury on his shooting hand, that did not stop him from getting buckets. He led his team in scoring at 16.5 PPG, however he struggled shooting the ball (45% from the field, 27% from deep). Multiple scouts believe Langford's shooting woes were partly due to his thumb injury. Regardless, he was clearly most comfortable with the ball in his hands.

According to ESPN's Mike Schmitz Langford ran the pick & roll for 26% of his offense, where he would often use his natural touch and a variety of step-back moves to get a shot for himself or his teammates. He was typically strong and fast enough to get by his man while utilizing ball screens, and when bigs switched onto him he punished them in isolation.

Langford also excelled out of isolation. He really loves to play out of the triple threat position, play off of his jab step to freeze defenders, and set them up for step-backs and pull-ups. He is also partial to using the rip-through move to blow by his defenders, and is adept at rejecting a ball-screen with a rip-through when isolated at the elbow or wing.

The following video highlights some of Langford's offensive capabilities.

If it isn't obvious by now, Langford was drafted based on his potential offense, not necessarily his defense. While he does possess good size and athleticism, scouts have questions about Langford's toughness. While at Indiana he let players of similar stature bully him physically, and displayed bad habits such as "dying" or getting caught on ball screens as well as jogging back on defense after turnovers. If he can increase his defensive IQ and effort level, at best he is a three position (1-3) defender.

The main criticism for Langford at this stage is his inability to play off the ball. While at Indiana he showcased poor off-ball instincts, rarely cut, often seemed out of position or disengaged, and struggled with catch and shoot as well as spot-up opportunities.

Furthermore, some who have watched Langford are skeptical about his ability to run an offense. His decision making at times is questionable and he is prone to tunnel vision. His love for triple threat isolation offense and jab steps can disengage his teammates and be infuriating to those who were not fans of Carmelo Anthony.

Now that we have a baseline understanding of the former 5-star recruit, lets discuss how he fits into the Celtics rotation. As we know, Coach Brad Stevens visualizes his roster in terms of 3 positions:

The big question for Langford is where will his minutes come from and how can he positively contribute to this roster. The Celtics have a multitude of options for their backup ball-handler, and while Wannamaker is familiar with the system and Smart is more than capable of orchestrating the offense as a lead guard, I believe it would benefit Boston to allow Langford some time to develop as an offensive creator.

As we saw in Summer League, Edwards has the ability to shoot the lights out, however he seems to be more comfortable as a scorer rather than the one initiating the offense with the ball in his hands. This is where I think pairing Langford with Edwards could be beneficial, as Langford could use his natural talents to set up his teammates for easy baskets.

Overall I believe that with proper development Langford could pick up some shot creation responsibilities that will be needed after the departure of players such as Terry Rozier and Marcus Morris. As we saw last year with Hayward (and in past seasons Evan Turner), having a player with size and ball-handling ability that can come off the bench and generate good looks is a valuable weapon for Coach Stevens to have at his disposal.

So what do you think Celtics fans? How will Romeo Langford fit in with the Celtics this season?

What will Romeo Langford's role be this season?