Tatum as Pierce, planning on Banner 18, and winning now with Walker and Hayward

Back to the future.

Share All sharing options for: Tatum as Pierce, planning on Banner 18, and winning now with Walker and Hayward

Danny Ainge has been here before. Bowing out in the Eastern Conference Finals. Two young superstars in tow. Another crossroads of an offseason. This is a familiar path.

When Ainge first became Boston’s president of basketball operations in 2003, he took over a Celtics roster that had lost a six-game series to the New Jersey Nets and were swept by the same team a year later. The talent pool had been whittled down by a series of impatient deals. Rick Pitino had dealt an underperforming Chauncey Billups in his rookie season for Kenny Anderson. Chris Wallace gave up on Joe Johnson in favor of vet help from Tony Delk and Rodney Rogers. However, Boston was led by a 25-year-old Paul Pierce and a 26-year-old Antoine Walker, a pair of young All-Stars who could seemingly be the foundation of the franchise for the future.

And then Trader Danny went to work.

Ainge naturally built around Pierce. The Celtics second all-time leading scorer had just had his second All-Star season and tallied the most points in the league in 2002. But through a byzantine series of trades and draft picks, Ainge would zigzag his way through the next four seasons, recycling role player after role player until something stuck. Nothing ever did. He immediately recognized the ill fit with Walker and dealt him to Dallas. Ricky Davis, Raef LaFrentz, Antoine Walker again, Tom Guggliota, Wally Szczerbiak, and a slew of failed trade acquisitions all walked through that door and walked right back out.

Quietly though, he built through the draft, a skill I frankly don’t think he gets enough credit for. In four consecutive summers, Ainge amassed Kendrick Perkins (#27), Tony Allen (#25), Rajon Rondo (#21), Leon Powe (#49), and Glen Davis (#35). All those players would become the young supporting cast of the Big Three. 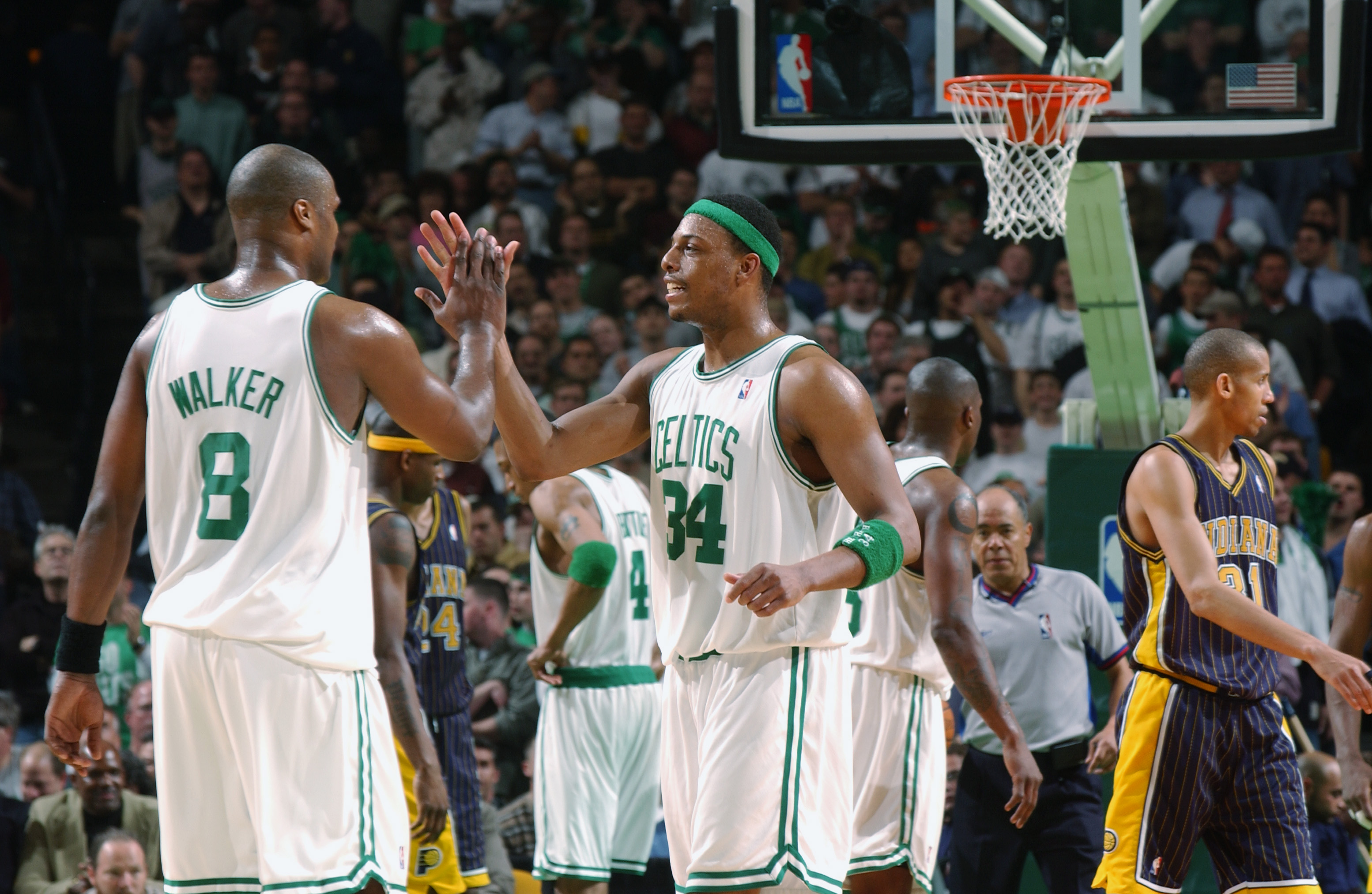 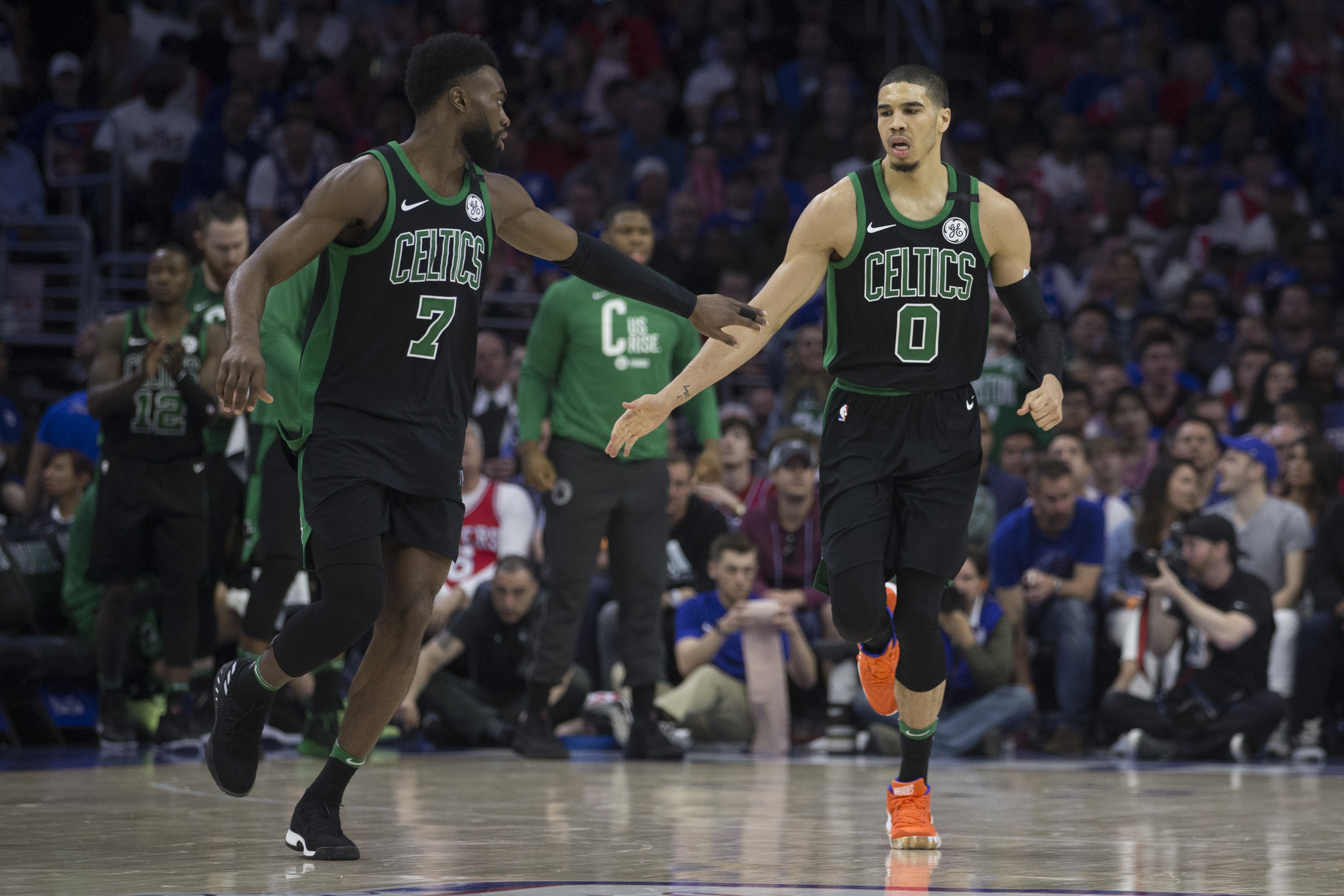 To some extent, he’s already ahead of the game. Instead of Pierce and Walker, the Celtics have Jayson Tatum and Jaylen Brown as their cornerstones. With the league emphasizing wing play, potentially having two of the most dynamic young swingmen under contract--Brown is discounted at $26.7 million AAV--is a boon for the franchise’s future. Had Pierce and Walker been around today, pairing them in today’s NBA might have been equally advantageous, especially had former commissioner David Stern implemented 4-pointers.

Ainge also presumably has his coach in place with Brad Stevens, has had him in place for a long time, and will have him in place for the foreseeable future. Stevens signed an undisclosed extension before heading into the bubble this summer. Back in 2004, he saw a similar opportunity when Doc Rivers was fired by the Orlando Magic and snapped him up five months later. As my colleague Jeremy Stevens has alluded to, continuity is key and things seem set at least at the top end of the team with a young (but experienced) head coach with two franchise players in the fray.

The curious decision that Ainge does have to make this summer is whether or not he commits to the current youth movement. Can players like Grant Williams, Robert Williams, Romeo Langford, and whoever he picks in next month’s draft be the complementary pieces to a win-now contender? The salary cap math and the restrictions that come with it might dictate his actions more than how he projects the development of his bench, but it’s certainly something to keep an eye on over the next two months.

When Ainge built out the bench in 2007, he had Rondo, Perkins, TA, Big Baby, and Powe to supplement the older roster, but he also retrofitted it with veterans like James Posey and Eddie House (and later, Sam Cassell and P.J. Brown) that were closer to the Big Three’s age profile. With 2020-2021 in mind as well as the next 3-5 years, Danny could embrace the youthful energy and chemistry and continue to build from the ground up rather than be a destination for aging ring chasers. I’ve made the argument countless times that he should (see below).

The Leap: projecting Langford and the Williamses as Avery Bradley, Draymond Green, and Clint Capella

There’s also the two veteran All-Stars to consider. Kemba Walker still has three more years on the max contract he signed last summer. Odds are, he’s not going anywhere in the near future. The circumstances around Hayward are far different. On one hand, he had arguably his most efficient season of his career last year and the Celtics are better with him on the floor. On the other, if he picks up his option, he plays in the same space on the floor as Tatum and Brown and it could make financial and schematic sense to move him for more compatible pieces. We’ve covered it ad nauseum here at CelticsBlog, but if there’s a takeaway looking at Ainge’s transactional history in totality, it’s that he’s willing to do anything.

Ainge has rebuilt the Celtics twice, once when he started from scratch and built around Paul Pierce, again when he traded Pierce and Kevin Garnett to Brooklyn, and most recently when he lost two big free agents, Kyrie Irving and Al Horford, to free agency. If he’s confident with what he has, he can tinker around the edges in the hope that he’s a minor move or two away from raising Banner 18, but if he’s not, Ainge has never been shy about swinging the sledgehammer.

The one consideration Ainge might make is what Jayson Tatum thinks. In this climate of player empowerment, he could cater to and consult with a player that many believe will be a top-5 superstar very soon. With Tatum’s max extension still unsigned, does Danny take Jayson aside, treat him like a franchise player on the level of LeBron James, and talk to him about current moves and future planning?

Back in 2007, A 17-game losing streak was discouraging enough for Pierce to consider a trade demand.

“It was just discouraging,” Pierce explained to Sports Illustrated’s Chris Mannix. “It was just like I want people to know who Paul Pierce is, what type of player he is, but the only way to do that is to be on the big stage, be in the playoffs with a shot at the championship. It was discouraging playing so well and not reaching the team success that I wanted to reach. Because at the end of the day, that’s how you’re going to be measured on how your team does more than what you do as an individual. When I didn’t see that, the results of that, it created doubts where maybe I could go somewhere else and find that.”

Instead, that summer, Ainge pushed his chips in and acquired KG and Allen. For now, there doesn’t seem to be that kind of urgency. He seems confident that Tatum will be a Celtic for a long time. Even with the disappointing loss to the Heat in Game 6, ownership and management remain patient.

In his season-ending presser, Ainge said, “I never heard anything but how positive a culture it was and what a great team we had and it was such a joy to be around, what a joy it is to watch this team play. I thought the same way.”

Those could be the words of a man resting on his laurels, happy to have a happy team. After nearly two decades of experience cobbling winning rosters together, he understands that chemistry is the most vital part of team building. If there are going to be any parallels between 2003 and 2020, maybe they aren’t the similarities between Tatum and Pierce or a bench bolstered by youth.