Jaylen Brown and the difference between a star vs. a superstar

Brown has been the best Celtic early in the new season.

Share All sharing options for: Jaylen Brown and the difference between a star vs. a superstar

After measuring stick loss to Brooklyn that revealed just how far Boston is behind the veteran-laden Nets, Jaylen Brown preached patience. “It’s a journey. I know sometimes the media and the fans lose sight of that, but it’s definitely a journey. It’s ups and downs. It’s about the marathon, not the sprint,” Brown said after leading the team in scoring with 27 points and 3 assists.

For Brown, that mindset is representative of his own personal journey. Even though he was the third pick in the 2016 NBA Draft, he was widely considered raw and a bit of a reach for Danny Ainge with more NBA-ready players like Buddy Hield or higher ceiling prospects like Dragan Bender. In four seasons, he transformed to an athletic freak to a more polished almost All-Star. He’s navigated a demotion from starter to second unit and confrontations with current and former teammates that have only steeled him as his four-year, $115 million contract extension kicks in. And now this year, he’s translating his leadership skills off the floor to being a franchise cornerstone on the parquet.

“I’m embracing the new challenge of a new role and opportunity, just trying to get better each and every year,” Brown said about being one of the major focal points of the Celtics’ offense.

In the first two games against two high quality conference opponents, Brown is averaging 30 points per game on 49% shooting, 6.5 rebounds, and 3.5 assists. He’s putting up a whopping 24.5 shots per game; last year, he averaged 15.6 FGA’s, up from 10.7 and 11.5 in 2019 and 2018 respectively. Without Gordon Hayward and Kemba Walker (until at least mid-January), Brown has looked the part of NBA superstar.

One of the knocks on Brown’s game coming into the season was his handle. He still isn’t a shifty off the bounce, but he’s developed enough of a dribble so that if he can get his defender on his hip, he can change pace and probe defenses. So far, Brad Stevens has used him in similar sets that Hayward utilized to get him in the middle of the floor in decision-making positions.

Against Milwaukee and Brooklyn, Brown faced two very different defenses and found ways to be effective against both. The Bucks play drop coverage on pick-and-rolls with their big retreating deep into the paint to protect the restricted area. That opens up space for ball handlers around the free throw line.

Decisions like dumping it down to Tristan Thompson on the short roll after drawing Brook Lopez’s attention aren’t spectacular. However, Brown has to master the simple if he’s going to lift his game and more importantly, the supporting cast around him.

The Nets, on the other hand, switch most perimeter action. That can stymie ball and player movement and puts more of an onus for teams to take advantage of smaller cracks in the defense and tighter shooting windows.

Again, these are spots in the game that Hayward used to excel in. Unlike Lopez in the previous clip, DeAndre Jordan switches on to Brown after Tristan Thompson picks off former teammate Kyrie Irving. As soon as Brown has a foot in the paint, he draws four defenders and calmly hits Marcus Smart cross court in his shooting pocket for the corner 3. If teams are going to collapse on him, Brown has to make those higher level of difficulty passes and so far, he has.

To wit, last season, Brown made 190 passes to teammates for three-point attempts (3.3 per game). To start the year, he’s already generated eleven. After a year where he averaged only 2.1 assists per game, he’s racked up seven. Understandably, it’s only two games, but Brown already recognizes and embraces the alpha role.

“My usage rate is higher, the ball is in my hands with a lot more responsibility. The difference is obvious,” Brown said.

Brown’s usage rate has ballooned from 24.5% in 2019-2020 to 34.1% and it’s hard to ignore the early returns and how it has affected his shot chart. This will certainly look different after seventy more games, but there are some trends forming. When the team was healthy last year, Brown feasted on being the third and sometimes fourth option. Out of the Five Best lineup, he had by far the highest percentage of buckets assisted at 60%.

One glaring difference was baseline threes. Those corner shots are usually generated by penetration and kick outs and with more talent on the court, Brown was a key beneficiary. He’s tried one in 68 minutes to date. 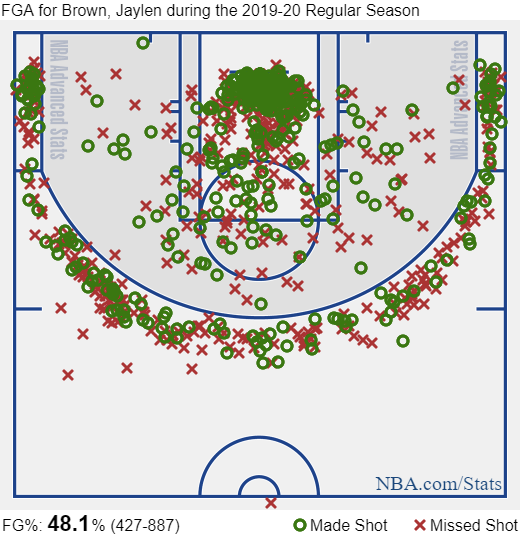 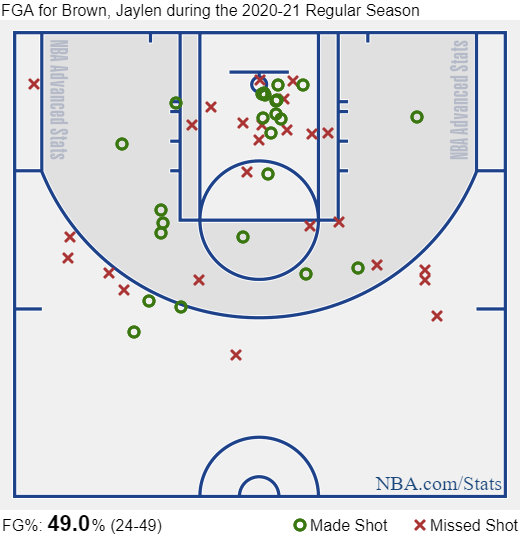 To hammer home that point even further, with nearly nine more shots per game, Brown’s total three-point attempts per game have stagnated at 6. The burden of operating as a facilitator has eliminated the easier looks. We’re not talking about the influence of a great shooter’s gravity or big man that can set bone-crushing screens. Brown is now one of the engines of this team and he knows it.

Brown’s biggest transformation may be as team leader. It’s a bit of a sports cliche, but going forward, Brown will be charged with making his teammates better and eventually, winning and hanging Banner 18. “Guys are gonna get more comfortable in certain roles,” the 24-year-old said after the blowout loss to the Nets at TD Garden. “We got a team with a lot of fight, so I’m looking forward to the next few games and building with this group that we have.” If the Celtics take his lead, they’ll be in good hands.