In a series between two evenly-matched teams, coaching adjustments were always going to be a big factor in which franchise moved on to The Finals. In a do-or-die Game 3, it was Brad Stevens’ moves that turned the tide for the Celtics.

After Goran Dragic torched Boston in Games 1 and 2 for a combined 54 points on 55.3% shooting, Stevens put Marcus Smart on the Heat guard, moving Kemba Walker as the primary defender on Jae Crowder.

It wasn’t the first time Stevens had turned to Smart to shut down a guard in these playoffs. Against the Raptors, Kyle Lowry dominated Games 3 and 4 by consistently getting inside the paint to help Toronto even the series at two games apiece, but in Game 5, Brad stuck Smart on the Raptors’ All-Star and held him to just 10 points en route a crucial Celtics victory.

His decision this time around provided almost a carbon-copy outcome, with Boston (and Smart) holding Dragic to just 11 points on 2-10 shooting, as the Celtics finally managed to close a game against the Heat and clawed one back to trail 2-1.

Brad Stevens on switching matchups to start the game: "Marcus' (Smart's) ball pressure on (Goran) Dragic was important. It's something we need to continue to look at. Marcus did a great job on a guy who is playing better than I've ever seen him."

The run that likely triggered Stevens’ decision to shift Smart onto Goran was a horrific 12-minute stretch following the start of the third quarter in Game 2. With the Celtics up double digits, Miami went on a 37-17 run in which Bam Adebayo had more dunks than the Celtics had made field goals.

The Heat stifled Boston with their zone, and the C’s looked powerless to stop Bam rolling to the rim. But while Adebayo was the one finishing off those plays, they couldn’t prevent Goran Dragic or any other guards from penetrating the paint. Over 70% of Adebayo’s made field goals were assisted, so stopping guard penetration subsequently limits Adebayo’s impact.

Smart was an All-Defensive First Team selection this season, and he has clearly established himself as one of the best defenders in the league at the guard position. Against Dragic, he showed all of that defensive prowess, hunting out screens and, on many occasions, picking up Goran right as he crossed the halfway line. His ability to sense and get around screens stifled a lot of the Heat’s primary pick-and-roll actions and made it a lot harder for Dragic to get inside the paint. The difference in Dragic’s shot chart from Games 2 and 3 shows just how much better a job the Celtics did on Saturday night. After allowing Dragic to score 10 points at the rim in Game 2, Goran wasn’t even able to get a shot off in the restricted area. 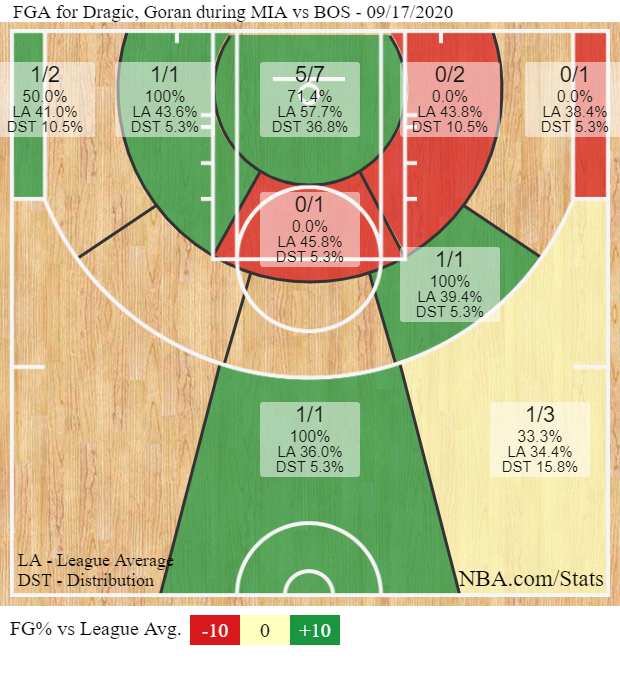 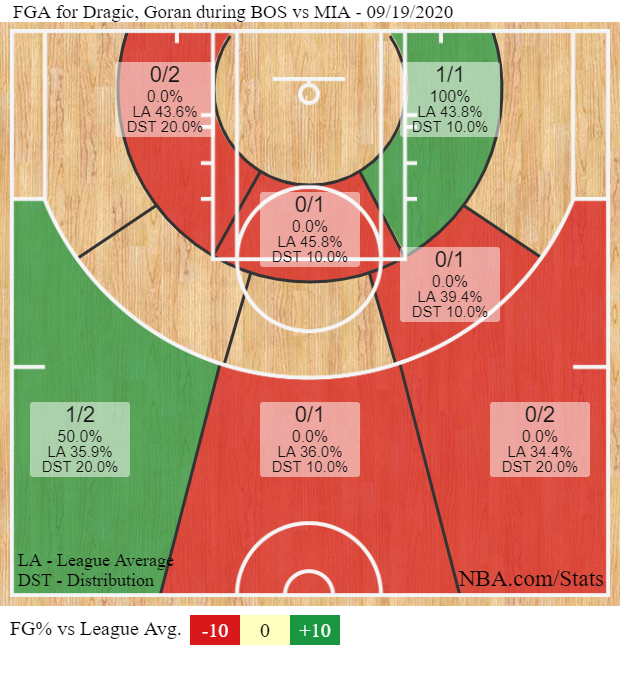 And while Smart matching up with Dragic prevented Dragic’s penetration, Stevens made some other small tweaks that were crucial in slowing down the pick-and-roll game. He had Daniel Theis much higher at the level of the screen to stop Dragic from getting downhill.

Take a look at the difference in Theis’ positioning on these two clips. In the first one, from Game 2, we can see Theis retreat quickly as Dragic rounds the corner – allowing the guard to easily penetrate and find Bam for the open dunk. There’s very little pressure on that pass from Dragic, and one that he’s comfortable making every time down the court.

Let’s juxtapose that with this clip below from Game 3. As Goran goes around the screen, Theis is moving laterally rather than backwards and is set up right at the level of the pick – preventing Dragic from getting momentum and going downhill. Instead, here they’re able to trap him in the corner and force the turnover.

The one other adjustment that helped stop the Dragic-Bam pick-and-roll was the fact that the Celtics were a bit more willing to help off shooters in the corner. In the second half of Game 2, the Celtics face-guarded Duncan Robinson right on the three-point line after his first quarter explosion, and Robinson’s gravity was a big reason why the Heat went on that 37-17 run. With Brown pre-occupied by him out on the arc, he wasn’t able to help and rotate on the pick-and-rolls, which left Walker and Theis stranded.

In Game 3, Brown was a far more willing helper. This would have been an easy lob if Brown was face-guarding Robinson as he did earlier in the series, but instead Brown helps off Duncan in the corner and is able to get up and affect the lob and force the turnover.

Brad Stevens’ defensive adjustments helped the Celtics contain Dragic and get the win in Game 3, but he will have to continue to adapt and make changes if Boston is to make it out of the Eastern Conference Finals.