Three’s company: Boston continues to build from ground up even with potential Big 3 on horizon

Fans are thirsting for another Big Three in Boston, but this Celtics offseason could suggest a more traditional path to team building.

Share All sharing options for: Three’s company: Boston continues to build from ground up even with potential Big 3 on horizon

Human beings love the number 3. There are three sides to a triangle, the most stable of all geometric shapes (this is why trusses are made of triangles). In many of the earliest known languages, it’s the highest named number. Basically, whether we’re dividing things into a beginning, a middle, and an end or grouping Egyptian deities, as long as we’ve been organizing things, we’ve gravitated toward the number 3.

Even when it doesn’t make sense.

In recent years, a vocal subset of Celtics fans have spent off-seasons constructing imaginary future rosters, and these rosters tend to congeal around the idea that the C’s need to have a “Big Three” in order to contend for a title.

The latest version of this phenomenon has tended to center on how Boston can add Bradley Beal to the team, pairing him with Jaylen Brown and Jayson Tatum. Many of the takes on the C’s off-season maneuvers hinge on whether the moves leave the front office in position to land Beal either through a sign-and-trade or by clearing the decks and signing him outright in 2022. 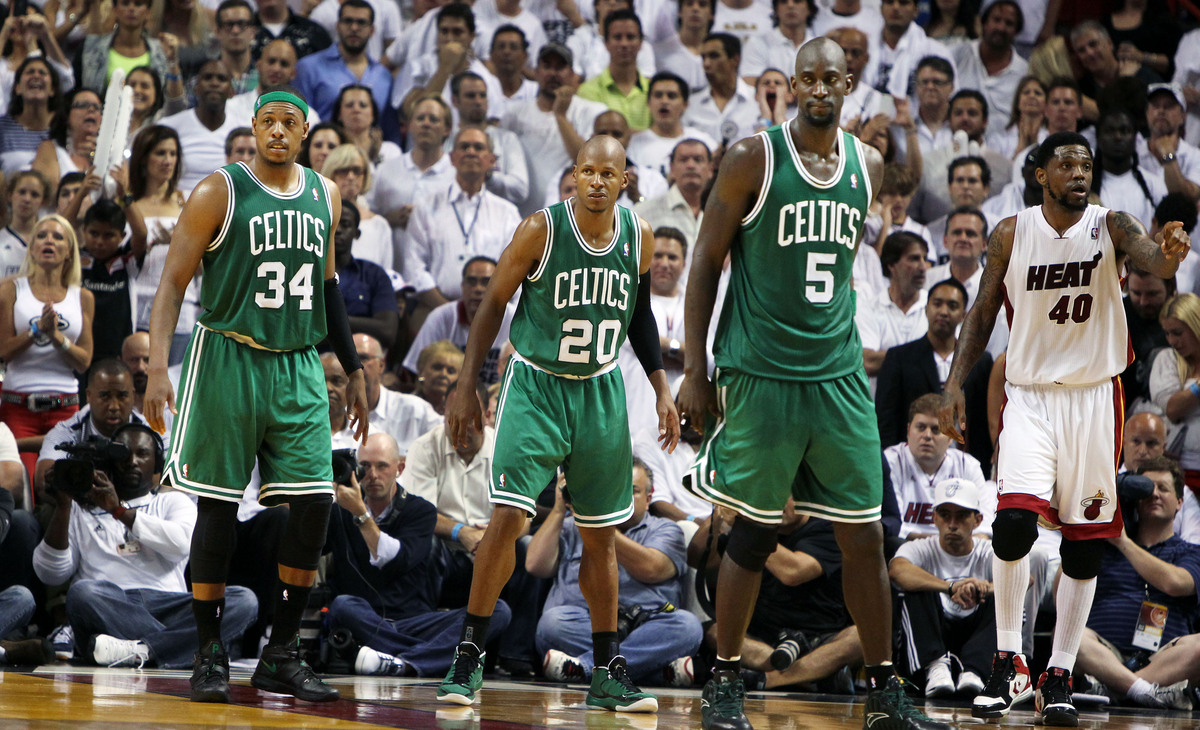 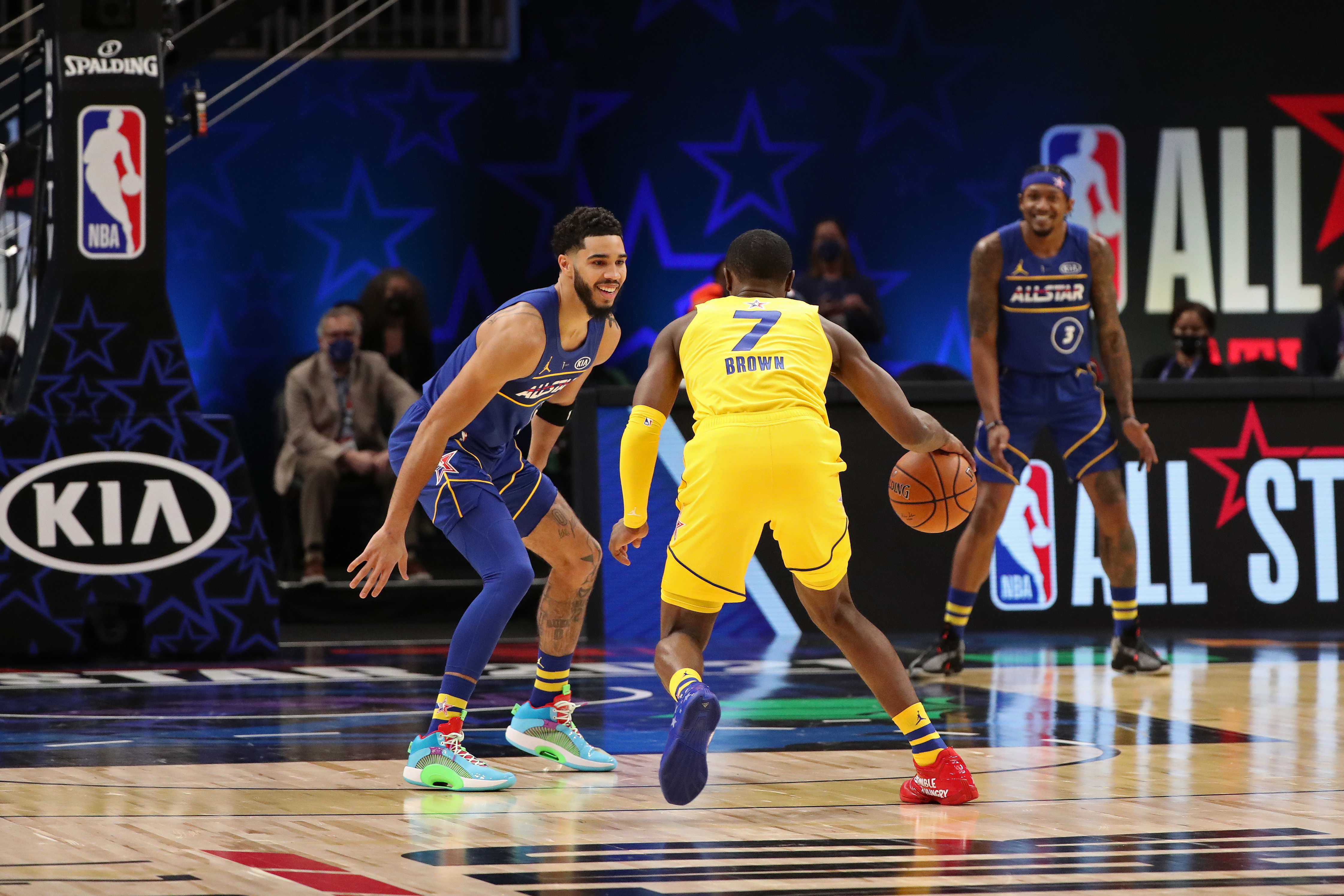 This notion that the C’s need a Big Three to contend for a championship is, superficially, reasonable. Fans quickly point to Ray Allen, Paul Pierce and Kevin Garnett, and, earlier, Bird, McHale and Parish. If an example outside the Celtics is needed, Lebron, Bosh and Wade for the Heat are a convenient choice—other fans might opt for Tony Parker, Manu Ginobili and Tim Duncan, or Steph, Klay and Kevin Durant.

As an example, consider the Celtics’ last “Big Three”: Pierce, Garnett and Allen. While it’s true that the C’s failed to return to the Finals in 2009 in no small part due to Garnett’s knee injury, the “Big Three” were in good health all the way through the 2010 Finals run. That they didn’t win their 18th championship that year had more to do with Kendrick Perkins’ knee injury than anything else (except the very real possibility that Doc Rivers is a horrible coach in clutch situations). In 2011, the Big Three were, once again, healthy and their loss to the Heat had more to do with Rajon Rondo’s injury than anything that happened to Pierce, Garnett and Allen.

What everyone remembers about the 2012 playoff run is LeBron’s breakout performance in Boston in Game 6. But go back and take a look at the box score from Game 7. Boston got two points from their bench, and the C’s were forced to play Brandon Bass at center during the entire series because the two O’Neals they signed in the offseason to provide big man depth were both down with injuries.

The point is when the “Big Three” Celtics fell short it was, more often than not, due to issues with the rest of the roster.

I could go on at length by showing how the Lakers teams assembled by Jerry West were never “Big Three” teams, and that the same goes for Auerbach’s teams. Retroactively defining the 80’s Celtics as a “Big Three” ignores the fact that Cedric Maxwell was the Finals MVP in ‘81, that Dennis Johnson was instrumental in limiting Magic Johnson in 1984, and that arguably the greatest team ever assembled, the 1986 Celtics, were certainly more than just Bird, McHale and Parish.

As it relates to the construction of the Celtics roster going forward, I’m going to be honest: gutting the team in order to add Bradley Beal is essentially trading substance for sizzle. It’s punting on proven methods of assembling a championship caliber roster in order to implement a fan’s conception of what a championship team should look like.

Recent history provides several examples of teams that were constructed without a “Big Three.” The Milwaukee Bucks, for one, do not have a “Big Three.” Now, arguably, the Bucks—as was probably the case with the Lakers last year—benefited from COVID weirdness that made the past two seasons significant departures from the regular NBA routine, but going farther back, the Raptors did not have a “Big Three” in 2019, and the Warriors did not exactly have a “Big Three” before adding Durant, and that team managed to rattle off 73 wins. The Warriors, of course, ultimately lost in The Finals to a team that could hardly be described as having a “Big Three,” unless the concept is stretched to the breaking point to include Kevin Love.

Of course, it could be argued that the teams listed above (2021 Bucks, 2019 Raptors, 2015-16 Warriors and 2016 Cavs) were pretty much one-hit wonders, and that the only sustained success over this period came from the Heat (titles in 2012 and 2013) and the Durant Warriors (2017 and 2018), but even here, the difference is between winning two titles and winning just one. Dynasties are not exactly made by winning two titles.

A more constructive example would be the Spurs from 1999 to 2014. While the Lakers won the same number of championships in a shorter period (2000-2010), they also had a nearly complete roster overhaul halfway through that run. And even if one chooses to focus on the 2000-2010 Lakers instead of the Spurs, the point remains the same: these were not “Big Three” teams.

Building a team for the long haul, as R.C. Buford and Popovich did in San Antonio, or as Red Auerbach did in the 60’s and 80’s, requires assembling a deep roster, not just putting a trio of stars together along with a bunch of filler material. While trades can add key pieces, as was the case with Dennis Johnson and Robert Parish, these long-running dynasties (and you can throw the Bulls into the conversation too if you like) were built primarily through the draft. Now it’s not a given that the Celtics will hit with all of their draft picks, but they have assembled a core that shows some promise of maturing into a solid supporting cast for Jaylen and Jayson.

While there’s a tendency to set low expectations for the C’s upcoming season on the basis of last season’s results, such a move hardly takes into consideration the fact that the C’s best five players shared the court for all of 111 minutes in a 3,476 minute long season (that’s a measly 3.2%), and that for much of the middle of the season, Tatum was still recovering from COVID. Plus, many of these young Celtics are at a point in their careers where we can expect significant year-over-year improvements. Unlike the veterans that have signed on with other teams in search of a ring, we don’t know what the Celtics have in their rookie contract players.

Time will tell if, say, Aaron Nesmith’s career ends up more like Charles Bradley’s (the C’s first round pick in the ‘81 draft, who played three seasons of NBA ball) than Danny Ainge’s (the team’s third round pick that same year). The same goes for the guys like Romeo Langford, and Payton Pritchard. But the C’s have two things going for them right now: 1) they have quite a few potential rotation players under team-friendly contracts and 2) these guys are in roughly the same age cohort as Tatum and Brown. There’s a real opportunity for these young rotation players to develop skills that complement the Jays, creating the core of a long-term contender.

So, while a subset of C’s fans are upset because Smart’s extension will keep the team from clearing the books to sign Beal outright next summer, I’m pleased that the team locked up a championship caliber contributor in Smart—and that is exactly what Smart is: he could not be the best player on a championship team, but you’re not going to win a title without guys like Smart on the roster.

Signing Robert Williams III to a second contract is likewise an indication that Brad Stevens is committed to building a championship team from the ground up, not spending a fortune on three guys and relying on the unpredictable world of veteran minimums and tax payer’s MLE players to round out the roster. I believe, and it appears Stevens does as well, that it would be shortsighted to ditch this developing core in order to acquire a “star” who has grown tired of wherever he’s playing right now.